According to the latest retail foreign exchange (FX) dealers (RFEDs) data released today by the US Commodity Futures Trading Commission (CFTC), retail FX funds held at registered brokerages operating in the United States has increased by 6.4% MoM in July 2015 compared with the month of June.

The monthly gain in July 2015 pares last month’s overall decline in total retail FX obligation – June 2015 saw a net decrease of -1.4% for all brokerages operating in the United States.

For the month ending July 2015 however, total retail FX obligation increased by 6.4% MoM from June 2015. Moreover, virtually all brokers notched increased in the amounts of FX funds they held in July. With volatility taking over the markets in August, the figures from last month, which will be published in October may be even perkier.

The notable exception was FXCM (NYSE: FXCM), which saw its FX funds about flat with a meager decline by -0.3%, while deposits at all of its major competitors in the U.S. market rose. Leading the swell MoM was Interactive Brokers, which saw substantial growth of 57.7% MoM from June 2015. With recent volatility in the monthly figures for Interactive Brokers, the numbers are becoming less of an indicator about the FX business of the company.

FXCM Inc (NYSE:FXCM) remained the biggest player in the US FX market with 31.5% of the market, down from 34% in June 2015. Interestingly, GAIN Capital and OANDA market shares also declined due to the substantial increase in the figures for Interactive Brokers. 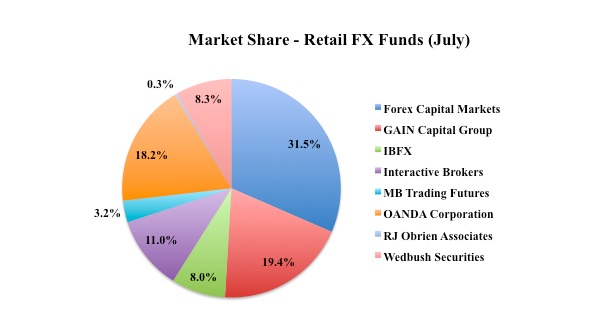 Share this article
Tags: CFTC / fcm
Got a news tip? Let Us Know

Its a continuous sales loop work for all retail outlets. The churn rates require strong sales teams to keep on generating new deposits.