One of the global leaders in financial services and banking, Zurich-based UBS, has announced its intent to outsource its fixed-income trading platform to French outlets in a bid to reduce outgoing expenditures and grapple the heightened financial regulation facing the foreign exchange industry, via a UBS statement.

Indeed, given the duality of objectives, UBS ultimately decided to utilize a pair of French software companies in a purely monetary move – the decision itself does help maintain more competitive cost-cutting measures. In essence, the move echoes the previous sentiment radiating out of UBS back in 2012 in which the company reported its intent over a three-year window that would ultimately result in a partial withdrawal or schism in its fixed-income operations. Alternatively, the move also comes at a time when nearly every global leading financial institution is under the microscope, under investigation for a lingering forex scandal that has already roiled the industry.

For this reason, the move is endemic of a larger issue and clearly heralds the new weight assigned to regulation and transparency by UBS. The decision to scale back operations also aims to foster risk reduction and less of a willingness for banks to trade for their own accounts, the genesis of the recent forex probe. 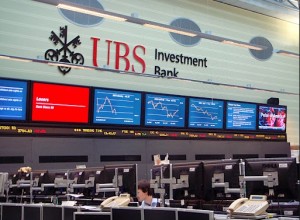 Fixed-income units can best be described as a collection of financial instruments most widely used by traders. These can include foreign exchange, commodities and debt and bond fixtures, all of which remain vulnerable to the specter of regulation for a multitude of reasons or precautions. According to Rainer Shierka, an Analyst at J. Safra Sarasin, “The move to outsource is in line with UBS’s strategy for their fixed-income arm and with the streamlining of fixed income as whole.”

However, UBS’s plans to maintain a competitive edge in the forex and fixed income industry are hardly a novel concept. Societe Generale recently announced its own plans to outsource its back-office operation to Dublin-based Accenture in an attempt to lower its banking costs.

The French software companies UBS is said to outsource to are Murex and Ion Trading. Founded in 1986, Murex employs over 1,700 specialists providing integrated trading solutions to 200 clients in worldwide capital markets. Ion Trading offers the ION.NET trading interface, enabling traders to access more than 100 electronic markets in a single view. The company reports that over 3000 traders use its ION frontend solutions globally while tens of thousands rely on the platform for their day to day trading.