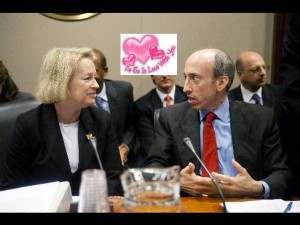 I reported about this intention (which to me makes a lot of sense) couple of months ago. I even suggested a new and catchy name for the merged entity – how about SECFTC?

Some of my pro-merger arguments were that the merger is logical because both agencies oversee financial instruments: The SEC deals mostly with exchanges and the CFTC with commodities. Having two separate agencies doesn’t really make sense and only creates double standards like the ability to operate a Forex brokerage under an SEC umbrella and not under CFTC/NFAs one.

It is clearly that SEC has much more regulatory experience and is more balanced in its requirements.

Financial News reports that the Options Clearing Corporation (OCC) is planning to back a merger between the Securities and Exchange Commission (SEC) and the Commodity Futures Trading Commission (CFTC). Several U.S. exchanges will testify at a meeting in Washington on Sept. 3., regarding regulatory changes in the markets.

The OCC believes the current regulatory structure for derivatives is not optimal for financial markets. The OCC’s stand is against that of the CME Group, which will oppose the merger. Craig Donohue, CEO of CME, is expected to testify at the hearing.

Timothy Geithner, the new Treasury Secretary, was rumored to have said that at the time that the merger won’t happen.