Business competition can get fierce. Since launching Finance Magnates, I’ve seen competitors exchanging jabs on comments, poaching each other’s employees and launching thinly-disguised predatory campaigns. But even the most bitter (or desperate) business rivals retain some semblance of self-respect and maintain at least a minimal level of business etiquette.

Unfortunately, this is not the case with a certain publication which has been showing a great deal of interest in Finance Magnates. As opposed to Reuters, Bloomberg or Business Insider, it is not our data or exclusive stories which are exciting our so-called peers in the living room from which they operate.

I’m referring, of course, to Leaprate and its blatant, disrespectful, and ridiculously distorted email blast from yesterday.

Up until now, I have not taken the trouble to reply to any of the nasty posts or remarks made by Mr. Gerald Segal (hereinafter “Leaprate Staff”, the name this beacon of transparency prefers to go by), as we believe in doing our own thing as best we can. Throwing mud has never been our style, and we don’t need such rhetoric in order to stay relevant or beg for new business.

But my strong commitment to Finance Magnates’ team, partners, clients, and most importantly readers, now compels me to set the record straight.

I was made aware of this audacious email, which was sent to Leaprate’s subscribers: 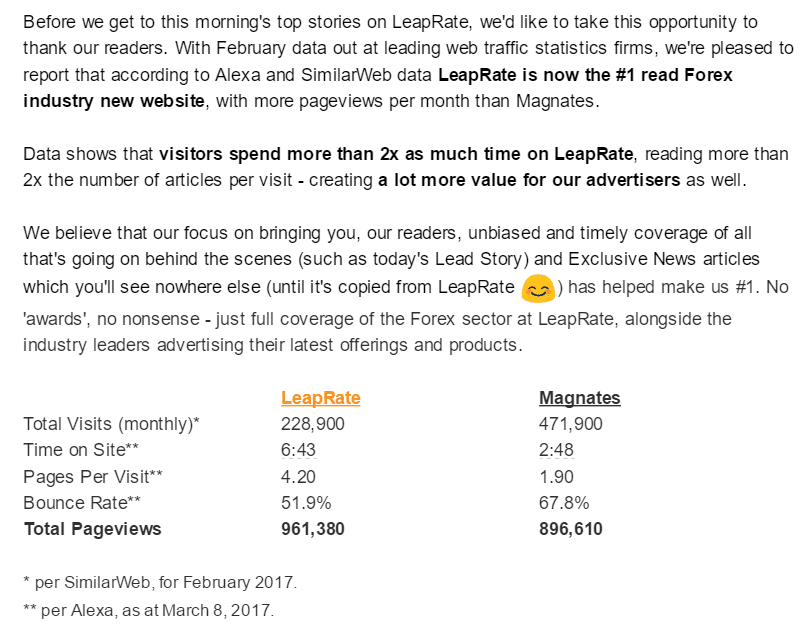 Quite promising. There is only one problem with this impressive number-crunching: it is selective. And misrepresents the facts. And is downright false. OK, there is more than one problem with it.

Let’s go over them real quick.

Alexa, for all its problems, does some things better than others. These include analyzing “relative measure of popularity, rather than an absolute measure of traffic” (by their own account, see in comments). Similarweb, on the other hand, while not a perfect tool either, is considered to fare slightly better on sheer traffic size.

And yet, in order to produce a total pageviews figure, the makeshift “dataset” inexplicably omits some of SimilarWeb’s numbers and awkwardly plants those of Alexa instead.

Perhaps it’s because when comparing apples to apples, according to SimilarWeb, FinanceMagnates.com earned 1,015,720 pageviews in February (including our Russian website) while Leaprate Staff’s place of work received 503,580 (I followed the method of multiplying pages per visit by total visits).

This is as far as getting the numbers right is concerned, even by Leaprate Staff’s own skewed terms. No small feat for the “#1 most read forex news” site in one of its strongest months ever. I leave it to you to consider how the numbers look when we add to the mix the close to 2 million pageviews of our ForexLive.com site.

This one is short and simple: February appears to have been a particularly strong month for our friends. Fair enough, it was indeed a turbulent time, what with the developments at FXCM and other stories. But if you exclude this one-off month and look at the downward trend, you are left with the size of our Russian website alone.

Once again, the importance of seeing the whole picture is clear.

Lending support to this more consistent view are some additional variables, which attest to content portals’ strength and activity: 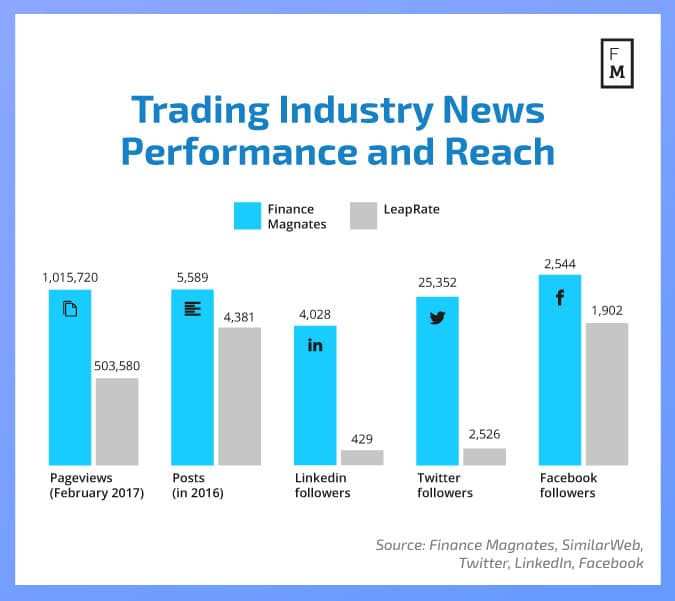 But the mere numbers, despite being very clear when honestly presented, don’t tell the full story.

This is where the hateful stuff comes into play, implying that our conferences are “nonsense”. It is perfectly clear where this is coming from: since LeapRate tried and folded its own shortlived attempt at organizing conferences back in 2014 (unless it was in fact intended to promote our own event in Tel Aviv), the portal appears to be leading the industry into quite a bleak future. 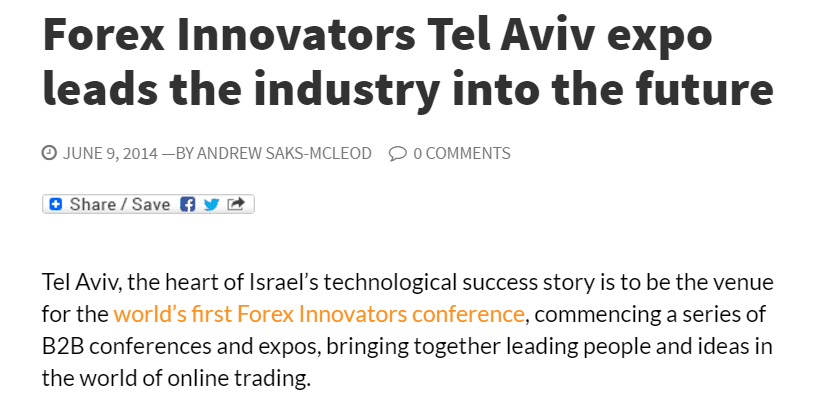 But it feels awkward for another reason. I take great pride in what Finance Magnates has achieved by venturing out of the newsroom and into our Summit and Expo venues, where we meet thousands of industry participants. Aside from anything else, our events have proved incredibly valuable for the quality of our news coverage.

This shouldn’t come as a surprise. My experience tells me that being savvy about crawlers and alerts is simply not enough; if you are, as my fellow journalist boasts, “proud to work remotely and telecommute from leading forex centers worldwide including the UK, the US, Canada, Israel, Australia, Bulgaria, Cyprus and China” (an impressive reach for two and a half reporters, imagine the travel expenses!), it’s simply not going to work.

Copy/pasting company updates from Companies House in the UK and mailing them as exclusive stories is hardly journalistic work – as opposed to conducting a thorough editing and fact checking process, including, believe it or not, actually reaching out to the companies that we report on.

It’s not going to work because it is virtually impossible to become a credible, in-depth news service for any industry without the groundwork. This is as true for journalism as it is for business. Sure, you can have a blast here and there with a snappy title (“Kenyan forex broker cries “Regulate us!” comes to mind), but you don’t build a consistent strategy by picking up the phone and trolling “sources” about working with competitor.

None of this seems to bother our friend, who has long been such a proponent of accuracy and objectivity that he posts such masterpieces as “IronFX CEO Markos Kashiouris separates fact from fiction – LeapRate Exclusive Interview” (the fact separated from this story being that IronFX owe clients $170 million, but if you indulge fiction read that whole post).

And let’s not forget “Fortress Prime still in business – the real story” (the real story is that they shut down, leaving tens of millions in debts to clients).

There are many more.

I thought about ending this post by earnestly congratulating Leaprate Staff for embracing cutting-edge technology, as their work gives the impression that they are prone to wearing VR glasses whilst punching their keyboards in whatever coffee shop they are operating from.

But this is not funny. The undignified, almost childish approach taken by those who purport to be “#1” is regrettable, and would usually be unworthy of comment.

However, in the era of post-truth, I believe that fake news should be addressed vigorously. Considering the ongoing stream of rigged figures, half-truths and fairly illogical hostility (it is us who should resent them for imitating the niche we’ve created!), I felt obligated to step in and set the record straight.

What we do at Finance Magnates is too important to allow awkward haters to besmirch our name unchallenged.

Share this article
Tags: Finance Magnates
Got a news tip? Let Us Know

LeapRate can do what it likes, but taking jibes at FinanceMagnates every now and then, only makes them look a bit childish.

Why so sensitive? The need to respond speaks volumes…underscores Leaprate’s standing.
You need to improve your offering as it is embarrassingly amateur in comparison. No amount of hype
and lipsticking will obscure the obvious. Your unprofessional cheer leading of all things FXCM is all that need to be pointed out.

Don’t skewer Gerald for your shortcomings.

Thanks for engaging. No sensitivity, the comment was warranted due to serious info discrepancies in the original (the nasty tone, not unlike this comment’s, was not new).

Personally I prefer reading about binary bashing on Finance Feeds.

fun read indeed, except – they bash only some binary not all, one may wonder why?

finance ragmates, what is the problem i wont read anymore… this site says multi-asset trading news with special focus on electronic trading, banking, and investing

but i dont think ne1 at this rag mates, has worked in multi-asset trading businesses, traded or held banking or investing positions professionally, i will get my finance news from Bloomberg thank you

I remembered the IronFX headline. I googled it and I noticed that Disqus has its own thread on it. What was unusual is that Leaprate’s article removed the comments section. This isn’t the first time I noticed this behavior where if comments threaten an advertiser or someone with a [financial] interest that they are suddenly deleted or some “technical error” occurs. The article by Advanced Markets differentiating between bucketshop and Prime Brokerage had some very good follow-up discussion. It’s funny that the comments section tends to bring MORE traffic and potential insight into a situation. There are a lot of… Read more »

This article is very nice. Personally I prefer reading about binary bashing on Finance Feeds. Every trader can be benefited by this article.