As the weekend draws near and the frequency of news diminishes, Finance Magnates editors share some of their off-the-beaten-track reading recommendations.

In this new series, we somewhat liberate ourselves from the rigid time and agenda confinements of the newsroom, and refer back to stories and articles that we found thought-provoking, indulging or otherwise outstanding, providing a unique perspective into fields that we take interest in.

This week, the articles that caught our eye had a common theme of technology and its effect on human behaviour.

Feel free to share in the comment section your thoughts on these articles and any recommendations of your own.

I will recommend you read “Sorry to have to tell you this, but the world just came to an end” by Spengler.

The writer is an economist and a hedge fund analyst which I read mainly for his brilliant insights about the Chinese and American economies.

All too often he breaks from economic writing and goes off into completely unpredictable directions. In this instance, he applies his deductive skills, vast cultural knowledge and love of statistics in explaining how virtual reality games will bring about the end of the human race.

Still in the emerging VR sphere, I cast my vote for ‘Virtual Reality Lures Media Companies to a New Frontier‘, a NYT story.

I can’t say I was an early adopter of virtual reality technology but out of curiosity I recently picked up the Google Cardboard viewer which costs a fraction of what other popular VR headsets are currently priced at, and was really mind-blown with how far the technology has come.

After running a few VR apps from the Play store on my Galaxy S6 device within the cardboard viewer, such as Titans of Space and Cosmic Rollercoaster, I felt hooked on VR and became a believer in its future prospects across nearly every industry where the technology could be useful.

Of the 133 virtual and augmented reality investments made in 2015, media companies participated in six

This app experiment I did was just several weeks after I had tried on a VR headset for the first time while attending the iFX Expo International in Hong Kong, where an exhibitor had a full-immersion setup that attendees could demo.

I later envisioned a future where traders may forgo the need for an entire physical trading desk by swapping it for a VR one where all the screens and trading platforms are displayed in high resolutions and react to users input virtually.

Such features may be quick approaching as progress is made into this field according to a related article that caught my eye this week from the NY Times which explains some recent investments that media giants are making into VR related companies, as the prospects for this technology are continually maturing.

“Not a single media company isn’t thinking about what happens when the rectangle goes away,” says Jules Urbach in the piece. The 41-year-old founder of Otoy refers to a future where videos are experienced in virtual reality rather than watched on screens. The article cited a CB Insights report which shows that of the 133 virtual and augmented reality investments made in 2015, media companies participated in six.

An oldie but a goodie

Last weekend I was reading an old article in the New York Times about a young PR executive and the Twitter post which ruined her life. Just before boarding an 11-hour flight to South Africa, Justine Sacco posted the following: 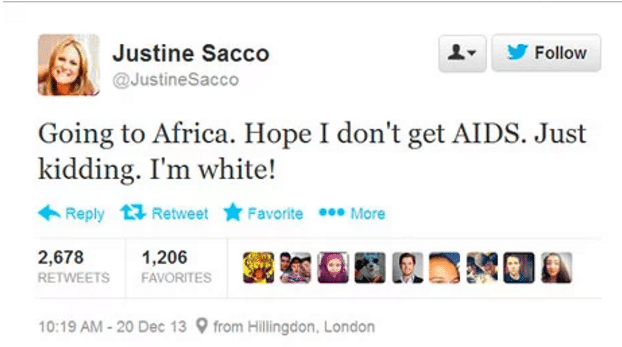 What’s your impression of this? Irony or racism? The Twitter community decided the latter. During Sacco’s 11 hours of radio silence, an online lynch mob gathered, publishing literally tens of thousands of outraged comments.

The unfortunate jokester lost her job during her flight, and one individual even waited for her to leave Cape Town airport in order to take and publish a photograph of her arrival. The effect on her personal and professional life was devastating, and her case is far from unique; as the article discusses, online crusades have resulted in traumatic experiences for many individuals.

I found the episode thought provoking. Putting aside a certain element of Schadenfreude which I’m sure I’m not alone in feeling while reading such a story, the article raises questions regarding the definitions of racism and satire, freedom of speech, and how social media has given the angry mob an omnipresence which makes it all the more terrifying.

Finance Magnates often reports on how social media can be a positive tool for business. But, as with all technology, misuse is always a danger. Tweet responsibly, kids!