Bitcoin and cryptocurrency markets have come a long way since the “magic internet money” days of the early 2010s and the speculative booms and busts of the last several years. What was once largely a playground for anarcho-capitalists, casual enthusiasts, and (in some cases) individuals partaking in illegal activities has become a thriving global industry.

The technological innovations that have been fueled by cryptocurrency and blockchain technology have the power to fundamentally re-orient and rebuild the world’s financial systems, and are increasingly being used to do so; at the same time, Bitcoin and other cryptocurrencies are becoming more popular for use in a growing number of circumstances.

In other words, the cryptocurrency ecosystem has a lot more “legs” than it used to: the influx of new users, institutional capital, and other kinds of investors have stabilized markets: while crypto prices still fluctuate, volatility has decreased over time, particularly in Bitcoin markets.

However, now that hype and speculation have less influence on prices in Bitcoin and cryptocurrency markets–what exactly are the driving factors behind the prices of Bitcoin and other cryptocurrencies?

“Now that Bitcoin is a ‘big kid,’ anything can make it move.”

Indexica, a firm that describes itself as “an interactive web-intelligence platform, leveraged to transform global events into quantified metrics, predictive indexes, and strategy signals,” says that nowadays, the drivers behind the price of Bitcoin are far more complex than they were in the past. Finance Magnates reached out to Indexica, but did not hear back before press time.

Speaking to Bloomberg, Zak Selbert, CEO of Indexica, said that “bitcoin is part of the financial landscape in a very intertwined and mature way.”

This is also evidenced by the effects that movements in the price of BTC seem to be having on other financial markets.

A 2018 study published in the Eastern Journal of European Studies by Mehmet Levent Erdas and Abdullah Emre Caglar, who are respectively an assistant professor and researcher at the Akdeniz University in Turkey, showed that there is a causality relationship between the price of Bitcoin and movements on the S&P 500 Index.

The researchers concluded that, therefore, “it can be suggested that a significant part of the investors in the S&P 500 market have sufficient information about the Bitcoin market, follow technological advances closely and that there is a lot of interest in computer applications which attract users’ attention. (sic)”

However, the study also noted that “However, it is observed that causal relations from negative to positive and positive to negative shocks do not exist between Bitcoin and gold, Brent oil, US dollar and BIST 100 Index,” and that at the time that the study was published, “Bitcoin [as a] currency does not seem to be significantly affected by macro-financial developments.”

Bitcoin markets: a history in brief

Adam Todd, Founder and CEO of Digitex Futures, went into a few more specifics on what exactly “anything” could be: the price of BTC–and crypto markets more generally–can be moved by “government regulation, key market influencers, thefts and hacks, crypto whales, pump and dumps, and even geopolitical forces, such as the US-China trade war or instability in Hong Kong,” he told Finance Magnates.

In other words, Bitcoin no longer exists within a vacuum–in its earlier days, cryptocurrency markets were relatively isolated from events in the outside world. There was no institutional capital flowing in and out of cryptocurrency markets; there were altcoins, but the ecosystem was much smaller.

In their earlier days, cryptocurrency markets seem to have consisted almost entirely of retail investors who happened to take an interest in this “magic internet money” and the small groups of people and industries–some of them illegal–that relied on Bitcoin to transact.

Then, roughly two years ago, a wave of speculative hype took over the crypto space: “two years ago, the market was much more sensitive to speculators, wild, untamed retail investor demand, and many scams, pump, and dumps, et cetera,” Adam Todd said to Finance Magnates.

And then–as you may or may not remember, dear reader–the speculative bubble that had formed at the end of 2017 unceremoniously popped. What followed was more than a year of stagnation and price doldrums, a period that came to be known as the “crypto winter.”

“In 2018, throughout the crypto winter, the prices seemed to be driven by a lack of use cases, by deflating expectations, regulation, hacks, and general negative sentiment,” Todd said.

Now, however, Bitcoin has been Indexica says that Bitcoin has become a much more complicated animal: according to Bloomberg, “the company found that Bitcoin’s price moves are being driven by competing digital currencies and new blockchain technologies.” Mastercard’s recent partnership with blockchain firm R3 was named as one example of this.

Indeed, it can be argued that it has long been implicitly understood that in crypto markets, what’s good for the goose is likely to be good for the gander: while a partnership between Mastercard (a well-known non-crypto payments company) and R3 (an enterprise blockchain software firm) has no direct association with Bitcoin, the fact that blockchain technology is being talked about in the context of something as huge and familiar as Mastercard could absolutely have a positive effect on the price of Bitcoin. 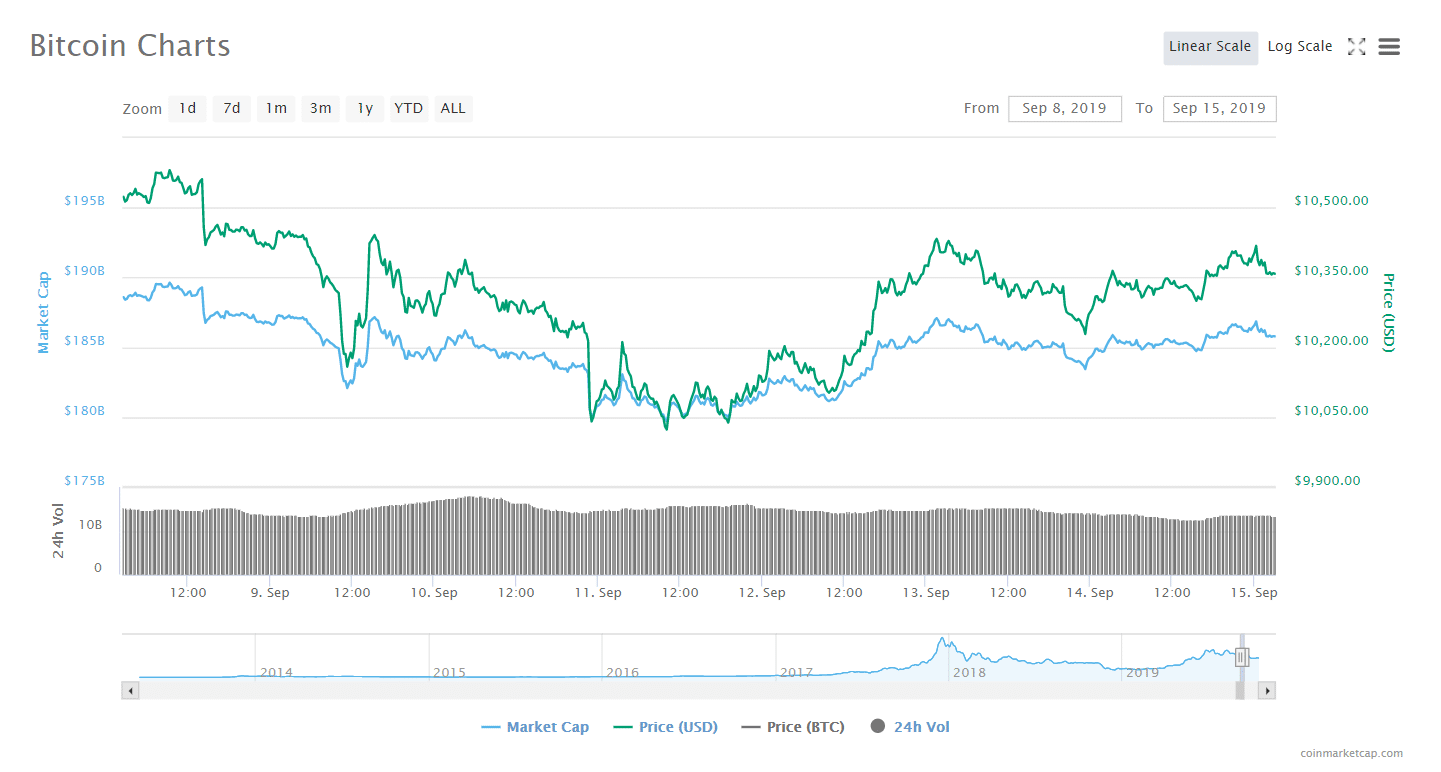 Indeed, Adam Todd told Finance Magnates that “prices can fluctuate greatly based on big announcements such as a large player coming into the industry, as we saw from Consensus earlier this year and Microsoft.”

Another example of this is the announcement of Facebook’s Libra project in June of this year. Less than two weeks after the project’s whitepaper was published in mid-June, BTC hit its yearly high of nearly $13,700. 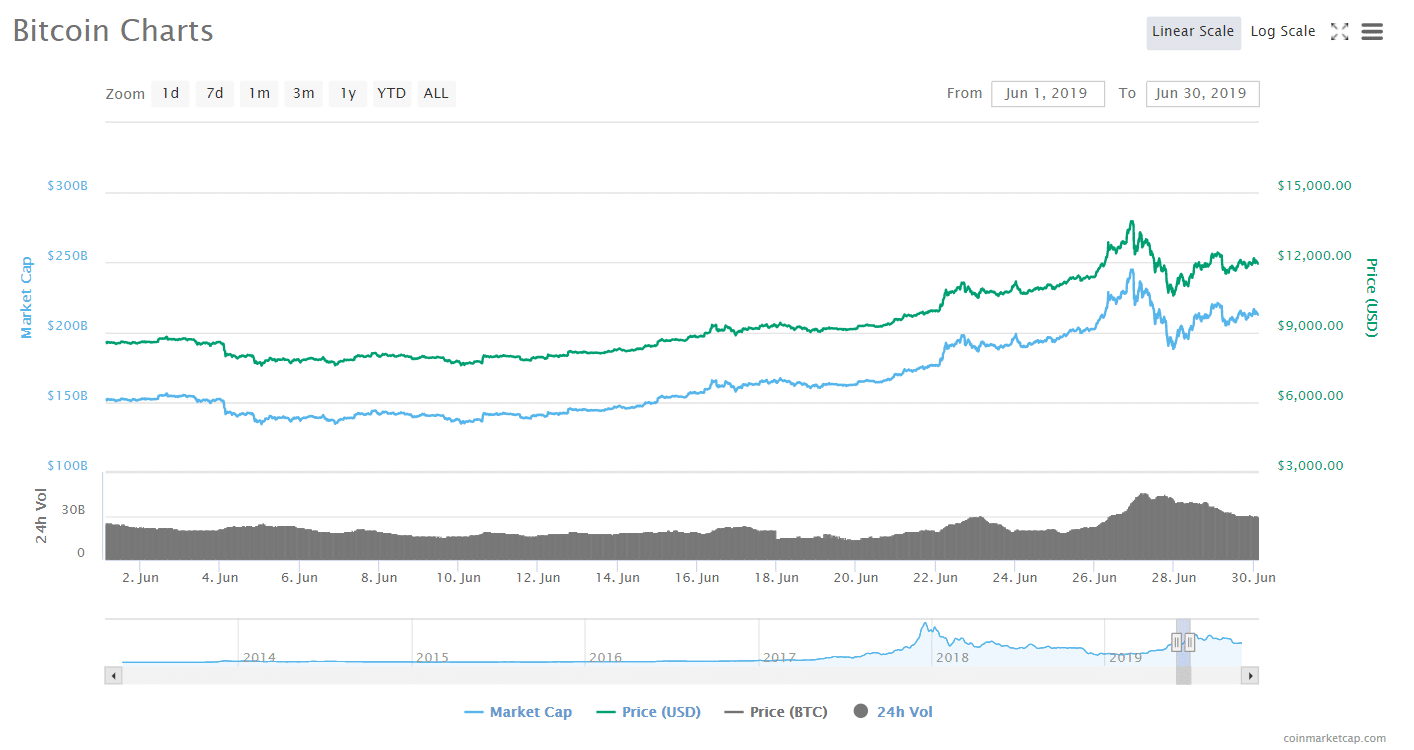 Is Bitcoin a “safe haven”?

Adam Todd also said that, in some ways, “investors are beginning to consider Bitcoin as a safe-haven asset like gold.”

“This would have been unthinkable two years ago,” he added. “The market is maturing and the price consolidation is showing this.”

However, not everyone agrees–Galen Moore, a member of the CoinDesk Research team, wrote in an article published last week that Bitcoin can really only be considered as a haven during “times of crisis.”

“A haven is in the eye of the beholder. Bitcoin may be a risk-on asset for venture investors in Silicon Valley, and a risk-off asset for people caught in a currency crisis,” Moore wrote, adding that “Bitcoin adoption in Venezuela is often cited to indicate the latter.” (It is.)

Outside of Venezuela, however, Moore also pointed to a possible correlation between periods of weakness in the Chinese Yuan (CNY) and the price of Bitcoin–when the Yuan wavers, BTC prices tend to see a small boost.

However, in most developed markets, most analysts agree that Bitcoin just does not have the legs to be considered as a safe haven asset. However, “that doesn’t mean it might not become a risk-off asset during the next downturn, or the one after that,” Moore said, pointing to the fact that Jerome Powell, Chairman of the United States Federal Reserve, once described Bitcoin as a “speculative store of value.”

And indeed, it is true that Bitcoin seems to be trending toward a level of lower volatility. “The market, especially Bitcoin, has seen some considerable consolidation in the latter half of the year,” Todd said to Finance Magnates. “It is less susceptible to announcements and happenings, FUD and hype. Bitcoin’s price didn’t crash after Bakkt’s lackluster launch, for example.”

Although Bitcoin markets are becoming less volatile and more mature, some analysts have pointed to the fact that the Bitcoin market cannot be compared to other kinds of assets in that a large amount of BTC is held in stockpiles by a small group of entities referred to as “whales.”

These kinds of large transactions can have major effects on crypto markets in and of themselves–but these effects can easily be magnified due to the fact that “the transactions… are closely followed by crypto-investors around the world,’ Shah explained. “Historically, such large transactions have shown accumulation by whales due to an undervaluation of the coin in the transaction; in these two cases: Bitcoin.”

Adam Todd added that whales are less likely to contribute to volatility in the Bitcoin market than in other markets: “most studies have concluded that the majority of these are good whales and hodlers that are unlikely to make sudden movements,” he said. “But if they do, they can have a massive effect on the price.”

However, “when it comes to other cryptos with smaller market caps, it’s almost ridiculous how much influence a whale can have on the price,” Todd added. “They can often inflate the price of a single coin just by themselves.”

Supply & demand is still the name of the game

At the end of the day, however, good ol’ supply and demand are still perhaps the most reliable indicators of crypto prices. Adam Todd told Finance Magnates that “just as in any asset class, the fundamental factors that drive prices in the crypto markets are supply and demand. As we have seen throughout Bitcoin’s previous bull runs, demand exploded and prices went up.”

Mitesh Shah added that crypto’s particular brand of supply and demand is primarily based on “the market psyche.”

Indeed, Indexica also found that sentiment was an important factor in price indicators: according to Bloomberg, “Bitcoin’s strongest predictive measure was its ‘quoteability,’ which showed that it was most often talked about in conjunction with more traditional currencies.” In other words, Indexica found the number of times that Bitcoin was mentioned and the contexts it was mentioned in were important indicators for BTC prices.