When Facebook announced that it was working on its own cryptocurrency at the end of 2018, the world was curious–but it didn’t seem as though anything was coming imminently. After all, hardly any details were known about the project for months; what was known was gleaned in pieces from job postings and leaked comments to the press.

Then, earlier this month, everything happened at once. Facebook released the whitepaper for the project, including details about the mission of the foundation that the cryptocurrency would be run by, the technical basis for the network, and the project’s name: Libra.

With the deluge of information came another wave of activity. When regulators got wind that Libra was planned for release in early 2020, they suddenly launched into motion.

While before, cryptocurrencies seemed like something of an afterthought to most of the world’s regulators, it quickly became clear that some kind of action needed to be taken; so far, responses from regulators have been laid on a spectrum somewhere between exploratory and reactionary

The Libra network has been designed as a blockchain-based payment network.

Libra coins are stablecoins, meaning that their value stays consistent; in order to achieve this, the coins are backed by a “basket” of various assets, the specifics of which are yet to be announced. Simon Taylor, GLobal Digital Finance, Board Co-Chair, pointed out that “while reserves ‘back’ Libra (GBP, EUR, USD) it doesn’t have a fixed peg to those currencies, so the value of Libra would move up and down against those other currencies,”

The network will be upheld and governed by 100 “nodes,” or entities that are in charge of confirming transactions and keeping the Libra blockchain online.

On other blockchain-based networks, the nodes are volunteers; on Libra, nodes were hand-selected by the blockchain’s parent company, the Libra Foundation, a subsidiary of Facebook.

Entities had to invest a minimum of $10 million in the project to become a node; so far, they include companies like Visa, Mastercard, and Uber. The limited number of nodes and the process by which they are selected has caused critics to claim that the Libra network isn’t truly decentralized.

Libra: We will “[collaborate] and [innovate] with the financial sector, including regulators and experts across a variety of industries.”

Libra has publicly stated that its motives are at least partially humanitarian–to provide secure and affordable financial services to those who don’t have access to them.

But along with this mission to “bank the unbanked”, Libra claims that its aim is to build a blockchain network that will “[collaborate] and [innovate] with the financial sector, including regulators and experts across a variety of industries” in order “to ensure that a sustainable, secure and trusted framework underpins this new system.”

And indeed, Facebook has made efforts to begin working with regulators around the world. Before the whitepaper was launched, Facebook had already been in talks with the CFTC and had been rumored to have had conversations with the US Treasury as well.

“Regulators have concerns,” said Cheryl Sandberg, COO of Facebook, in an interview with Bloomberg TV. “We’re already meeting with them. We know we have a lot of work to do, but this was an announcement of what we would like to do with a roadmap for people to jump in and help us do it.”

Reactionary responses in the US

The fact that Facebook had already taken steps to work with the US government may have made many US regulators’ reactions to the release of the whitepaper even more surprising.

“In the US several politicians have raised concerns regarding Libra,” commented Marc Boiron, Blockchain & Cryptocurrency Attorney, in an email to Finance Magnates, pointing to the Senate Banking Committee’s scheduled hearing regarding Libra on July 16. Congresswoman Maxine Waters (D-CA) publicly called for a moratorium on the project until the government understood more about the Libra network and its goals.

Other members of the house have also cried out against the project simply because of its association with Facebook. “Facebook is too big and too powerful,” said Sherrod Brown, a Democratic Senator from Ohio.

“I don’t know that people would have said that two or three or five years ago, but the public increasingly believes they’re too big and too powerful, particularly to engage in a risky cryptocurrency. Running a cryptocurrency system out of a Swiss bank is a big concern to people.”

Libra could be too large for comfort

But some analysts have developed other theories as to why US regulators may be reacting so strongly to Libra–in a piece for Foreign Policy, David Gerard explained that the fact that the US’ payment systems are so grossly outdated in comparison with Europe’s could mean that the network would make too big of a splash.

Gerard writes that for some reason, “America’s payment systems are bizarrely underdeveloped; chip-and-pin, the norm in Europe since the mid-2000s, was only broadly introduced in the last couple of years in the United States…Libra has no convenience to offer international users, and everything described could—and has—been achieved through conventional methods.”

Indeed, “for the world outside the United States, Libra’s fabulous future is literally the present,” Gerard writes, pointing to the parts in Libra’s whitepaper that describe how the network will one day be used for “paying bills with the push of a button, buying a cup of coffee with the scan of a code or riding your local public transit without needing to carry cash or a metro pass.”

So, Libra could potential bring a swift wave of big change to the States, and take up an accordingly large market share–this may be part of the reason why the regulatory reaction can be seen as stronger than in other places in the developed world.

Developing countries may be concerned that Libra could weaken national currencies

And although the Libra network is intended to provide financial services to “the unbanked,” regulators in some parts of the developing world have had the most extreme reactions to the Libra network of all. This includes India, the country with one of the largest remittance networks in the world–one that the Libra project has its eye on in a serious way.

On top of that, “Libra will be especially valuable in countries that experience more volatile currency pricing than the basket of currencies that comprise Libra,” pointed out Jeff Stollman, Principal Consultant at Rocky Mountain Technical Company, to Finance Magnates.

He added that although “the Indian rupee is not as troubled as the Venezuelan or Iranian currencies, it has been losing value versus the USD over time. This provides an incentive to consumers to buy Libra to reduce currency price risk.”

But so far, things aren’t looking too good for the project as far as its presence in India–the Indian government has cracked down on the use of cryptocurrencies and is currently considering a ban that could punish the use of cryptocurrency with a 10-year prison sentence. The concern seems to be that something like Libra (or another cryptocurrency) could further weaken the country’s sovereign fiat currency.

And if Libra isn’t allowed in India, the project could miss out on a huge opportunity. According to data from <em>Statista</em>, India is home to the largest number of Facebook users in the world. 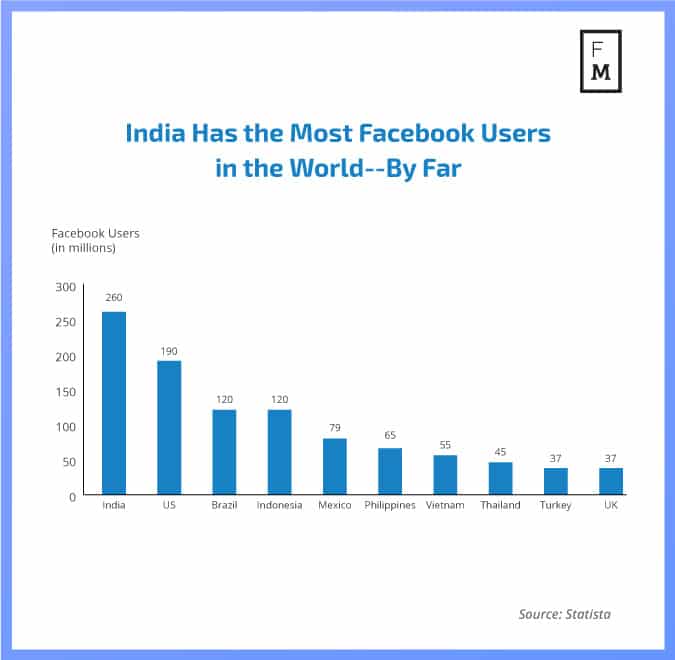 Will censorship have an effect?

Additionally, there are some major questions as to whether or not the Libra network will be allowed in countries like China, which have banned their residents from using Facebook.

And even if Facebook isn’t the issue, “there is also a high likelihood of places like China blocking Libra all together… [because of] the issue of capital controls in the country,” explained Agada Nameri and Yaniv Feldman, Partners at 21M Capital Blockchain Fund, in an email to Finance Magnates.

Stollman echoed their sentiments: “it will likely be about the country maintaining strong control of consumer behavior and international currency flows,” he said. This is also allegedly why China made the decision to institute a sweeping ban on ICOs and domestic cryptocurrency exchanges in late 2017.

Facebook hasn’t been banned in Russia, the country will reportedly block the usage of Libra, perhaps for similar reasons.

“Russia will not legalize the use of Libra cryptocurrency, which Facebook plans to introduce into circulation in 2020. This opinion was expressed by the chairman of the State Duma Committee on the Financial Market, Anatoly Aksakov, in an interview with the radio station Kommersant FM on Tuesday,” explained a news report from local media source TASS.

European regulators seem to be taking a more open-minded approach

Perhaps the most level-headed responses that have been issued to the launch of the Libra network have come out of the European continent.

“Unlike social media for which standards and regulations are being debated well after they have been adopted by billions of users, the terms of engagement for innovations such as Libra must be adopted in advance of any launch,” he said, adding in a separate interview that “it has to be safe, or it’s not going to happen.”

According to Reuters, France has also launched a G7 Task Force with the intent “to study how central banks ensure cryptocurrencies like Facebook’s Libra are governed by regulations ranging from money-laundering laws to consumer-protection rules,” although Bruno Le Maire, the country’s Finance Minister had some rather strong marks about the project.

“It is out of the question that Libra becomes a sovereign currency. It can’t and it must not happen,” he said. However, Le Maire added that he will continue to learn about the project until the first G7 meeting takes place.

These responses–no matter how reactionary–all point to one thing: something is happening. (Finally.)

“Libra] will end up paving the way, in terms of regulation, in a lot of regions where it still might be grey or unpaved as of yet,” explained Dorian Johannink, Co-Founder and Business Director of Sylo, to Finance Magnates.

“What will happen is this will force a number of the slow-moving or non-moving regulators to define policy, and it will be in conjunction with how Facebook is rolling that currency out…That will help to set the stage for other companies coming in.”

And even if the project is a flop–if nothing else, “Libra is a research project that will generate interesting data about using blockchains for payment,” Stollman added. “Its value will be in measuring the level of engagement Libra experiences for the public in different countries with different economic conditions.”