A transaction that involved the sending of 94,505 BTC (worth roughly $1 billion) to a Bitcoin wallet on Friday has been the center of much speculation over the last several days.

Some analysts have made connections between the transaction and the massive exodus of crypto from the PlusToken Ponzi scheme; other crypto community members have hypothesized that the transaction could be associated with the launch of Bakkt’s institutional trading platform.

Of course, there’s a pretty good chance that the transaction could be totally separate from both Bakkt and PlusToken. In any case, however, the recipient wallet of the massive transaction is now believed to be the richest address that isn’t linked to an exchange.

The association of the transaction with PlusToken largely has to do with the alleged origin of the funds.

Blockchain analytics firm TokenAnalyst pointed out on Twitter that roughly one-third of the BTC involved in the transaction “directly originates” from Huobi, a well-known Singapore-based cryptocurrency exchange.

Zooming in to the flow of money, we see that a third of the 94.5k @Bitcoin directly originates from @HuobiGlobal.

These funds are currently sitting at 37XuVSEpWW4trkfmvWzegTHQt7BdktSKUs and are unspent.

We’ll be keeping an eye on where these funds move to…👀 pic.twitter.com/rT5wIFPRu9

In August, an analysis by blockchain analytics firm Elementus showed that the majority of Ethereum transactions being sent from PlusToken were sent to Huobi.

“Almost 50% of all withdrawals were sent to Huobi, indicating an unusually strong bias toward the Chinese exchange,” the report read. 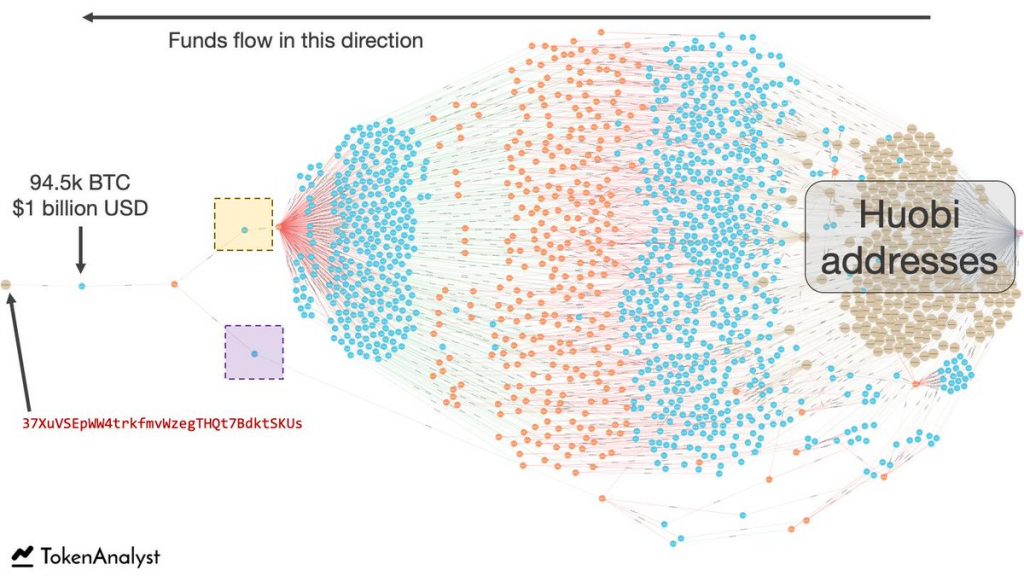 A spokesperson from Huobi said that “our team is looking into the validity of the claim” that the funds from the September 6th transaction originated from the exchange.

Could the transaction be a deposit onto the Bakkt platform?

Reports of speculation that the transaction could be somehow connected to the launch of the upcoming Bakkt exchange appears to have originated in a thread of comments on a Twitter post made by @Whale_Alert, a Twitter account, and website that reports unusually large transactions being sent over the Bitcoin blockchain.

Another user, @MusaShamaev, replied with the words “Deposit for BAKKT wallet.” Several other users chimed in with agreeing sentiments.

Bakkt Warehouse, a qualified custodian for Bakkt’s trading platform, began accepting customer deposits and withdrawals in BTC on Friday, the same day that the massive transaction was made.

At the launch of the custodial service, Bloomberg reported that would be the first platform to offer physically-delivered Bitcoin futures; in other words, Bakkt clients will be able to receive payment in Bitcoin once the futures contract expires.

Bakkt has not made any public comments as to the validity of the speculation around the large transaction; Finance Magnates reached out to Bakkt, but the exchange did not reply at press time.

Whoever sent the transaction paid way too much in fees