This past week the SFO carried out two search warrants in Hertfordshire (south-east England). It is also asking anyone who has invested in either Global Forestry Investments or Global Forex Investments to complete a questionnaire on the SFO website.

The two companies are led by the same two business partners, Andrew Skeene and Omari Bowers. They are based in the UK but promoted the investments worldwide. The two registered the company GFI Consultants Ltd. on April 13, 2010 and had offices in London, Brazil and Dubai.

Two weeks after registering their company in 2010, the two put out an invitation on their website “cordially” inviting potential clients to an “open evening for a night of champagne and canapés.” There, the duo promised that investors would get a “better insight” into the company’s “phenomenal Teak projects in Brazil.” A project so lucrative it was yielding their existing clients “10-20% per annum.” 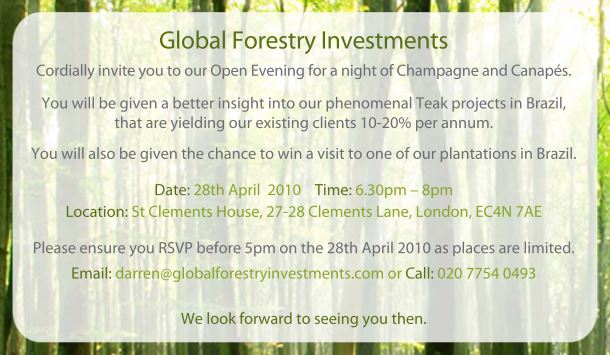 According to their well-designed brochure, their Global Forestry Investments Belem Sky Plantation, in the Para province of Brazil, was aimed at providing “providing long-term growth through investing in Brazilian sustainable forestry.” Investors, they promised, would be given the opportunity to “participate in an ethical and financially rewarding investment.”

It went on to explain: “Investors simply lease a plot on the timber plantation. The value of the investment and the return it will derive is based on the Teak trees growing on it. Specialist timber management companies lease the plots from the investors and manage the land.”

The minimum investment was £5,000 ($7,720) and there was no upper limit. Rental fees, according to the brochure, were £500 per 0.1 hectare plot per annum “dependent upon the timber management company chosen by the investor.” This would apparently be equivalent to 10% return, with additional percentages every three-to-five years.

In small print at the end of the brochure, GFI notes:

“GFI Consultants Ltd is not regulated by the FSA and is not authorised to offer advice to the general public concerning regulated or unregulated investment. This is not an authorised investment for the purpose of the UK FSMA (2000) and as such buyers have no access to statutory or regulatory protections including the Financial Ombudsman Service and the Financial Services Compensation Scheme.”

Meanwhile, a third company, Emerald Knights, sold the plots of the Belem Sky Plantation to retail investors. And, while Global Forestry Investments was not regulated by the FSA, Emerald Knights did promise investors that Citadel Trustees, which was FSA regulated.

Callen’s company, Alisons Legal Practice, is preparing to issue proceedings in the High Court against all three companies. His company has already recovered more than £2.5 million ($3.9 million) through the High Court for investors of Global Forex.

Many frustrated investors soon began noticing payments had stopped from the investment. In 2013, GFI issued a newsletter explaining away the payment delays as “a cumulate of various factors.” They attributed it to the management companies experiencing “an unusually long rainy season followed by logistical and banking issues caused by a regulation in Brazil.” Of course, the company reassured investors that the payments were imminent.

In January 2014, in another newsletter, GFI went even further and said that “administrational complications” that “played a part in causing the delays” had been rectified.

Share this article
Tags: regulation / Scam
Got a news tip? Let Us Know

My partner and I invested 90 k in their GFXi forex trading ran by Andrew Skeene and Omari Bowers this would have been our pensions as I don’t have a pension. However, when we were told to withdraw our funds, we submitted our forms and no money was forthcoming 3 1/2 yrs later we have only received back around 2% of what we should have been paid we have not even had any where near our capital back. We have fought tooth and nail to get our funds back, there were lots of excuses, we were told problems with Dubai… Read more »