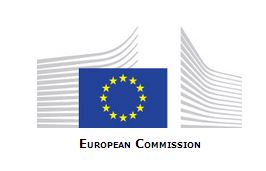 In response to policing institutions in its jurisdiction within the European Economic Area (EEA), The European Commission has fined 8 international financial institutions a total of € 1,712,468,000 for participating in illegal cartels in markets for financial derivatives, according to an official press release today announced on the European Commission website, and as part of ongoing investigations that have reached  a settlement.

The Eight Institutions Referenced Include (in no particular order):

Four of these institutions participated in a cartel relating to interest rate derivatives denominated in the euro currency, as per the press release. Six of them participated in one or more bilateral cartels relating to interest rate derivatives denominated in Japanese yen, and such collusion between competitors, in both cases, is prohibited by Article 101 of the Treaty on the Functioning of the European Union (TFEU) and Article 53 of the EEA Agreement, according to the announcement concerning the massive penalties.

The announcement further details that both decisions were adopted under the Commission’s cartel settlement procedure and the companies’ fines were reduced by 10% for agreeing to settle (See also MEMO/13/1090, from the European Commission).

Commenting in the official press release, Joaquín Almunia, the Commission’s Vice-President in charge of competition policy, said, “What is shocking about the LIBOR and EURIBOR scandals is not only the manipulation of benchmarks, which is being tackled by financial regulators worldwide, but also the collusion between banks who are supposed to be competing with each other. Today’s decision sends a clear message that the Commission is determined to fight and sanction these cartels in the financial sector. Healthy competition and transparency are crucial for financial markets to work properly, at the service of the real economy rather than the interests of a few.”

Interest rate derivatives, which include forward rate agreements, swaps, futures, options and other such instruments are financial products that are used by banks or companies for managing the risk of interest rate fluctuations and play a key role in the global economy, the European Union announcement explained today.

Benchmarks such as the EURIBOR or LIBOR reflect an average of the quotes submitted daily by a number of banks which are members of a panel (panel banks). These benchmarks are meant to reflect the cost of inter bank lending in a given currency, and serve as a basis for various financial derivatives.

As investment banks compete with each other in the trading of these derivatives, the levels of these benchmark rates may affect either the cash flows that a bank receives from a counter party, or the cash flow it needs to pay to the counter party under interest rate derivatives contracts. However, the potential conflict of interest exists as parties to the trade can collude to their benefit, via submitted daily fixing rates or other means resulting in unfair market participation or rate manipulation (whether be price rates or interest rates).

These products derive their value from the level of a benchmark interest rate, such as the London inter bank offered rate (LIBOR) – which is used for various currencies including the Japanese yen (JPY) – or the Euro Inter bank Offered Rate (EURIBOR), for the euro.

The EIRD cartel operated between September 2005 and May 2008. The settling parties are Barclays, Deutsche Bank, RBS and Société Générale. The cartel aimed at distorting the normal course of pricing components for these derivatives. Traders of different banks discussed their bank’s submissions for the calculation of the EURIBOR, as well as their trading and pricing strategies.

In the context of the same investigation, proceedings were opened against Crédit Agricole, HSBC and JPMorgan, and the investigation will continue under the standard (non-settlement) cartel procedure.

In the context of the same investigation, the Commission has also opened proceedings against the cash broker ICAP. This investigation continues under the standard (non-settlement) cartel procedure.

In setting the level of fines, the Commission took into account the banks’ value of sales for the products concerned within the EEA, the very serious nature of the infringements, their geographic scope and respective duration. 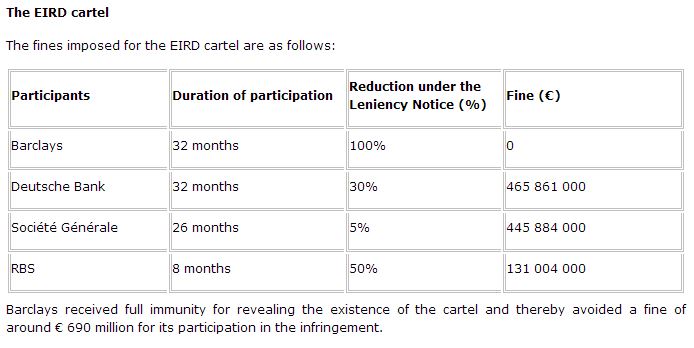 As shown above, Barclays received full immunity for revealing the existence of the cartel and thereby avoided a fine of around € 690 million for its participation in the infringement.

UBS, RBS, Deutsche Bank, JPMorgan, Citigroup and RP Martin were involved in one or several of the infringements of EU competition rules.

The fines imposed for the YIRD cartels can be seen in the excerpt below from the press release: 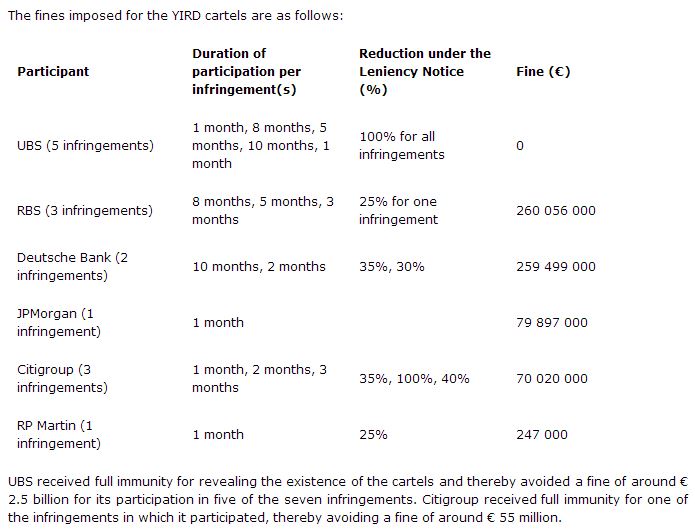 As shown in the bottom of the above excerpt, UBS received full immunity for revealing the existence of the cartels, and thereby avoided a fine of around € 2.5 billion for its participation in five of the seven infringements. Clearly, an effective cost-saving strategy  as part of its cooperation on its own infringements in the investigation and that of others, thanks to the benefits afforded on the current legislations.

This immunity is like a hybrid cross between whistle-blowers blowing the whistle on themselves and plea-bargaining in response to a lessened degree of reprimanding, or in this case full immunity. On a lesser note, monetarily speaking, Citigroup received full immunity for one of the infringements in which it participated, thereby avoiding a fine of around € 55 million.

As the purpose of derivatives are used to transfer risk (between hedgers and speculators) and traded on financial markets, they serve as an insurance mechanism against price movements and reduce the volatility of companies’ cash flows, which in turn results in more reliable forecasting, lower capital requirements, and higher capital productivity.

In recent years, derivatives have developed into a main pillar of the international financial system and are an indispensable tool for risk management and investment purposes, yet their complexity has risen quite dramatically since then.

The EURIBOR, JPY LIBOR and Euroyen TIBOR are benchmark interest rates intended to reflect the cost of inter bank lending in euros or Japanese yen respectively. These benchmarks are widely used in the international money markets and they are based on the relevant panel banks’ individual quotes submitted daily to the relevant calculation agent.

On 18 September, 2013, the Commission proposed a Regulation on indices used as benchmarks in financial instruments and financial contracts such as LIBOR or EURIBOR. See IP/13/841. The planned measures aim at helping restore confidence in the integrity of benchmarks following the LIBOR and EURIBOR scandals.

New Anti-Cartel Enforcement, a First in the Financial Sector

Under a cartel settlement, companies that have participated in a cartel acknowledge their participation in the infringement and their liability for it. The cartel settlement procedure is based on the Antitrust Regulation 1/2003 and allows the Commission to apply a simplified procedure and thereby reduce the length of the investigation. This is good for consumers and for taxpayers as it reduces costs; good for antitrust enforcement as it frees up resources to tackle other suspected cases; and good for the companies themselves that benefit from quicker decisions and a 10% reduction in fines.

In a previous statement following the Competitiveness Council of 2 December, 2013, Joaquín Almunia,Vice-President of the European Commission, stated the following with regards to upcoming finalization of related legislative drafts:

“I welcome the adoption by the Council of a general approach on the proposal for a Directive on Antitrust Damages Actions. This is a crucial step in the process. I now look forward to the European Parliament concluding its work in committees in January, so that the two legislative institutions can agree on the final text by the end of the legislature. The timely adoption of this legislative proposal is essential so that victims of infringements of the EU antitrust rules can obtain redress for the harm they suffered. The obstacles to effective compensation that they face today must be removed.”

As related rigging probes into alleged Forex Exchange market manipulations are underway across the globe, whether such anti-cartel enforcement will become part of any resulting charges or convictions, as it pertains to findings such as that of online group chats, ironically named “cartels”, is yet to be determined as that global case is still underway.

why do only the regulators/powers get a peace of this pie, you know how many smaller investors lost money do to this rigging , wearies the little guys settlement. and you think this will stop, hah, this is a payoff to the regulator and their powers to ease the sheeple and keep they’re rigging intact