In a statement on its website, FINMA noted that it’s working in close collaboration with foreign regulators as multiple banks from several countries may be implicated, and thus is widening the scope of this development across borders. There are currently 353 banks that are licensed by FINMA also as Securities Dealers, another 319 as co-operative banks (Raiffeisen Banks), and an additional 98 authorized representative offices of foreign banks.

The full scope and depth of this development is unclear for the time being. FINMA stated it would not provide any further details at the moment regarding the investigation, or of banks potentially involved.

Speaking to Forex Magnates about this development, sources in the Swiss FX services provider Dukascopy Bank, made clear that their institution had nothing to do with such an investigation. Additionally, in a comment to the media, Marc Buerki, CEO of another large and well- known provider of FX services, Swissquote, said that his bank was not part of the investigation.

Who Can Manipulate FX Markets?

It is yet unclear whether this development is connected directly to a larger story stemming from August when data was released concerning the rigging of FX prices in June, or whether this is just an isolated coincidence or indication of a larger developing trend including benchmark manipulation.

However, as major financial markets have been under extra scrutiny following the Libor manipulation cases and FX rigging stories from June, market regulators have been on the supervisory lookout even more. 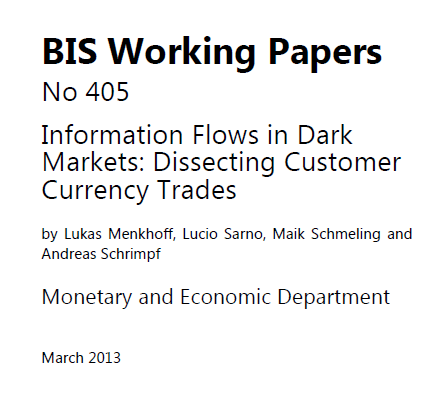 A Working Paper by the Bank for International Settlements (BIS) on Dissecting Customer Currency Trades, concluded that, “Observing customer order flows in a dark market is highly valuable from the dealer’s perspective […] our findings suggest that the FX market is populated by quite heterogeneous market participants and that we gain valuable economic insights from observing their transactions and learning about their different predictive ability, trading motives, trading styles and risk exposures.”

The BIS paper also concluded,“Dealers have a strong incentive to gain large market shares (besides other reasons such as economies of scale in the provision of trading infrastructure, for example) and to set up trading in a way that reveals end-users’ identities. These findings about strong information asymmetries and incentives should be useful to inform policy discussions on the appropriate framework for OTC markets.”

Therefore, large banks that have significant share of FX market volumes may benefit from the ability to gain insight from their customers’ order-flow, which may inherently contain predictive price drivers. Moreover, since there are many sources where prices originate, some sources may be lagging the true markets’ mid-point, whereas other sources may be leading at any given time. This difference in prices could allow for arbitrary rate manipulation when shifted in the favor of one party to the transaction, without regards to the other party in the trade.

Collective Goal: Fair Dealing for Everyone

Fair prices have been one of the main issues driving the continued development of ethical order routing and market-making technologies, where execution would be the closest to that of the highest level of commercial honor (which itself is a relative standard –as rules change and technologies improve). At the end, everyone wants fair treatment, although the unscrupulous few wreak havoc from time to time (sometimes with or without anyone noticing).

Whether this news from FINMA leads to any findings of manipulations and to what degree if any rates were manipulated will be interesting to see, since given the size of market, even central banks have a hard time influencing rates in their favor (as in the the case of intervention).

In a statement to the media earlier this year with regards to the June FX rigging story, Andy Naranjo, a finance professor specializing in FX Markets at the University of Florida in Gainesville said, “I’m skeptical of the ability of traders to manipulate the major currencies in a meaningful way given the massive size of this market.” Mr. Naranjo added, “Governments themselves often have a difficult time moving foreign-exchange markets through their interventions, yet they have the additional ability to create fiat money and alter both monetary and fiscal policies.”

Given the enormous volumes traded daily, which are based on the latest BIS report, account to $5.3 trillion per day on average, even the smallest price advantage on a large trade can have significant value. On the contrary, a relatively small price advantage over a large number of trades can have an equal cumulative value. Therefore, it may not take much to move the market a small degree sufficient to benefit one party at the expense of another (hence the unfairness aspect of market manipulation).