I know you’ve been expecting it so here it is: The largest and most up-to-date report detailing the average trading volumes by retail Forex brokers. The report shows that all prior estimates were far from the actual figures. Retail forex volume doubled itself in less than two years and the total average daily volume is well above $100B.

Largest retail Forex broker, as you probably already know, is FXCM with Oanda coming in at a distant second place. It looks like FXCM’s world Forex domination is all but complete and all that is left for others is the competition for 2nd and 3rd places. Good luck Oanda, Gain, Saxo and GFT.

The numbers as were officially, and to some extent unofficially, released by the brokers themselves: 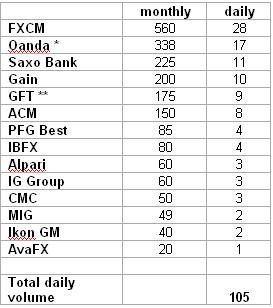 The figures are incomplete as some brokers such as FXDD, FX Solutions and CMS simply don’t report or disclose their numbers.

It is my estimate that the non-reporting, non-disclosing brokers are able to contribute at least 20-30B more to the daily traded volume, meaning that the total reported and estimated volume is in the range of $130-140 billion dollars a day.

A year ago I was sure retail Forex growth was about to slow down, guess I was wrong. Who wonders if $140B is the limit?

Hi Michael, Great site and excellent post. Its about time someone did something like this . A couple of comments and questions about this post: I am a little confused about CMC. You mention that they don’t disclose their volume and yet you have them listed as doing 50 yards a month. Is this an estimate? Also I noticed your numbers don’t quite add up. You are adding the rounded estimates. If you add the monthly figures, you get 2092bn monthly. Divide that out by 22 trading days and you get 95bn a day. About 10% less than your figure.… Read more »

It’s nice to know the latest reports on this kind of business.In order to know the results and series of updates.

It is not just a bag that you carry but it reflects your personality, your choice and of course, your style also

There are some others that I don’t remember but those are most of them. You can get a bone in your inventory and tame the wolves so they can be your pet dogs. Then you can make them love you by hitting them with stick from your inventory.

Human Resource Management is the understanding and application of the policy and procedures that directly affect the people working within the project team and working group. These policies include recruitment, retention, reward, personal development, training and career development.

Ethernet networks are shared and switched based on bandwidth and cost requirements. Gigabit Ethernet can be switched, routed and shared.. All of today’s internetworking technologies, as well as such technologies such as IP-specific switching and Layer 3 switching, are fully compatible with Gigabit Ethernet, Just as they are with Ethernet and Fast Ethernet.