Spreads have always been one of the most important things forex traders are looking at when selecting their forex broker. While this is indeed an important aspect of forex trading often enough the importance of spreads is overrated as there are many more things one need to consider before selecting a forex broker and I don’t consider spreads as being even in the top 5 of the most important features. Stability, regulation, execution, customer service and being a broker that isn’t infamous for not returning money comes to mind much before that. In my opinion, most retail clients shouldn’t care one bit about spreads because they almost don’t matter to them and those who do need to look at spreads (highfrequency traders for instance) already know where to go.

However, I can’t ignore the percepted importance of spreads and all forex brokers use this feature in order to promote their business. Just look at forex banners on all sites.

This recently gave stimulus to the rise of forex spreads comparison sites which by one method or another display spreads from various brokers and give traders a full picture of what’s going on before making a deposit.

I covered the first ever such website called FX Intelligence here. I wrote back than that “This is an important tool that finally takes the broker review sites to the next level: instead of reading biased and non-biased reviews traders are able to track broker performance real time. Hopefully the platform is connected to live accounts and not demo ones otherwise the tool won’t be 100% accurate as some brokers tend to display different spreads at their demo and live accounts.”

In my opinion, these sites are widgets with sites and not sites with widgets – so I can’t really see a real business model developing here. It’s also hard for Google to index these sites as they got little or no content at all and once big sites like fxstreet (hint hint Francesc) or forexfactory develop such a widget themselves (it costs almost nothing to do so) these independent sites will simply vanish.

Another issue is that it’s really hard to actually verify whether these sites show actual results and whether displayed are live and not demo feeds.

Ever since FX intelligence was launched, to no surprise similar websites started sprouting (apologies for the screenshots quality, I’m working on that).

mt4spreads is another very useful spreads comparison site. It shows the spreads divided into majors, euro pairs, dollar pairs, gbp pairs and so on. You can filter by currency pair, time frame or by session. I didn’t really manage to fully understand whether it shows the average spread or minimum spread during the time session as the login process seems to be a bit buggy at this point. 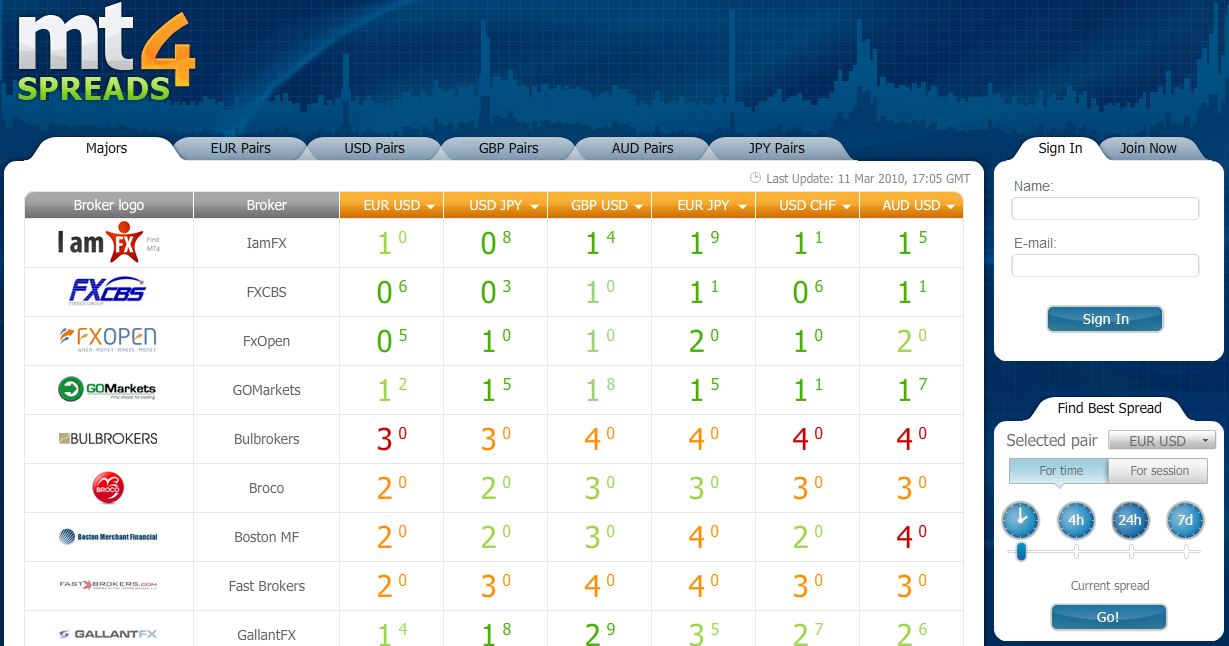 But you can click any spread by any broker to see more detailed data – which is actually more confusing than helpful in my view.

While FX Intelligence and mt4spreads got that up-to-date flashy design, mt4i.com/spread seems somewhat outdated. Moreover, according to its own statement it shows only demo spreads – and this is simply worthless. MT4i.com however has additional services and this spreads comparison isn’t the focus of its site, rather it is regarded the way it should be – another nice gadget. 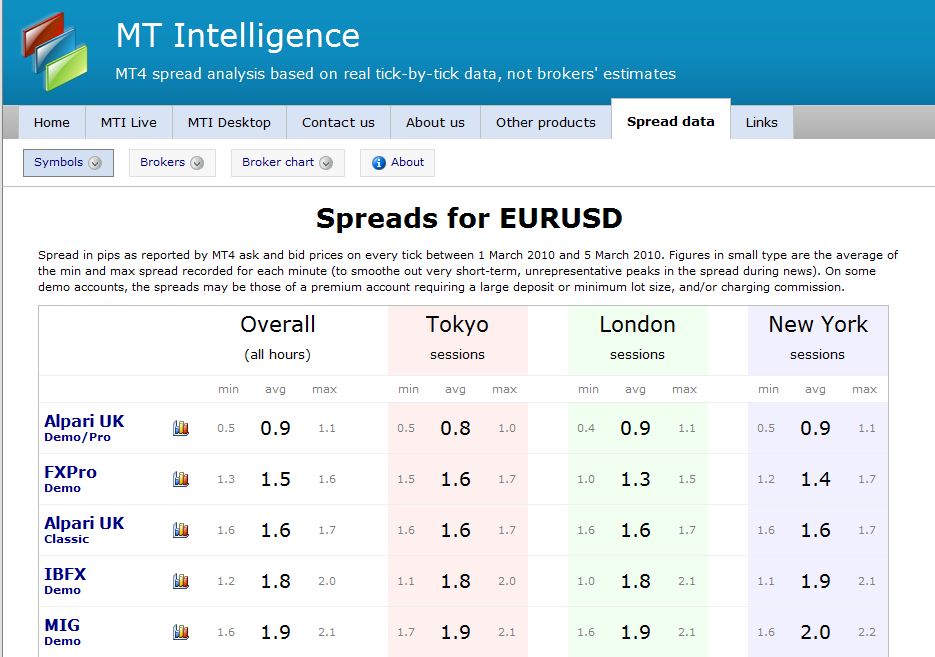 Coincidentally just as I was about to seal this post another comparison tool popped up! This time it was mataf.net’s Arnaud with his own version of broker spreads comparison. Unlike the sites above mataf.net is beefed up with content therefore this tool should be more popular. At this point it isn’t perfect as it displays only a couple of brokers and still requires more work before becoming a visually useful tool however I must recommend its spreads comparison methodology: unlike all others Arnaud doesn’t trust the broker feeds or APIs and derives the data from the charts themselves using Optical Character Recognition which takes screenshots of charts and compares them every few seconds. Sounds complicated? you bet! but this also makes it most accurate. 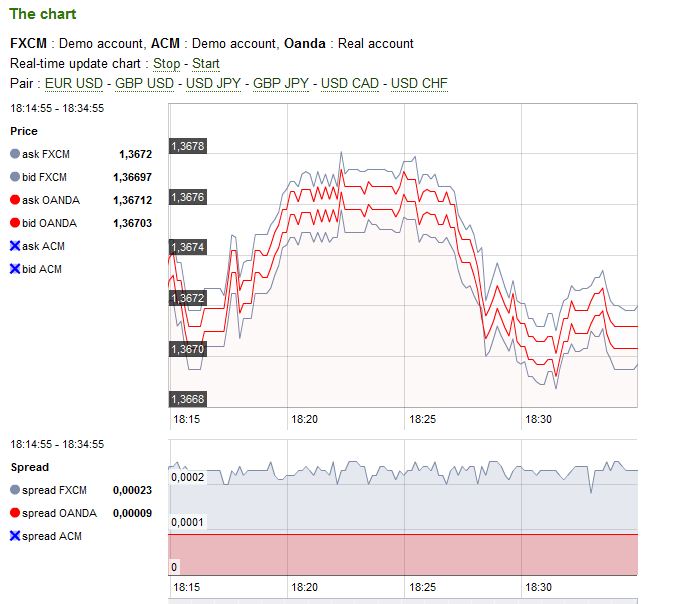 You must understand that the spreads is not what you should look at. It is the brokers dealing desk and how aggressive they are.

Anyone that offers you additional 10 or 15 or 20 % bonus are brokers that you need to stay clear of. They offer such a deal because they know that they will get their money back and more…

And I want to see if I can find a trading tool by comparing the medium price between brokers. I think we can make money with a such information

The important aspect of the spread is not the listed spread, it is the actual spread you get when you make the trade. I don’t see how you could get this information from these sites. You are probably better off talking to people about how honest the broker is when you trade live. I’ve rather have an honest, reliable broker, than one which is engaged in a spread war with other brokers.

I agree that spreads on most brokers web sites, micro sites are widgets are a marketing tool that fools many. Execution is paramount 1) a spread you can actually trade on, 2) the speed and slippage around that execution (if the bid is 50, hitting the 50 bid is great, getting filled at a 46 bid is not) and, 3) the reliability that you will get the same consistent spreads all of the time, whatever the market conditions. If you trade via a meta broker expect NOT to get any of these 3 items if you trade in volume or… Read more »

“those who do need to look at spreads (highfrequency traders for instance) already know where to go.” My bank’s wire clerk would beg to differ.. While I’m glad to help all of the FX community, as someone who pays a small fortune per month in spread-related costs, I built FXIntel to especially help traders like me (and based upon the feedback received, it certainly has). I’ve traded with nearly every major broker/ECN over the years, and while they all have their ups & downs, spreads quickly become a key differentiating factor. I completely agree with the previous commenters, overall trade… Read more »

What about commissions? Many brokers/ECNs charge commissions as well as a spread – making the actual spread a lot higher than what is listed.

Best Execution is the key factor, which includes spreads, fees/commissions (if any), slippage, requotes and rejected orders.

Also many spreads widen depending on the amount you’re trying to trade. You need to know if you’re receiving laddered pricing or if everyone receives the same price independent of the order size.

@Arnaud: MT4 Spreads is something you can use, as you can go back in time and see what the spread was during news. @TradingDiary: Unlike all other sites, MT4 Spreads has (if you have read the subpages) LIVE accounts on all the listed brokers (hidden ofcourse). I don’t like to show demo spreads as indeed what you said, they are or can be different then the actual spreads on the live data feeds. Trust me, I’ve had arguements with a couple of brokers because they don’t want to be listed, but I still do. Power to the traders! 🙂 @Michael:… Read more »