Gain just released its Q3 2011 results which show a solid increase in revenues and improvement in net income. Retail volume was almost unchanged from Q2 2011.

Gain’s institutional GTX platform is experiencing high growth and its volumes were $260 billion in Q3 – a little more than third of all Gain’s volume.

(*See below for reconciliation of non-GAAP financial measures)

“Third quarter year-on-year revenue growth reflected strong performance in our established markets as well as the continued acceleration of our international expansion. Our strong net revenue and EBITDA performance also demonstrate GAIN’s ability to effectively manage the business during periods of significant market volatility, as we experienced in the third quarter, and our solid EBITDA margin of 28.8% underscores the operating leverage inherent in our business model,” commented Glenn Stevens, Chief Executive Officer.

“In the third quarter, we continued to successfully grow both our retail and institutional businesses, which posted significant year-on-year and sequential volume increases. In particular, our institutional platform, GAIN GTX, showed strong growth, with volume increasing to $260.0 billion, accounting for 36.7% of third quarter trading volume, compared to 12.2% in the third quarter of 2010. Our core retail operating metrics also progressed year-on-year, demonstrating the competitive strengths of our technology, products and service offerings, as well as the net benefit of the dbFX business we acquired from Deutsche Bank AG earlier this year,” Mr. Stevens continued.

“We are continuously evaluating ways to optimize the allocation of our capital. The initiation of a quarterly dividend and stock repurchase program, while also maintaining a strong cash position and a $50.0 million revolving credit facility, demonstrates our ability to return value to shareholders without compromising the Company’s ability to actively pursue M&A and other strategic opportunities,” Mr. Stevens concluded. 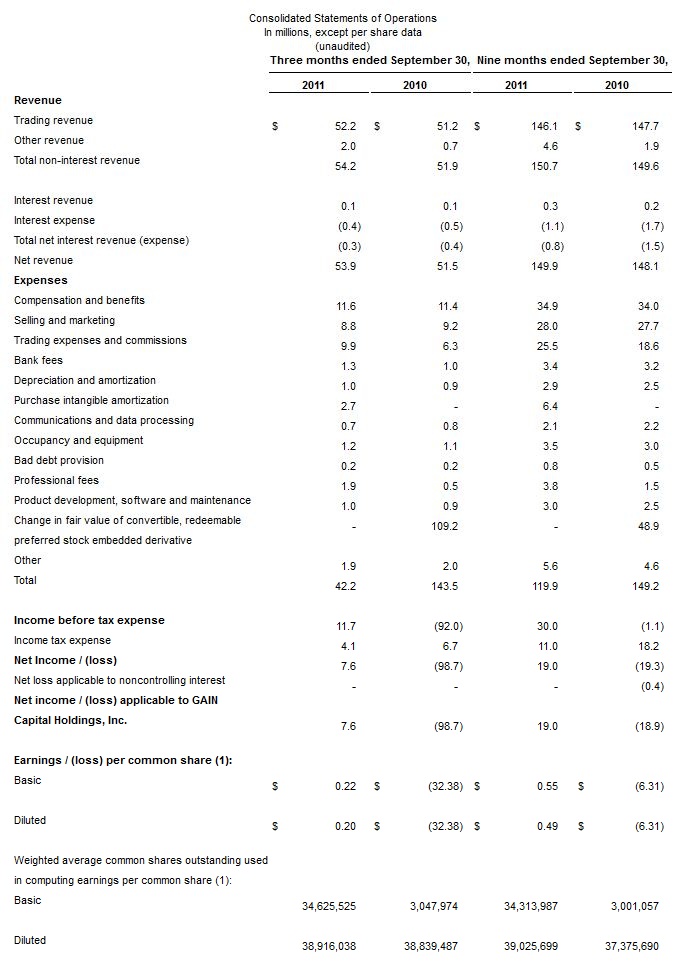 Forex Magnates tracks volumes and income of all major forex brokers as can be found in the quarterly report.