The crippling downfall of the Turkish lira over the last three months, which saw the currency plunge 16%, has directly impacted trading activity amongst Turkey’s thriving FX broking sector. Market participants reported that investors were intrigued with the volatility, not seen since the banking issues of 2002. The recent uptake in volumes highlights the role market conditions play when traders search for opportunities.

Turkish brokers operating in the margin FX arena saw a surge in activity in Turkish crosses during the month of January after a roller coaster ride saw the currency drop to its lowest level in the last ten years. Anil Abbak, Head of FX at Tacirler Securities (FXTCR), commented to Forex Magnates about the firm’s volumes: “FXTCR’s trading volume has increased more than 50% on TRL currencies based upon the harsh move of the lira.”

Similar shock waves were felt at Danish giant, Saxo Bank, CEO of the firm’s Saxo capital Markets division, Torben Kaaber, explained to Forex Magnates how the firm was on the receiving end of increased flows in its emerging market currencies (EMFX) division; he stated: “Our Saxo Capital Markets business saw very strong growth in January, with average daily trading volumes significantly higher than in December. The highest volume turnover was seen on January 29 when our daily average traded volume was 172% higher than the average daily traded volume for the whole month. Turmoil in emerging markets, including Turkey and India, provided trading opportunities for some of the less liquid currency pairs. For example, USDTRY activity was at its highest on January 27, namely 874% of the average volume traded for the currency pair in January.”

Cuneyt Akdemir, Manager of International Capital Markets at IS Investment, explained how the bank’s brokerage unit did not experience an influx in trading activity but saw a dramatic shift in the instruments traded by its clients: “In January 2014, our volumes are close to 30 billion TRY ($13.6 billion) just slightly higher than our volumes in December 2013. So, volume-wise, we have not experienced a huge uptick in volumes but we have seen a change of composition in the range of currencies that our clients trade in. During the month of January alone, trading activity on Turkish lira pairs almost doubled to 20% of the total monthly volumes.”

During the volatile period, IS Investment saw a sharp rise across less liquid currencies, as mentioned by Mr. Akdemir: “Local clients who are well aware of the dynamics of the Turkish lira, increased their trading activity in the lira crosses as well as the other EM currencies like Russian ruble and South African rand on Trademaster FX, its broking unit.”

The Turkish lira, like many EMFX pairs, has been coming up the ranks in relation to volumetric data, according to the recent BIS Triennial Survey 2013, the Turkish lira was the 16th most actively traded currency with 1.3% of total market share, a 45% jump from figures reported three years earlier.

Volumes are up across the board, however EMFX crosses have suffered a backlash from the recent tapering issue. With US quantitative easing slowly filtering out, emerging market economies have wakened significantly with the rupee, lira and rand faltering the most.

“After the long-awaited tapering decision taken by the Federal Reserve, as an expected initial reaction, there has been an increase in daily volatility on EMFX. With the developments in internal politics as well as changing macro environment, some EM currencies are hit harder than the rest which were initially named as the ‘Fragile Five’. As Turkey being categorized under the Fragile Five, daily trading band on the Turkish lira exceeded levels that we have not seen for a long time,” added Mr. Akdemir. 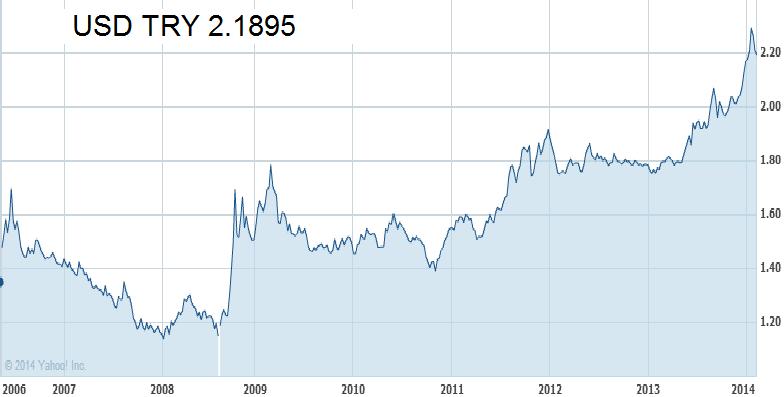 During December, the current Turkish government’s public image further declined after a major scandal was unfolded, which resulted in several notable ministers resigning. The lira’s gradual decline during Dec-Jan was further ignited after the government tried to intervene in a bid to save the currency. On January 28, the Central Bank took measures whereby it doubled its borrowing rate from 3.5 percent to 8 percent, and raised the lending rate from 7.75 percent to 12 percent.

Turkey’s thriving margin trading environment has gradually been establishing itself as a regional centre point for FX trading. The market has been active since the mid 90’s, however during the last decade (2004 onward), Turkey saw a surge in investors entering the FX markets through the rise in the internet and the public’s growing disposable income. Turkish investors have traditionally invested in bonds, and traditional financial markets products such as equities have not been high on investors’ list, domestic investors make up around 30% of equity volumes.

Istanbul, home to the country’s infamous Grand Bazaar (traditional shopping complex), is the epicentre for the city’s off-exchange gold and FX trading. Turkish investors were trading through local brokerage firms and through services offered through IBs. Pre-regulation, local brokers included firms such as; Elibol FX, Baltay Capital, Grand Forex, Sedar Forex and Ulukartal. UK-based ODL Securities and Swiss- based MIG Bank were two of the most prominent global providers, ODL later acquired a domestic broker before it was acquired by FXCM.

Turkey’s main financial watchdog, Capital Markets Board, embraced FX as a regulated asset class in 2011. Since its inclusion, the asset class has seen over 20 brokers offering execution-only services. Forex Magnates’ forthcoming Turkey FX conference will explore how the market has evolved over the last three years.

Apart from a change in interest rates, the government has exercised its might by purchasing Turkish bonds as it attempts to stabilize the market.

“We are expecting the volatility of the lira to proceed settling down in the forthcoming days. For FXTCR, as being an STP broker, the volatility and earnings of our clients made the week for us,” concluded Mr Abbak.

Despite the burning-bush affecting the Turkish economy, Mr. Akdemir is optimistic on the FX trading landscape, he opined: “Looking towards 2014, the Turkish FX market is geared to grow in size with the help of the new brokers that are being added to the system. Also, the planned FX event like the Turkey FX Conference in April by Forex Magnates will definitely increase the awareness of the leveraged FX market in Turkey as well as help to increase the knowledge of clients about the risk that are involved in OTC FX trading.“