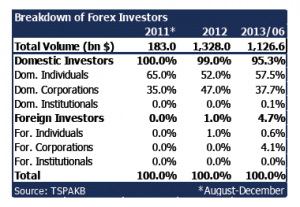 Retail FX trading volumes during the first-half of 2013 reached $1 trillion in Turkey, according to a semi-annual report published by The Association of Capital Market Intermediary Institutions of Turkey (TSPAKB), which covers Forex in addition to other leading financial market segments in the Eurasian economy.

The report noted that growth had been “remarkable”in Turkey, following the regulation of the FX industry in September 2011. This trend has continued into the first-half of 2013 where retail Forex trades represented twice the equity trading volume and three times the derivative trading volume during the period, and domestic retail investors dominated with 58% market share and 38% held by domestic corporations.

The large share of the domestic corporations was attributed to brokerage firms’ hedging operations with market makers, according to the report from TSPAKB for the first-half of 2013. 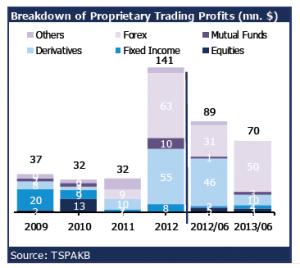 The report concluded that the number of staff across financial services sectors has been on the rise, as well as the amount of assets under management by both brokerages and asset managers. The number of branch offices from banks and brokerages was up to 72 in H1 2013 from 66 at the end of 2012, and largely attributed to the specialization in Forex by brokerage firms in the region.

As per the TSPAKB report, leveraged FX trading became the major source of proprietary trading revenues during the first-half of 2013 and totaled $50 mln during that time in company profits.

According to the latest Triennial survey of central banks conducted by the Bank for International Settlement (BIS) in April 2013, Turkey had Average Daily Volumes (ADV) in FX Markets totaling $27 bln and up from $17 bln in ADV in 2010 and representing a 58% increase over that period. The United States dollar versus the Turkish Lira or USD/TRY currency pair represented 1.2% of global volumes in April 2013, and ranked 13th most traded currency pair by market share with $63 bln in ADV for the Turkish currency relative to the US Dollar.

Forex Magnates’ latest Quarterly Industry Report (QIR) for the 3rd quarter of 2013 provides further insight into the opportunities and challenges in regions such as Turkey and other developing economies with high-growth prospects for FX.

Share this article
Tags: turkey
Got a news tip? Let Us Know

in my opinion Turkey and Poland are most interesting markets in whole Europe
stable and growing not only for Forex, but capital markers

did some one said Poland?