The amount of Bitcoin stored on exchanges is ‘continuously plummeting’, according to a new report from CoinTelegraph.

Indeed, since Crypto’s ‘Black Friday’ in March, when the price of Bitcoin swiftly fell from over $9,000 to nearly $4,000, data from Glassnode shows that the amount of Bitcoin that traders are storing in cryptocurrency exchange accounts has fallen to the tune of $2.85 billion (from 2,950,000 BTC to 2,700,000 BTC.) 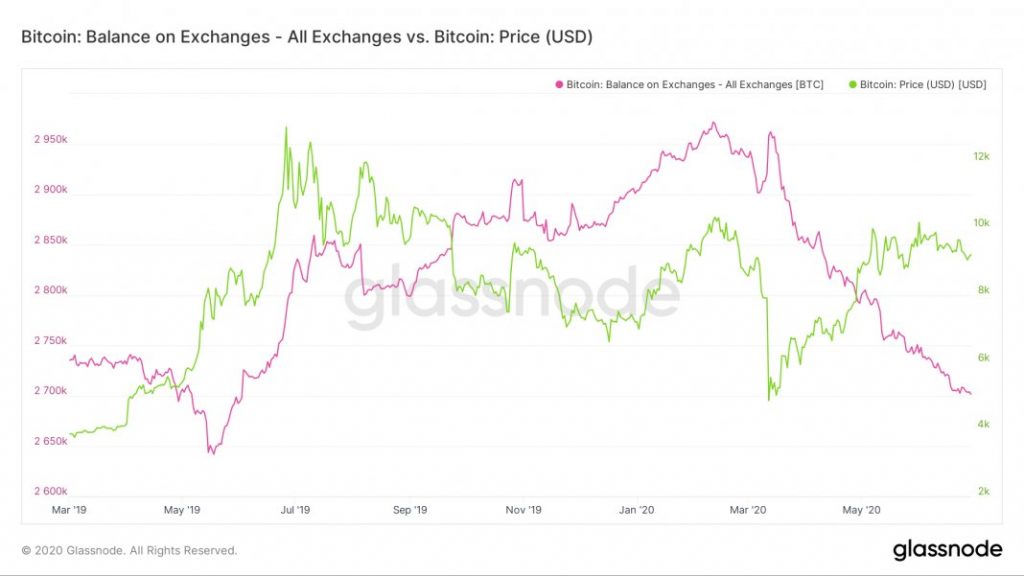 What is causing the decline? Analysts say that there are several factors at play: firstly, decreased trust in cryptocurrency exchanges, after all, this month has seen both the indictment of the four BitMEX co-founders as well as the arrest of OKEx founder Star Xu.

More importantly, the decrease in the amount of BTC on exchanges could be indicative of a decline in the number of BTC holders that are willing to sell their coins.

“Bitcoin Accumulation Has Been on a Constant Upwards Trend for Months.”

Crypto Twitter commentator @Oddgems also wrote on Saturday that “more and more #Bitcoin getting out from exchanges and most probably being transferred to non-custodial wallets. This suggests slightly lower liquidity and lower selling pressure going forward.”

More and more #Bitcoin getting out from exchanges and most probably being transferred to non-custodial wallets.

Auto1 FT Issues Blockchain Security Worth Over €4m with iVE.ONEGo to article >>

Additionally, at press time, Bitcoin’s “Fear and Greed” Index was tipped toward ‘greed’, which indicates that Bitcoin holders could be taking steps to sustain and build their reserves of BTC.

The news of BTC shortages on exchanges coincides with BTC hitting its least volatile point in months, according to data from crypto analytics firm Skew.

Who said bitcoin was volatile?

Historically speaking, periods of low volatility tend to precede substantial price movements. Earlier this year, David Waslen, co-founder and chief executive of HedgeTrade, told Finance Magnates that “generally speaking, a drawn-out period of low-volatility price consolidation will lead to a huge move on either side.”

“The longer the consolidation persists, the more violent the breakout or breakdown will end up being,” he explained.