Indeed, after the initial shock that the virus wrought on the global economy, the road to recovery has been somewhat steady, although looming doubts about the future are still on the horizon.

Still, in cryptocurrency markets, it can almost be argued that now that the most immediate economic crisis has passed, certain aspects of the cryptocurrency markets almost seem to have picked up where they left off–for example, the price of Bitcoin, which was holding steady around $9,000 before the virus hit, returned to levels around $9,000 in early May, and has maintained them ever since.

Indeed, “crypto, similar to many markets across the world, experienced an initial shock due to the coronavirus, leading to a severe market dip,” said Steve Ehrlich, chief executive of Voyager Digital to Finance Magnates–but “crypto markets were some of the fastest to recover, as Bitcoin re-gained its pre-pandemic price in a matter of weeks following the crash.”

As time goes on, and recovery continues, it seems that a similar argument can be made for parts of the cryptocurrency derivatives market–although “recovery” in the derivatives space isn’t as cut-and-dry as something like the price of Bitcoin.

Black Thursday’s redistribution of users may have stuck

Indeed, data from Bybt.com shows that as of last week, open interest on BTC futures contracts on exchanges other than BitMEX was either roughly equal to or higher than pre-corona levels.

Twitter user @DialecticCrypto noted that in fact, open interest on Binance Futures was twice as high as it was before the COVID-19 crash, and 50 percent higher on Singapore-based ByBit–suggesting that perhaps Binance Futures and ByBit may have absorbed the most users from BitMEX after a service outage famously occurred on BitMEX during peak trading hours on Black Thursday.

However, while BitMEX may have lost some of its users and market share to other futures exchanges in the market, the exchange seems to have undergone its own journey towards recovery. In spite of its losses, at press time, the exchange had regained its spot as the top platform in terms of BTC Futures open interest with $898.47 million in OI; Okex followed with $774.22 million, topping Huobi’s $496.85 million. 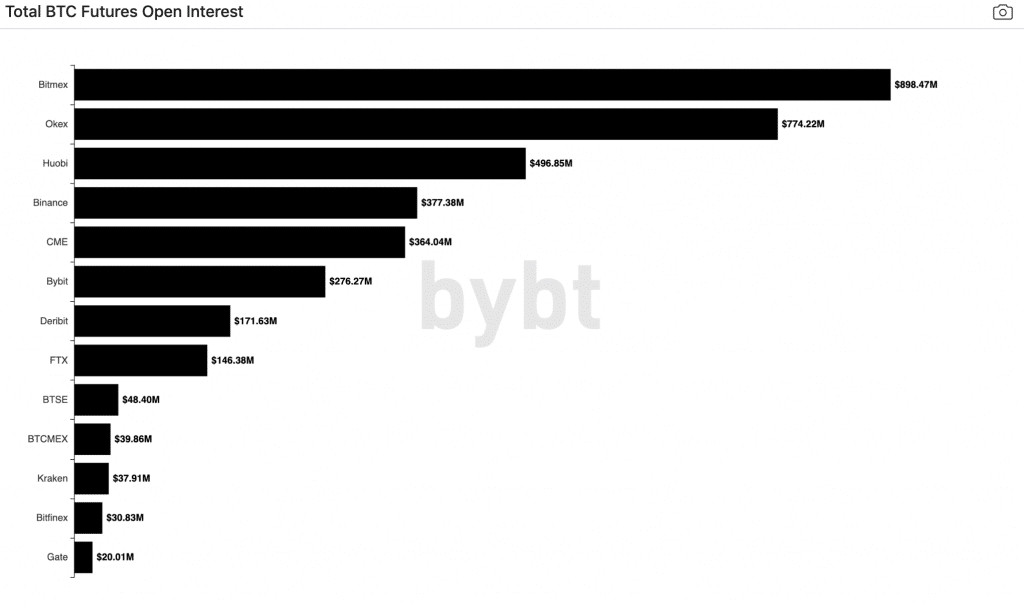 Of course, these charts don’t paint a complete picture of the futures markets: for example, BTC futures open interest on CME showed hit new record high levels in May; open interest on all of CME’s BTC open options showed consisten growth through the month of June, and have re-started to rise after a sharp drop across a number of exchanges at the end of the month. 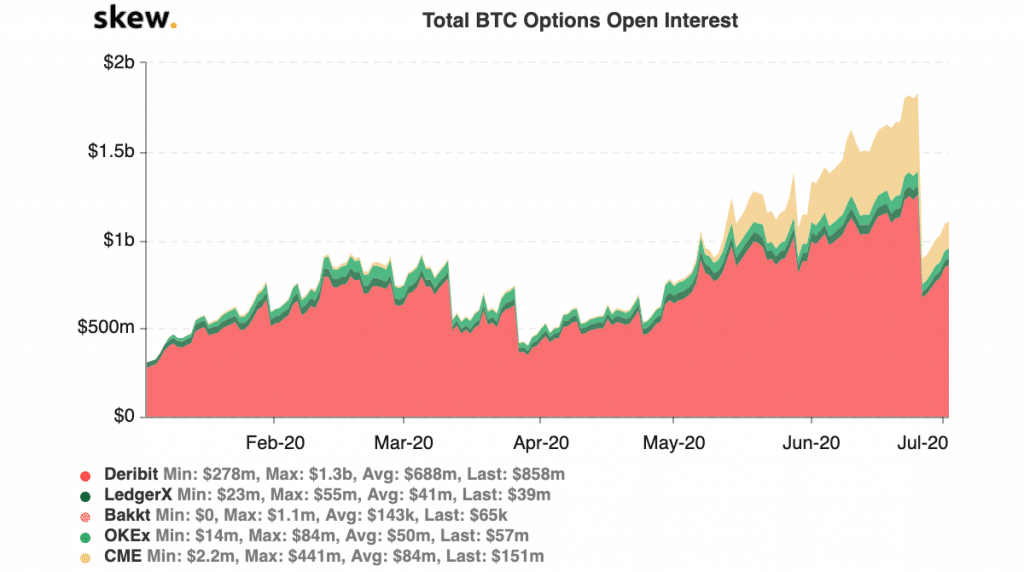 However, the data points to an important question: more than three months after crypto’s Black Thursday, how has the crypto derivatives market continued to shape and re-shape itself?

What happened on Black Thursday, and why was it so important for the crypto derivatives space?

The reason that Black Thursday holds particular significance for the derivatives side of the cryptocurrency space is due to infrastructural problems on exchanges–particularly, on BitMEX.

Indeed, during one of the most volatile moments on March 13th, BitMEX users experienced a sudden service outage that lasted for roughly 25 minutes.

While it was initially believed that the outage was due to technical issues with one of BitMEX’s cloud service providers, the exchange later said that the outages happened because of two subsequent distributed denial of service (DDoS) attacks.

“On 13 March during a peak moment of market volatility, the botnet overwhelmed the platform via a specially-crafted query to the Trollbox feature, prompting the database’s query optimiser to run an extremely inefficient query plan,” BitMEX’s post-mortem report of the attack reads.

Although the service outage was not necessarily an infrastructural failure on BitMEX’s behalf, but rather, an attack from a malicious third party, the damage to the exchange’s reputation seems to have remained–bolstered by another service outage in May, and a lawsuit the same month that accused BitMEX and its top officials of a number of crimes; the exchange has rejected the lawsuit’s claims.

Still, Bilal Hammoud, President, CEO, & co-founder of NDAX, one of Canada’s leading crypto exchanges, told Finance Magnates that as a result of the outage, “a lot of people lost confidence in BitMEX and the way they do things.”

“[…] I think traders are definitely wary and in the near future, people are going to be moving towards more regulated platforms,” Hammoud said.

BitMEX has been criticized for incorporating in Seychelles, a tiny island nation located in the Somali Sea segment of the Indian Ocean that has a reputation as an international tax (and regulation) haven; as the crypto industry has matured, an increasing number of exchanges have sought to establish themselves in the US, the UK, and other parts of the world with higher levels of tax and regulation.

“Subsequently, we have seen CME hit an all-time high in volume in the US and Binance has increased its volume,” Hammoud explained. “They’re taking a lot of that distribution away from BitMEX and I think it’s going to take BitMEX quite some time to regain trader confidence.”

Regarding redistribution of users on cryptocurrency derivatives exchanges, HDR Group, BitMEX’ parent company, told Finance Magnates that “both cryptocurrency and traditional markets saw substantial withdrawals in March as traders grappled with unprecedented market conditions. Bitcoin Futures Open Interest levels have now returned to more normal levels, with BitMEX currently leading the pack. We are never complacent though, and are focussing on continual product innovation and engine development in a fast growing, yet highly competitive market.”

“Currently, we see very little loyalty between the crypto community and derivative exchanges.”

Voyager’s Steve Ehrlich also predicts that a movement toward exchanges with higher levels of regulations will continue: as BitMEX and other crypto derivatives exchanges continue to face infrastructural issues and the occasional legal battle, “we have seen these exchanges gradually lose more and more volume over time,” he said, “and other derivative exchanges increase in volume after every outage and legal issue.”

Ehrlich also pointed out that at this stage in the game, these kinds of migrations are par for the course: “outages and legal action are not new,” he said. “This [kind of] migration has become commonplace in the crypto market, with investors jumping from one ship to the next, as concerns over safety, security, and solvency arise.”

Therefore, the key for crypto derivatives exchanges who want to build longer-lasting relationships with their users seems to be moving toward security and compliance: “as global regulations become more clear, we see the need for these derivatives exchanges to put policies into place to better protect their customers,” Ehrlich said. “Currently, we see very little loyalty between the crypto community and derivative exchanges.”

”There’s a lot of caution now” amongst crypto whales

And BitMEX has demonstrated that it is working to regain the trust of its users and to build its service offerings. For example, just last week, Finance Magnates reported that BitMEX will begin offering its users the option to hold corporate accounts, which will include enhanced security and customer service, as well as auditing and accounting features.

Additionally, BitMEX appears to have worked toward being as transparent as possible when it has come to service outages and other technical problems, posting live updates and offering comprehensive post-mortem reports after each incident has concluded.

Still, though, NDAX’s Bilal Hammoud has noted an air of wariness amongst derivatives traders: not just those that were or are users of BitMEX, but everyone in the space.

“I think there’s a lot of caution now,” he said. “We saw Bitcoin whales get hurt that day.”

Indeed, “I think a lot more people are cautious about derivatives and high leveraged positions that typically contribute to volatility,” he continued. “People now know that even the big whales are not safe because they were unable to activate their insurance and let the system work as intended.”

“It taught people some lessons and I think the trends are going to move towards more regulated derivatives.”

However, Hammoud believes that this cautionary attitude may not be entirely negative for the cryptosphere: “I think it’s in a way good for Bitcoin, because due to the low liquidity we saw for the past couple of months, Bitcoin has been very stable,” he said. “You’re not seeing those crazy dumps or pumps controlled by a few individuals.”

While walking with caution may be the way of the day, it’s quite possible that this cautionary attitude may be a temporary phenomenon–as time goes on, and traders regain trust in the markets and in the platforms that they use. This is partially evidenced by the fact that crypto derivatives OI as a whole is nearing what it was before the COVID-19 economic crisis.

Until then, periods of volatility may continue to distribute and redistribute trading volumes and users across derivatives exchanges.

Jim Nevotti, President at Sterling Trading Tech, told Finance Mangates that “we’ve seen historic and truly unprecedented volatility and activity in both the crypto and traditional markets over the past few months with many firms underlying tech infrastructure effectively being stress tested daily. “

“Fast and stable technology is crucial during periods of peak volatility in order to properly serve the institutional players entering the space post-Halving,” he said.

“The ability for professional traders to adapt quickly to sudden changes in both the traditional and crypto markets will continue to be critical as even seconds of downtime to switch platforms can have an impact during periods of extreme volatility.”

Therefore, at the end of the day, he who has the most reliable and compliant infrastructure–will win.