After a fairly uneventful news week, Friday has brought a few developments that are rather, shall we say, unexpected.

Beyond the crypto world, United States President Donald Trump announced on Twitter this morning that he and First Lady Melania Trump had tested positive for COVID-19, a plot twist that has sent shudders down into the global economy.

The news was originally broken by none other than the President himself, who tweeted “Tonight, @FLOTUS [Melania Trump] and I tested positive for COVID-19. We will begin our quarantine and recovery process immediately. We will get through this TOGETHER!”

Tonight, @FLOTUS and I tested positive for COVID-19. We will begin our quarantine and recovery process immediately. We will get through this TOGETHER!

Within the cryptosphere, the New York Times reported on Thursday that American authorities brought criminal charges against the owners of one of the world’s biggest cryptocurrency trading exchanges, BitMEX, accusing them of allowing the Hong Kong-based company to launder money and engage in other illegal transactions.

These four co-founders include BitMEX CEO, Arthur Hayes, and three co-owners: Benjamin Delo, Samuel Reed and Gregory Dwyer. Samuel Reed. Hayes was arrested in Massachusetts on Thursday; the other three men are still ‘at large’.

In separate ways, both of these stories could have big implications for crypto markets, particularly, for Bitcoin. 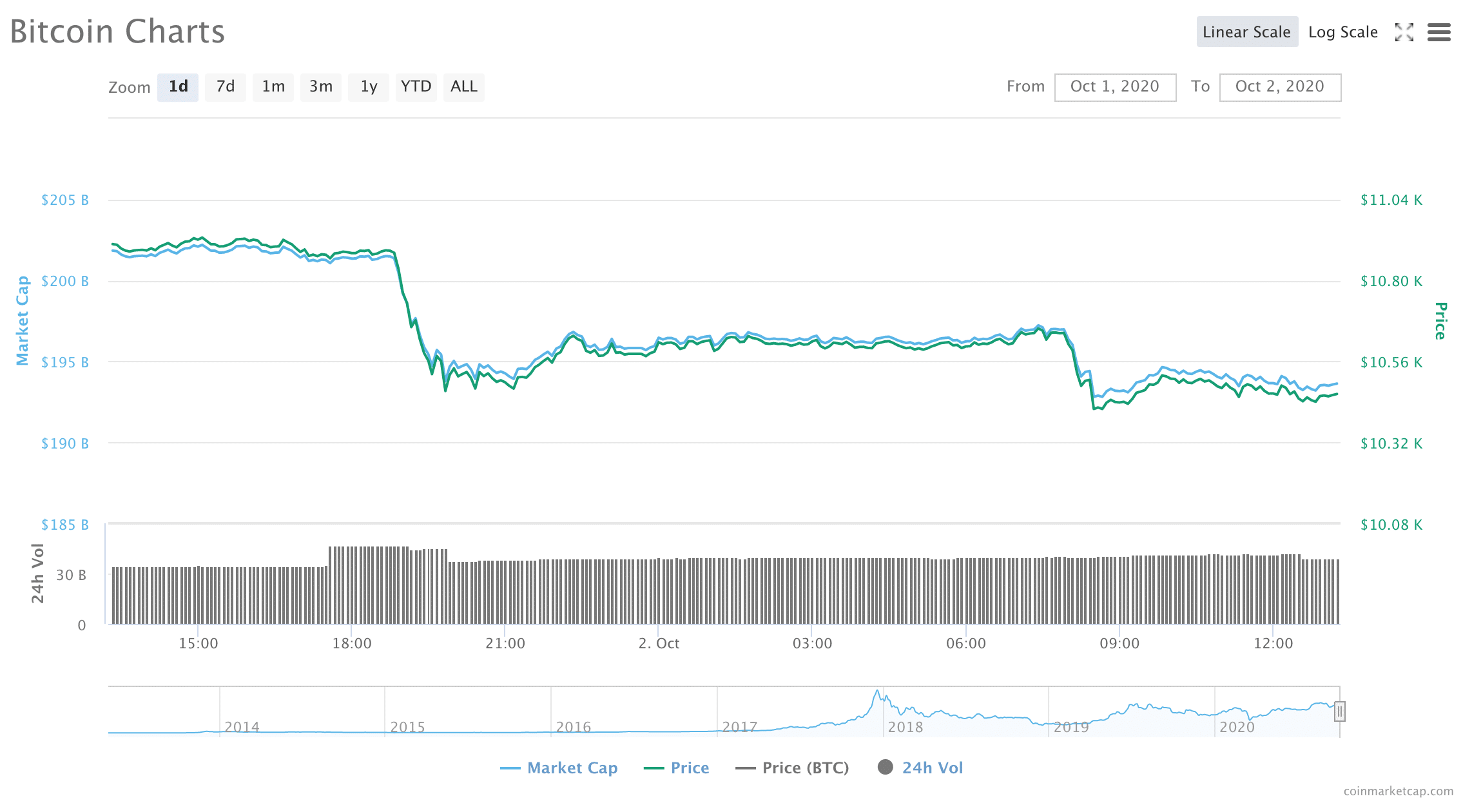 Further Crypto Price Drops Could Be on the Horizon

While both the BitMEX indictment and Trump’s COVID case made it into the New York Times today, one of these just might be more significant than the other.

Indeed, while the BitMEX case is more specific to the crypto world, Trump’s COVID contraction seems to be having a more powerful effect on crypto markets. The BitMEX news caused a 3.7% fall in the price of BTC; prices rebounded slightly before Trump’s COVID Tweet sent them back down again.

What is next? If traditional financial markets are any indication of what is coming for BTC and other cryptocurrencies (and, historically speaking, they have been), further price drops could be on the horizon.

Markets outside of the cryptosphere are reacting to Trump’s COVID announcement similarly to the way that they reacted to the widespread lockdowns in March: for example, gold is up, continuing the rebound that began ahead of Tuesday’s presidential debate.

However, stock markets are another story.

The BBC reported that “stock market futures showed that all three of America’s main indexes – the Dow Jones, the S&P 500 and the Nasdaq – are set to drop by at least 1.5% each when trading begins on Friday.”

Additionally, CoinDesk reported shortly after Trump announced his COVID case on Twitter, “the Australia ASX All Ordinaries is down 1.35%. In the U.S. markets, S&P 500 futures fell about 2%.”

”US Equities Plunge Following News That Trump Is COVID-Positive. Crypto Shitcoins Are Plunging Too.”

A number of analysts are predicting that BTC will go the way of the stock market, just as it did when the COVID financial crisis began in March of this year.

Nouriel Roubini, renowned American economist and chairman of Roubini Macro Associates LLC, wrote on Twitter that “the myth that crypto is a hedge in risk-off episodes totally failed when Bitcoin & other Shitcoins plunged 50% or more when equities plunged 35% in Feb-Mar.

“Same is happening now as US equities plunge following news that Trump is COVID-positive. Crypto Shitcoins are plunging too.”

The myth that crypto is a hedge in risk-off episodes totally failed when Bitcoin & other Shitcoins plunged 50% or more when equities plunged 35% in Feb-Mar. Same is happening now as US equities plunge following news that Trump is Covid-positive. Crypto Shitcoins are plunging too

”Pretty Bullish to Me.”

However, analysts who have been less critical of BTC and other cryptocurrencies in the past seem to believe that BTC will not be too drastically affected by today’s chaotic news cycle. After all, it has not been affected, at least, not yet.

“BitMEX charge and Trump contracting COVID-19 couldn’t take Bitcoin far below the $10k level even briefly,” wrote Joseph Young, crypto market analyst and Forbes contributor, on Twitter. “The resilience of Bitcoin during this cycle is quite impressive.”

Pretty bullish to me.

Renowned crypto market analyst, Willy Woo even believes that the BitMEX story could be a good thing for BTC in the medium to long-term.

“Oh, the irony,” he wrote. “The BitMEX news caused a pullback that’s WAY LESS than a proper liquidation event on BitMEX. It didn’t even break support. The BitMEX news is good for Bitcoin’s adoption also bullish for medium-term and long-term price.

“I was thinking the same thing,” wrote Twitter user @Grenouille212 in reply. “~3% correction for a major exchange going down? In the ‘old’ days… add a zero!”

It is true BTC’s <5% immediate reaction to either (or indeed, both) of these events could almost be considered a non-reaction in the history of an asset that is known for its volatility.

Still, the real reaction to these two events, and to their related affairs, could still be on the horizon.

For example, Trump’s COVID case will likely have a significant effect on the US Presidential election cycle, which in turn, could have a big effect on the price of Bitcoin.

Indeed, even before Trump tested positive for COVID, the American election cycles were having an increasingly powerful effect on cryptocurrency prices; and it is not all sunshine and roses.

eToro analyst, Josh Gilbert commented to Finance Magnates that “when looking at the technicals for Bitcoin, it’s appearing very bearish. It’s below its 10-day and 50-day moving averages. However, as volatility in the markets increases over the next few weeks, it’s likely we will see the move of investors back towards Bitcoin as we did in August.

“In August, Bitcoin was trading about 12,000 and gold was also bullish above 2,000. VIX futures are also expected to increase throughout the end of October and the beginning of November, before dropping off at the start of December, clearly showing that the elections will cause significant market volatility.”

What Could a Trump Victory Mean for BTC?

In particular, markets seem to have been reacting to news that places one candidate in the lead over the other: JP Thieriot, CEO of Uphold told Finance Magnates that “to the extent that Bitcoin is a shorting of the status quo, you’d expect crypto to ‘moon’ if Trump wins.”

In other words, the civil and economic unrest that might follow a Trump re-election could be a further boon to Bitcoin, which has benefited heavily from this year’s coronavirus-related economic turmoil.

eToro’s analyst, Josh Gilbert also commented to Finance Magnates that “it appears that many investors on the stock market favour Trump, especially since he’s cut taxes over the years for the super-rich, which has been bullish for the stock market.

“Taking all of this into account, we are expecting to see uncertainty with the US elections. This is likely to see investors pile into safe-haven assets at times of uncertainty, with Bitcoin being one of those assets. Bitcoin has outperformed most assets so far this year, and a weakened dollar caused by the US elections is likely to be a strong driver.” 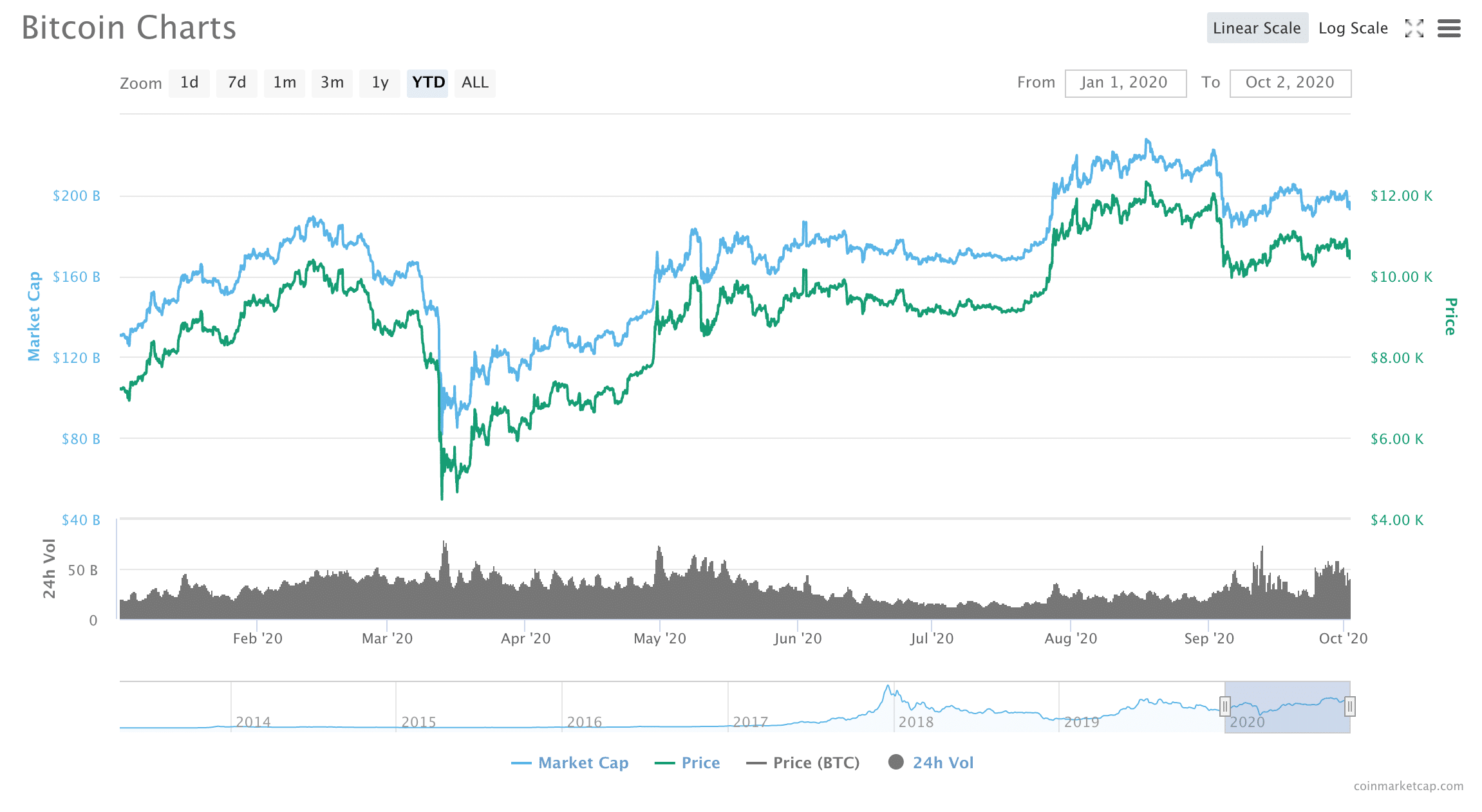 Could a Biden Victory Be a “Return to Normalcy”?

Uphold’s JP Thierot also said that “by contrast, Biden would represent a turn back towards normalcy, which might take the edge off the short. Then again, democrats tend to regulate more heavily, so there’s a big unknown.”

On the other hand, though, Shayne Coplan, chief executive and founder of Polymarket, told Finance Magnates that “many speculate that, given [Biden’s] proposed economic policies, Biden’s presidency could correlate with a further decrease in treasury yields.

“In that case, a Biden-Harris victory could trigger an influx of demand for alternative yield opportunities, and thus accelerate traditional finance’s adoption of DeFi,” Mr. Coplan said.

“Combine either with the Fed continuing to do whatever it takes to keep the safety net under the US economy and you can see how a mountain of debt, greater than all the debt anyone had in history, will come bearing down on the US dollar,” he continued.

“We may be able to hold back the debt for a while, but each passing day we deplete the trust the entire world has in the dollar and soon enough we will be left holding the bag with all these worthless dollars. While this may be good for Bitcoin and crypto, it is not good for democracy and for the world order as we know it.”