MiFID II is nearly two weeks away from taking effect, though this has not stopped the European Securities and Markets Authority (ESMA) from clarifying some key points. Ahead of its implementation on January 3, 2018, numerous financial venues are still looking for clarity in order to reconcile their reporting and regulatory obligations.

In its latest Q&A, ESMA has released a new document entailing ten new responses that covers several relevant topics surrounding MiFID II and MiFIR. The document can be read by accessing the following link, with the specific Q&As including a range of different areas such the following: 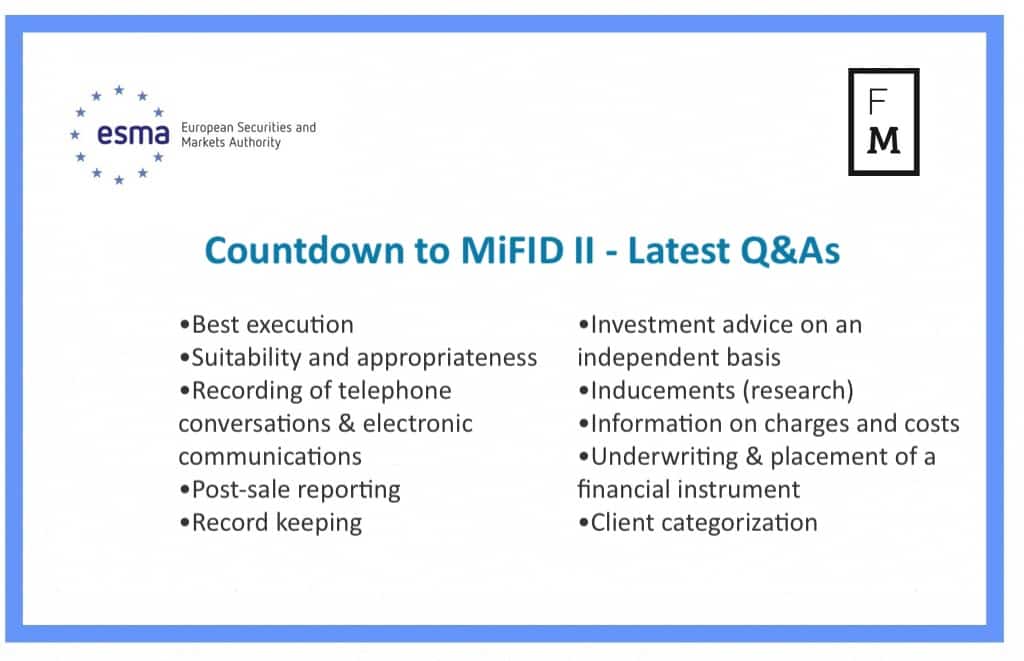 MiFID II is noteworthy for its scope of regulation, given that it includes a much larger suite of asset classes. The landmark regulatory regime will help shore up needed transparency across several other segments in the industry as well, though how effective and streamlined this transition process may ultimately be is anyone’s guess.

The new Q&A does make notable mention of several lingering topics such as best execution and research considerations. These in particular have been marquee areas of focus in 2017. In the latter instance, banks have been obligated to disclose research costs, which previously fell under a more clandestine structure.

Consequently, many studies and experts have pointed to a major shakeup in this space as research spending could be curtailed with the passage of MiFID II moving forward. In general however, the purpose of ESMA’s Q&A remains the promotion of common supervisory approaches and practices in the application of MiFID II and MiFIR for investor protection topics.

Moving into 2018, ESMA will continue to develop its Q&A on investor protection topics under MiFID II, most certainly after it comes into effect on January 3. It is quite likely that there will be an initial lag and confusion radiating from some parties, hence the group’s emphasis on both adding questions and answers to the topics already covered.