New Zealand’s regulatory landscape has undergone considerable changes over the past few years. The creation of a new regulatory organisation, the Financial Markets Authority (FMA), occurred in 2011, with the FMA boasting a broader mandate and greater powers vis-à-vis its predecessor. This was followed up with the introduction of the Financial Markets Conduct (FMC) Act in 2013.

The FMA has drawn on the wider range of regulatory responses available to it to combat poor compliance and misconduct.

As the financial watchdog winds up the phased implementation of the FMC Act, a new report released today reveals how these changes have been reflected in FMA’s enforcement and investigations activities over the past year.

The report, which covers the period from July 1, 2014 to June 30, 2015, reveals that the FMA has drawn on its new powers and the wider range of regulatory responses available to it to combat poor compliance and misconduct, noting that 77% of completed investigations resulted in out-of-court sanctions.

During the reporting period, the FMA secured $51.14 million in compensation for investors, and $1.71 million was awarded in penalties and fines. In total, the FMA was involved in 51 investigations and 28 litigation matters throughout the year.

The past year also saw a reorientation in the kinds of cases with which the kiwi regulator was engaged. Many of the investigations into collapsed finance companies, which were  a result of the global financial crisis, had been wound up, allowing the FMA to focus its attention on primary and secondary markets issues. Indeed, the report notes that 63% of investigations focused on disclosure obligations, insider trading and market manipulation issues, with the failure to file financial statements a stand-out issue. 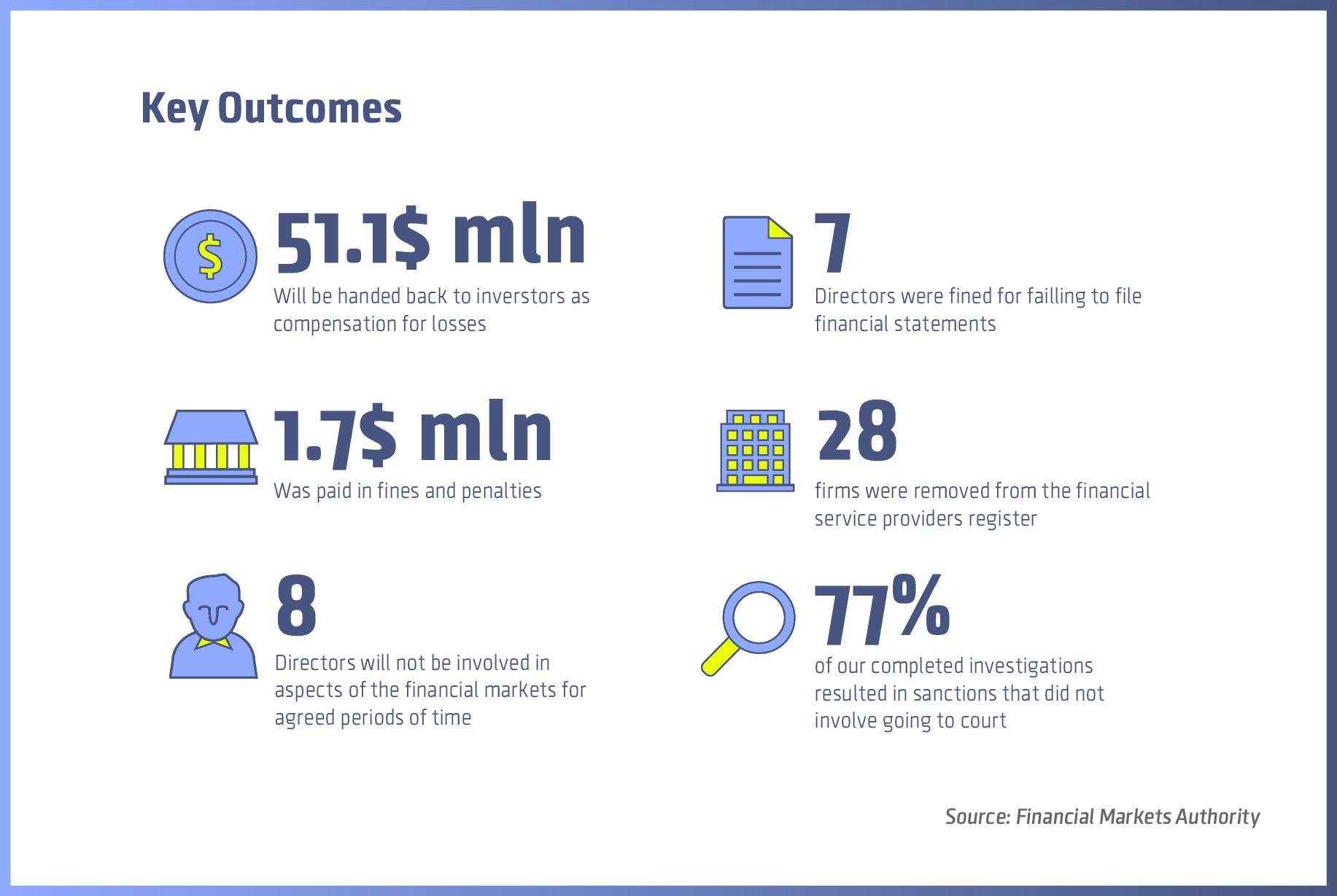 Moreover, the report highlights that in a number of cases, firms still had a long way to go to tighten up their systems and controls to ensure adequate governance and a culture of compliance.

Of the 28 litigation matters, six resulted in court judgments, 12 are still in court, two were settled, one was withdrawn following FMA intervention, and the remainder were either resolved before proceedings were filed or were referred to another agency.

Non-court outcomes have been achieved in some instances as a result of firms and individuals engaging directly with the FMA to address our concerns.

Belinda Moffat, director enforcement and investigations, commented, “The FMA has taken considered action to investigate and hold to account serious misconduct that threatens the integrity of the markets and the way that financial services are delivered to customers. A key objective underpinning our action is to raise investor and market confidence and in turn to support economic growth in New Zealand.

To achieve this objective, we have used a wide range of regulatory tools this year. However, the market and investors should also clearly see that serious misconduct will attract the full force of the FMA’s powers. Non-court outcomes have been achieved in some instances as a result of firms and individuals engaging directly with the FMA to address our concerns. We want this kind of response to continue as we bed down the new regime and strive to achieve a confident and efficient market.”

Did they specifically isolate money repaid that was a direct result of SNB? In other words, that event might be skewing the stats. Also, do they keep track of alledged monies that were never repaid back?
Any plans to introduce any insurance scheme against investors?

Hi Jon. Actually, the report did not refer to any of the points that you allude to. But thank you for your questions, which we will keep in mind as we continue to report on matters FMA.