With a wealth of experience across the UK, Europe and North America and having sat on both sides of the regulatory fence, Everett moved to New Zealand in February 2014 to head up the country’s financial regulator.

Everett’s first task: to navigate the organisation as it embarked on its new mandate.

The challenges presented in New Zealand waters were of a different nature than in larger markets such as the UK, Europe and North America. While those jurisdictions faced the tidal waves of collapsed banks and overly complex derivatives markets, New Zealand was grappling with an unchartered retail environment, in which issues of transparency and market conduct were paramount.

As such, even prior to the financial crisis, New Zealand had initiated sweeping reforms of the regulation of financial markets. Following an extensive consultation process, a new and improved financial watchdog, the FMA, was established in 2011, with a broader mandate and greater powers vis-à-vis its predecessor, followed by new legislation, the FMC Act, in 2013.

In essence, the reforms have sought to increase the regulator’s coverage in a bid to better govern how financial products are created, promoted and sold. This includes a greater onus on regulated firms to play responsibly.

During his tenure, Everett has focused the strategic direction of the organisation in accordance with the dual-phased implementation of the legislation, which is evidenced in the publication of the Strategic Risk Outlook.

Everett described the reforms: “If you look at how financial services were regulated before, [regulators] didn’t know who was operating in their space…So they couldn’t gauge what was happening in any particular sector and take preventative measures to nudge firms away from bad conduct.”

At a time when many other regulators around the world have been reducing operational expenditure, the FMA has had to boost resources to meet their enhanced mandate.

Everett explains: “As we have been rolling out new requirements, we have required a major pick up in resource…Some of that may come off once we have everything in place.”

In a market with more players, we probably will have to look at our resources.

The regulatory reforms only partially account for the beefed up watchdog. Indeed, strong economic growth has meant that the waters the FMA patrols are also expanding. Indeed, ensuring the health of the New Zealand market is an expansive task.

Everett: “Part of our mandate is to help the New Zealand economy grow and capital markets to develop…We have had lots of new companies listed, crowd funding, p2p lending, etc. So in terms of the playing field which we are refereeing on, its much bigger than when we started…In a market with more players, we probably will have to look at our resources.” 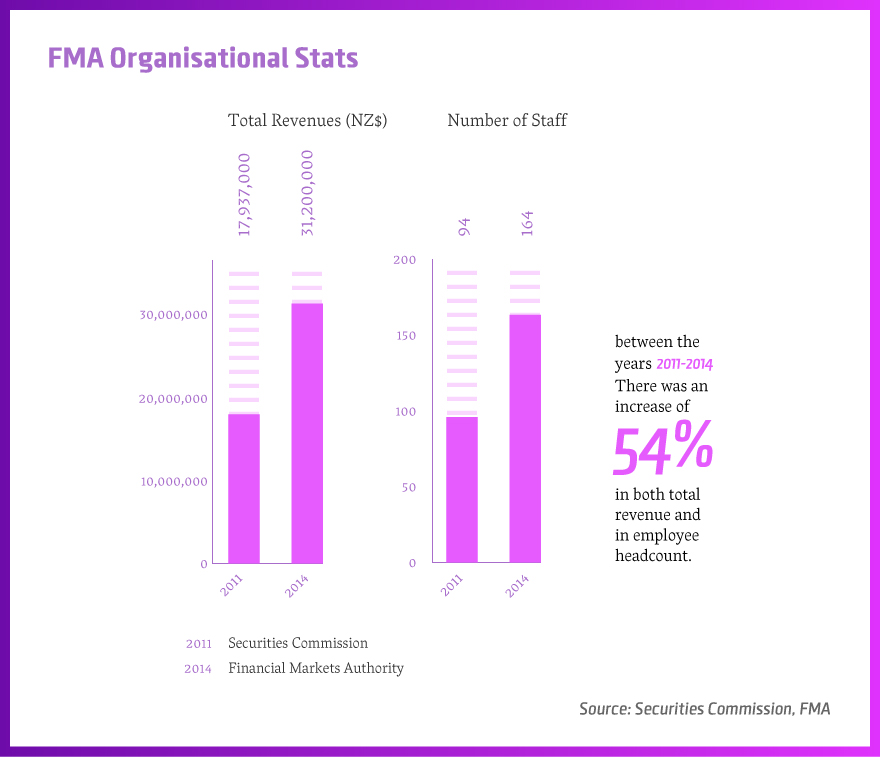 In another sign that New Zealand is steering away from international trends, which have seen overseas regulators levelling fewer and harsher fines, the FMA’s modus operandi has rather focused on a programme of proactive engagement with regulated firms.

“Because [the new framework] is so new, there is a lot of pressure on us as the regulator to go out and articulate what it is we are trying to do and how we are going about it … We have spent a lot of time going out to the regulated firms talking about what good governance looks like.” 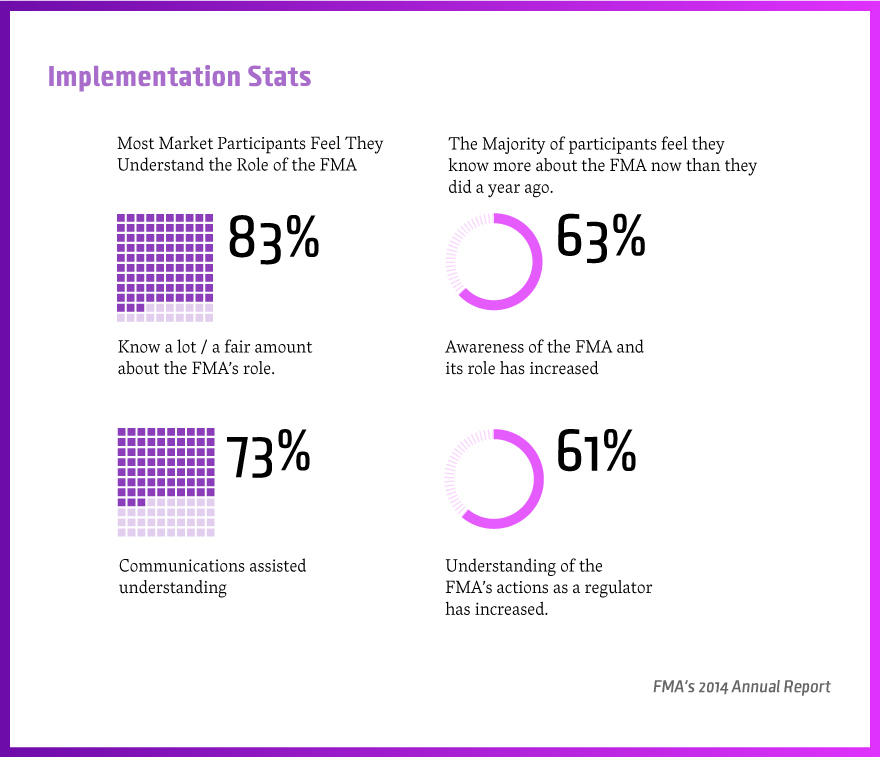 The new approach has also meant that firms have had to become more actively involved in the regulation of the industry. Indeed, the new licensing regime and disclosure obligations place a greater onus on firms. Despite industry generally being on board with the new framework, “this does not mean they haven’t felt the pain of getting licensed and staying licensed.”

New demands on firms have been a wake-up call in New Zealand.

Everett: “The new legislation has quite a lot of focus on fair dealing … [regulated firms] need to be able to demonstrate management and governance oversight: the extent to which the firm has controls in place that allow them to look at trading, both as its happening and afterwards. There are issues around actually storing the data so that when a regulator comes asking, the trade and email data are there.

This has been a wake-up call in New Zealand. It means creating a structure where trading patterns which may be problematic get looked at by the firm before they get looked at by anyone else; being able to monitor what’s going on in their building and the impact it’s having on the market. That would be very familiar territory for a lot of people in Europe.”

The novelty of the regulatory approach also means that New Zealand regulated firms are struggling to find adequate regulatory advisory services at home.

In a small economy comprised predominantly of small-scale enterprises, there has been a thoughtful and deliberate attempt to increase the array of capital raising platforms. Consequently, in addition to the New Zealand Exchange (NZX), investors and companies enjoy a diversity of other capital raising options, such as a new market for small, high growth businesses (NXT), crowdfunding platforms, and P2P lending.

“The idea is to provide a greater opportunity to invest at different levels of sophistication and for companies to raise money in different ways.”

People worry about a domestic crash, but the reality is what will happen to New Zealand will be something that is going on somewhere else.

This diversity also creates a spectrum of risk. Everett pointed out that an emergent concern is ensuring that these new platforms do not become dominated by the big fish. For example, banks have started to take big stakes in P2P lending platforms.

“It is quite interesting how the big players, who are supposed to be being disintermediated by P2P lending, have started to move in. We therefore have to be careful that we don’t disadvantage the smaller players … We need to make sure that we don’t accidentally force a concentration into the big international players.”

On the issue of Greece, Everett simply stated that a small island nation like New Zealand, adrift in a global economy, is very much at the whims of world events.

“People worry about a domestic crash, but the reality is what will happen to New Zealand will be something that is going on somewhere else …[Rather than domestic issues], look at the dollar, at inward investment, at China, which obviously has a big impact on New Zealand as a trading partner. There is a lot of focus on Greece because all big things do have an impact.”

Finally, one issue that has manifested itself in New Zealand is that of rogue FX trading firms, which prey on domestic investors.

While the new legislation regulates a bunch of FX instruments at the high-risk end of the speculative spectrum, some jurisdictions do not. This leaves unsuspecting and uninformed FX traders in New Zealand exposed.

While the new legislation regulates a bunch of FX instruments at the high-risk end of the speculative spectrum, some jurisdictions do not.

Everett explains: “New Zealanders have been called up to get involved in quite speculative trading. People have handed their money over to outfits not liable to any agent in New Zealand or probably any agent anywhere. When things go wrong, they don’t know who to turn to.”

As such, the FMA has been engaged in what Everett calls “policing the periphery.” This involves both preventing overseas firms from becoming licensed in New Zealand and warning local investors of predatory overseas outfits.

All in all, the FMA has been one of the most active regulators of late, completely redefining the space in which regulated firms and investors operate.