Daily turnover in OTC FX markets in April 2019 reached $6.6 trillion, up from $5.1 trillion three years earlier, while the US dollar retained its top currency status, being one side of 88 percent all executed trades, according to the Bank of International Settlements (BIS) report published in mid-September.

Forex expands again while traders are noticing a worrying trend

While the growth rate of the total daily turnover in the currency market is undeniable and amounted to 30 percent ($1.52 trillion), analyzing the individual components can highlight an interesting correlation. When outright forwards, foreign exchange swaps, and currency swaps were gaining dynamically, spot transactions and FX options found themselves below the levels reported six years ago.

Although there is a noticeable rebound from the 2016 lows, it was not possible to overcome the already existing all-time highs from 2013. The value of spot transactions in 2013 amounted to $2.05 trillion per day, in 2016 only to $1.65 trillion, and in the current year, it bounced back to less than $2 trillion. The discrepancies are even clearer in the FX options market, whereas in 2013, the daily turnover stood at $336.85 billion; three years ago, it fell to $254.41 billion, and according to the latest data, it has now reached $294.10 billion. 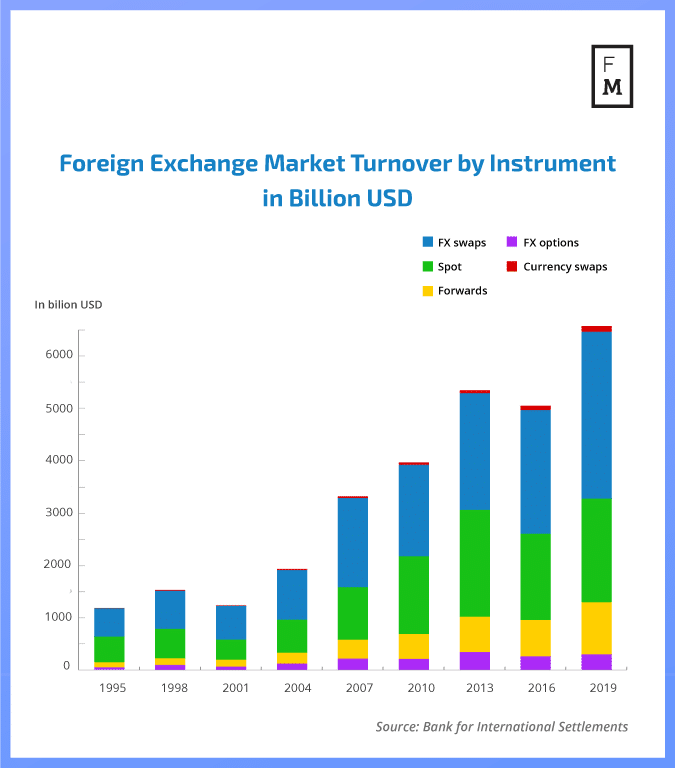 Meanwhile, when analyzing the percentage share of all five types of instruments in total FX trading over the last 24 years, values were usually similar. The median and average for FX swaps is 48 percent, and a disproportion can be observed only (again) in the case of spot transactions. In nine BIS reports in recent years, the median for these instruments stood at 33 percent market share, while the average at 35 percent, which clearly indicates that 2019 results (30 percent) found themselves below the mean values. London is still the king, even though the GBP may have lost its edge.

Dominance of US Dollar

The dominance of individual currencies is another important issue described within the BIS report. The US dollar (USD) continues to hold a key position, being on one side of 88 percent of all transactions. Compared to 2016, the significance of the euro (EUR) increased by 32 percent, and the share of the Japanese yen (JPY) slipped by five percentage points. However, the currency maintained its third position among the most active FX trading assets. Once again, the emerging market economies (EMEs) currencies increased in importance, reaching a 25 percent share in daily global trading.

While the pound sterling and USD/GBP share in the daily FX turnover may be falling, the United Kingdom and especially London City still hold the top spot within the largest financial centers in the world. The list did not change much since the last report, and yet the UK, the US, Singapore, Hong Kong SAR, and Japan are the busiest trading spots, with 79 percent share of all foreign exchange trading. In the constant rivalry between the two sides of the pool, the London trading hub has increased its advantage over New York, and its share of FX trading rose by six percentage points to 43 percent of total Forex activity in the reported period. At the same time, the share of trading that takes place in the US slumped by three percentage points to 17 percent.

To get the full article and the bigger-picture perspective on the condition of global forex market , order our latest Quarterly Intelligence Report.