Global FX trading has jumped by one third between two consecutive triennial surveys, the Bank for International Settlements said on Monday, with a strong uptick in swaps trading accounting for most of that increase.

The increase in total FX turnover is mainly due to the rise in FX swaps, which is primarily used by market participants for liquidity management and hedging currency risks. This figure printed $3.2 trillion in 2019, adding over $800 billion or 34 percent up from the previous report, according to the BIS survey.

This overshadowed a 20 percent increase in spot trading, for which the average daily volume climbed by $325 billion to $1.98 trillion between 2016 and 2019. As such, the share of spot trades in global FX activity fell to 30 percent in 2019, down from 33 percent in 2016. By contrast, FX swaps continued to gain in market share, accounting for 49 percent of total FX market turnover in April 2019.

In the most comprehensive report into the 24 hour-a-day FX market, which draws many conclusions that are broadly applicable in the global markets, the BIS says in terms of geographical distribution of turnover “FX trading continues to be concentrated in the largest financial centres.”

London retains role at the heart of the global forex

This was backed up by a Foreign Exchange Committee (FXC) survey, referenced by the BIS, which showed that transactions per day in the New York FX market fell from a peak of $993.5 billion in 2018 to $810.9 billion in April 2019, down 18 percent from the ADV figure in the year before.

Elsewhere in its report, BIS notes that the ranking of these trading hubs remained unchanged compared to 2016. But within that, there were notable shifts. London remains the global FX trading capital by some distance, and its market share rose six percent to 43 percent in April 2019.

Asia’s main centers – namely Hong Kong, Singapore, and Tokyo – saw their combined share of trading remain relatively stable after it declined slightly to 20 percent of the global total from 21 percent. Compared to three years ago, New York’s share slipped to 17 percent in 2019, relative to 20 percent in 2016. 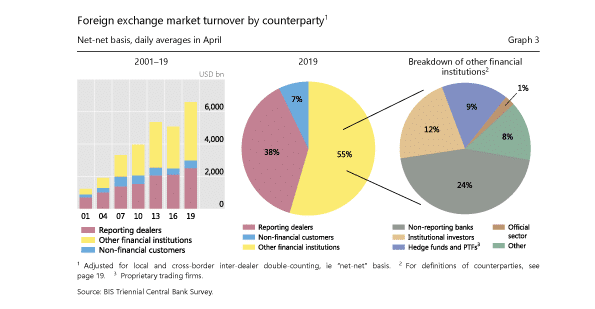 In addition, mainland China was a big winner as its average daily volume in OTC FX instruments jumped nearly 90 percent in 2019 to $136 billion, currently ranked the eighth largest FX trading hub, up from the 13th place three years ago.

In terms of specific currencies across the spot market, the US dollar strengthened its position as the world’s most dominant currency. The buck retained its dominant currency status on the side of 88 percent of all FX transactions, virtually unchanged from the prior survey.

Meanwhile, the euro’s role in world FX trading has increased from three years ago. The single currency’s share rose to 33 percent from 31 percent, the BIS said. It was 39 percent in the same month a decade ago. 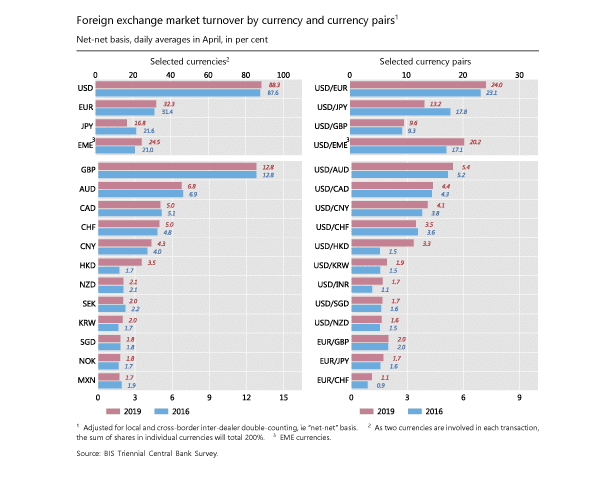 By contrast, the Japanese yen’s share fell five percentage points to 17 percent, although it remained the third most actively traded currency (on one side of 17 percent of all trades).

As in previous surveys, EM currencies and China’s renminbi also saw their market shares advance, to 25 percent and 4.3 percent respectively. With $284 billion in turnover, the Chinese offshore currency remained the eighth most traded currency, ranking just after the Swiss franc.