According to the trading volumes survey for 2015 published by the Futures Industry Association (FIA), the US Chicago Mercantile Exchange (CME) is still in first place among 78 exchanges of derivatives instruments in the world, reporting trading volume growth to 3.5 billion contracts (+2.6%) year-over-year (YoY).

The official press release published by the Dalian Commodity Exchange (DCE) states that all of the three commodity futures exchanges in Mainland China ranked within the top 10 entities in terms of number of contracts. DCE’s trading volumes in 2015 totaled 1.116 billion contracts which allowed its jump in the rankings to 8th position (from 10th in 2014).

Much of exchange’s products found themselves among the most traded contracts on a global basis. This refers first of all to metals, raw materials, energy and agricultural instruments. At the end of 2015, the value of DCE’s open interest stood at 5.325 million contracts, an increase of almost 40% compared to the previous period.

As shown in the rankings below, the strongest YoY percentage gain was recorded in the case of BATS Exchange – the third-largest equity market in the United States – trading volumes increased by 97% over 2014, reaching 398 million contracts. 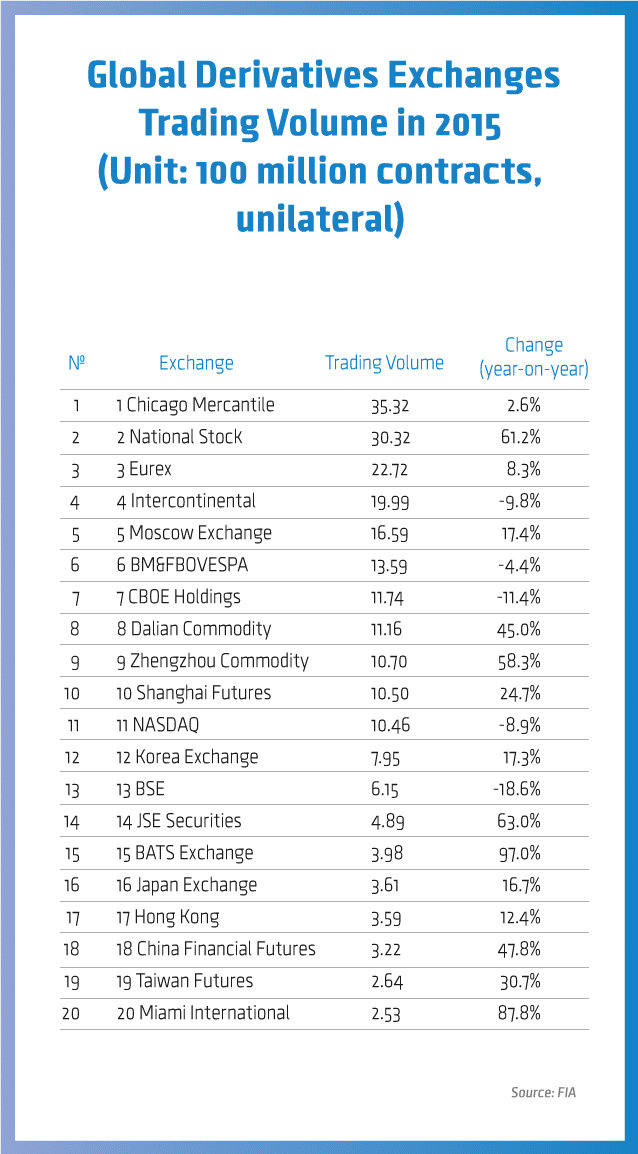 Additionally, the most substantial declines were noted by the Bombay Stock Exchange (BSE), which traded nearly 19% fewer contracts than a year earlier, reporting volumes near 615 million. A loss of more than 11% was also recorded by Chicago Board Options Exchange (CBOE) Holdings (down to 1.174 billion contracts).