The Financial Ombudsman Service (FOS) has published its first quarter statistics for 2018/2019. From April to the end of June this year, the British Ombudsman received a notable uptick in new inquiries and complaints.

Each quarter, the FOS publishes an update on the financial products and services consumers have contacted them about. In the report, the number of new inquiries and complaints the ombudsman receives plus the number of complaints that were settled in the consumer’s favor are included. 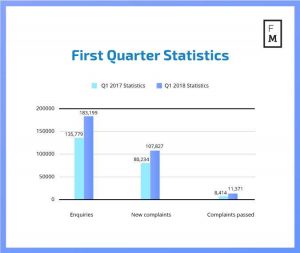 Payment Protection Insurance Complaints to the Fos Dominate in Q1

The Changing Tactics of Scammers

Not only did the financial ombudsman experience an uptick in complaints from investors in the United Kingdom, but it also noticed a change in tactics from scammers.

In a statement which accompanied the figures, the Chief Ombudsman, Caroline Wayman, said: “it was only relatively recently, in 2015, that we shared our insight into banking complaints involving phone fraud. Back then, it seemed the fact older people were more likely to use landlines meant they were particularly at risk of “no hang up” scams.”

“Today,  it’s often loopholes in new technologies, rather than in old ones, that fraudsters are using to their advantage. Your first step toward being scammed may be putting your details into an identical, but fake banking website – or responding to a text message that, on the face of it, looks like it’s from your bank.”