2018 marked a year of big changes for the foreign exchange (forex) industry, particularly for the European Union which saw the implementation of new regulations for the retail sector. However, while the market was turned on its head in Europe, across the North Atlantic Ocean forex providers in the United States were quietly making a comeback.

In terms of FX providers in 2018, the market in the United States was small and has been for years. GAIN Capital and OANDA are the only two remaining brokerage companies focused on providing forex trading to US customers. In addition, the sector is also serviced by two discount brokerages: Interactive Brokers (which only on boards Eligible Participants) and TD Ameritrade.

Although fewer in number than the European market, the performance of US trading providers was on an upward trend during 2018, indicating a market recovery.

Based on data disclosed by the four companies, we can see that the number of active retail forex accounts in the US grew dramatically, with the fourth quarter showing the strongest results in years. 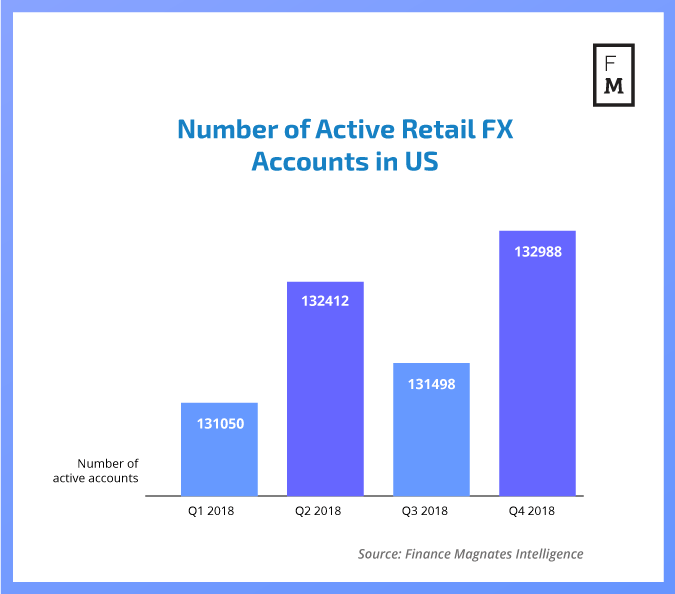 What Caused the US Market Recovery?

The signs of a market recovery in the United States is welcome news, but what has caused this? Speaking to Finance Magnates Vincent Cignarella, Macro Strategist and the voice of America’s Global Squawk at Bloomberg believes the flexibility of the FX market played a key role.

“The foreign exchange market tends to be like the escape valve for the other asset classes. When there are problems within a country – whether it be the monetary or financial side – it’s difficult for traders to quickly turn a fixed income position, or an equity position, for instance. So FX becomes the real hedge for portfolio risk and country risk many many times,” Cignarella said.

On the overall health of the FX market in the country, he continued: “I think it’s quite healthy. Volumes are good. There’s been a lot of activity, especially in the fourth quarter of 2018. Going into 2019 it remains to be seen how that holds up. Volumes in FX wax and wane but I think over the years, we’ve been comfortable with a pretty steady trend to the five trillion mark. It’s one of the purest trading markets out of the asset classes.”

“I don’t think they would decline markedly [in 2019] but I think growth is going to be a little begrudging going forward… it’s still a healthy product with healthy volumes,” he concluded.

The Chief Executive Officer (CEO) of GAIN Capital, Glenn Stevens, also noted that the flexibility of the FX market was one of the key contributors to the solid market performance in 2018.

“After a long bull run in the U.S. equity market, investors are no longer feeling as optimistic about equities and we’re seeing demand for alternative investment products, uncorrelated to equities, begin to grow again. FX is a popular choice for investors given the market access and liquidity, 24-hour trading, and robust regulation in place to protect retail traders,” Stevens noted.

Finance Magnates also reached out to TD Ameritrade who saw an increase in the number of trading accounts opened with them. We asked what was the biggest contribution to their recent growth in the forex sector.

Responding to this, JB Mackenzie, the Managing Director of Futures & Forex at TD Ameritrade said: “In 2018, the financial markets saw a return of volatility and the Forex markets were no different. While market moves… drive customer interest in the forex markets, the real driver behind our increase in accounts is TD Ameritrade’s value proposition.”

Looking to the future, Mackenzie added: “With markets continuing to be volatile globally and investors interested in participating in the forex markets, we do anticipate continued growth of new accounts and participation from our investors.”

Kicking off the month of February of this year was another piece of positive news for the forex sector. This, of course, was the announcement that London-based IG Group had launched its US subsidiary IG US, marking the first new entrant to the market since 2009, as Finance Magnates reported.

Over the past decade, prohibitively high capital requirements in the US gradually forced IG itself and many other firms out of the market. Now, through its subsidiary IG US, the broker will focus on providing forex trading to its clients.

All in all, increased competition and an uptick in demand for retail forex trading make the US market look the strongest it has in a long time.

can you post more history of new accounts? One year is hardly enough to shout from the rooftops that a comeback is emerging.