I’ve finally put my hands on FXDD and Advanced Market’s numbers and can now post the full and complete report (only thing still lacking is number of FXDD’s accounts in Q3 but that doesn’t really change anything).

All I can say is – God knows how do Advanced Markets survive in this market or why do they continue being registered as RFED. It seems the number of their retail clients is dismal – a total of 58 in Q4 while their profitability has steadily decreased from 50% in Q1 2010 to 22% in Q4 2010. Advanced Markets also registered the biggest drop in profitability QoQ – whopping 13%, however just like in IG Markets case this number doesn’t really mean much when you have less than 100 clients.

FXDD on the other hand has a more significant presence in the US than I imagined making it 6th largest retail forex broker in the US in terms of number of accounts.

You may also notice that Oanda’s numbers have slightly changed (profitability decreased from previous report two weeks ago). For unknown reason they seem to have edited their numbers (and of Q3 as well). Oanda still leads by far in terms of account profitability however this may change in the next report as NFA has recently clarified how the account profitability should be calculated: reports from now on won’t include dormant accounts which were paid interest thus making them profitable (more on this here). I know for a fact that many brokers were unhappy with Oanda’s numbers and I can only speculate that some of them asked NFA for ‘clarifications’ on this issue – hence the new ruling.

Total number of active accounts in the US at Q4 2010 was 129,494. Add to that ‘dormant’ accounts and you probably get around 200,000. You are welcome do deduce how many active retail forex accounts there are worldwide but I’d put them anywhere between 1 and 1.5 million. Recently I’ve had many inquiries from interested parties who are looking for this ballpark figure for various reasons and for the first time they have a credible (and official) figure to rely on when making their assumptions. 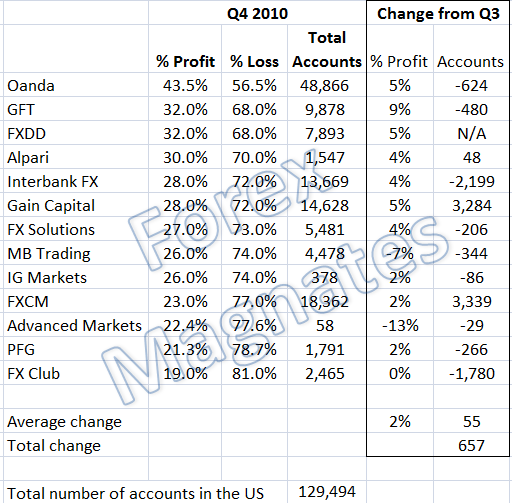 When I posted this earlier the change in number of accounts got skewed for all brokers (never just copy/paste formulas in excel guys…). The version you see now is the correct one. Thanks to all the brokers (you were many) who wrote to me about this and also apologies for the inconvenience – though i suppose some brokers would prefer the earlier version…

Do you really need such a loud watermark on the graph. The numbers behind it are hardly legible. I wouldn’t worry so much about people stealing your image.

should point to Oanda’s accounts number , maybe it is high because Oanda has sub accounts , every client could open sub accounts as he likes …

A bit lighter blue on the watermark would be nice in the future – it makes the tabular numbers easier to parse and compare, while still keeping the watermark of your (very nice) blog intact.

Statistics don’t always tell the whole story and this firm prefers to keep a low profile, which certainly sets them apart from the crowd. Four or five or more major Korean securities brokers conduct their margin FX business thorough Advanced Markets. The firm has other wholesale ventures elsewhere in Asia, Europe and the US. In addition, the firm’s pure (that is they don’t screw around with skewing prices or asymetrical slippage like some other “NDD” platforms) Direct Market Access to 10 major FX bank desks and super low-latency platforms also attract larger clients, including small and medium-sized CTAs, hedge funds… Read more »