It seems Saxo not only maintained its strong profitability from first half of 2010 but has actually grown way beyond industry averages. If public brokers like FXCM and Gain reported earnings higher by 16-23% Saxo has managed to actually triple its net profit. Not only that, but between the pages you can find that Saxo has managed to sign Barclays as a White Label partner. Barclays will join the likes of Citi and even Microsoft who already lease Saxo’s solution. It seems Saxo, who was going through some rough patch back in 2009, has completely rebounded, rebranded and all but positioned itself as the banks’ retail forex platform of choice. 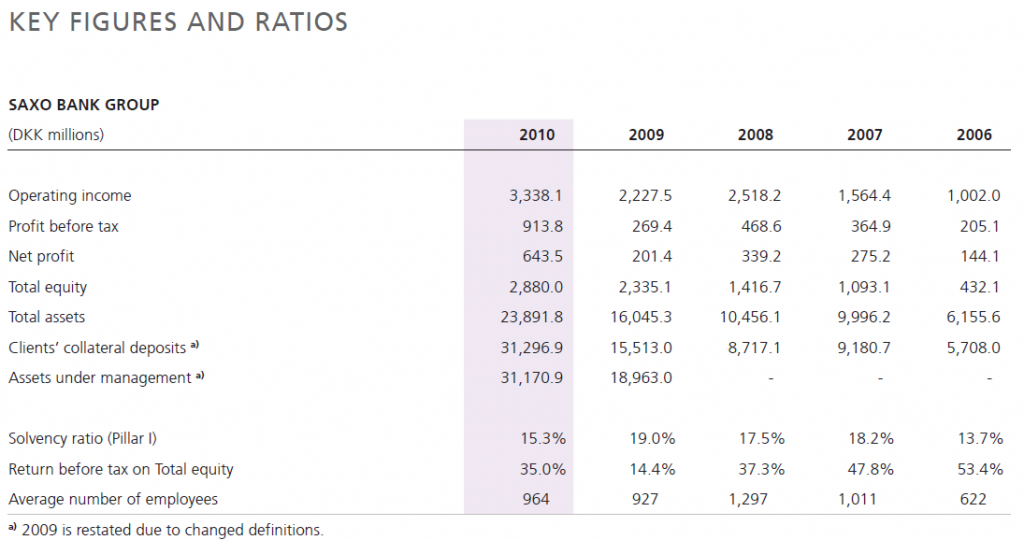 The founders and CEOs of Saxo Bank, Kim Fournais and Lars Seier Christensen, said in a joint statement:

“Since autumn 2008, Saxo Bank has been implementing a transformation plan with the aim of maintaining growth while simultaneously ensuring profitability and efficiency. The external events following the financial crisis and the performance posted in 2010 prove that our initiatives are steering the Bank on the right track. We consider this year’s results very satisfactory.

“Saxo Bank will continue to focus on maintaining its technological advantage in the financial industry and will open more local sales offices through acquisitions or as green field start-ups with a view to improving client sales and service”.

Here is something you can find within the pages regarding the Barclays deal:

“Over the past several years Saxo Bank has gained industry recognition for its online trading platforms, multi-product offering, prices and services. This year, the Bank was especially recognised for its White Label business. Saxo Bank was awarded the top spot by subscribers of Profit & Loss, a monthly business magazine, and was also voted ‘Best Re-Labelling Platform 2010’. Saxo Bank was also chosen as ‘Best White Label Solution Provider’ at the World Finance Foreign Exchange Awards 2010, acknowledging the Bank’s long-established programme of investment and innovation within its White Label business”.

“Saxo Bank reached a major milestone in developing the institutional business in December 2010, when Barclays Stockbrokers Limited entered into an agreement with Saxo Bank, whereby the Bank will produce and tailor an international equities offering that caters for clients of Barclays Stockbrokers. Another important step was reached when Saxo Bank entered into an agreement with Microsoft to design and tailor-make a trading platform, MSN Trader. MSN Trader, which is featured on Microsoft’s MSN Money website in the UK, was launched in November. Microsoft and Saxo Bank intend to expand the cooperation, with other MSN regions expected to follow in 2011.”

However, early February 2011 Barclays launched a Saxo Bank white labeled platform to supply their UK client base with an International Equities solution. The solution, which goes under the name “International Trader”, encompasses over 9,000 equities, 21 major global exchanges in 13 international markets and the Equities research solution. The release is marketed widely in the UK marketplace as well as to Barclays’ existing UK clients base, and has already seen considerable client pick up and.

For more information on the offering place click the link: http://www.stockbrokers.barclays.co.uk/?category=whatweoffer&usecase=landing61

Saxo Bank should be worth more than FXCM if they are doing an IPO. The most interesting part is page 35 (and forward)–this is how they look at themselves. Looks like Saxo Bank is the only one of the big FX players who has managed to diversify their business, while still maintaining a growing and profitable FX business. Just for the fun of it I downloaded the MSN Trader and it is just fantastic – no wonder they are number 1 within the White Label Space…….. actually the equity part of the platform is better than their Forex (which is… Read more »

I assume its cumalative over the years, from at least OpenBook’s launch in 2010

I assume its cumalative over the years, from at least OpenBook’s launch in 2010

On earnings Saxo makes 75% from FX and 24% from CFDs. Its black box is where this earning capability comes from, ie effective hedging/punting based on all its clients’ positions. The equities platform is impressive, a private bank or a domestic broker’s dream. Imagine you can buy Microsoft, sell Heiniken, buy Sony, sell HK Gas all in about 10 seconds from 1 account and Saxo do all the custody. And Saxo’s costs are about 1/100th of what you’ll pay thru JPM or ML. Still Saxo doesn’t make any money from cash equities, its there as a loss leader to make… Read more »