Saxo Bank, a Danish multi asset broker, has reversed its monthly downtrend, helping pare some if its recent losses en route to a stronger month during June 2016 – additionally, key metrics at Saxo Bank reached yearly highs, including its client collateral deposits, according to a Saxo Bank statement.

Saxo Bank’s 2016 volumes have been a mixed bag, waxing and waning throughout H1 – generally speaking the trend has been lower, after peaking at a yearly high of $12.9 billion in average daily foreign exchange (FX) turnover in January 2016. This gave way to an oscillating movement of volumes that ultimately grew during June 2016, climbing to $11.9 billion for the month.

The increase in trading volumes at Saxo Bank came despite the substantially increased margin requirements during the Brexit event. Clients of the Danish multi-asset brokerage have also managed to secure over €200 million in profits over the course of the massive volatility around the referendum on June 23rd.

This does represent a growth of 2.6% MoM from $11.6 billon set back in May 2016. Despite rescinding volumes last month, the group’s recent figures haven’t approached the yearly low of $11.0 billion that was seen back in March. Across a yearly timetable, Saxo Bank’s latest FX turnover in May 2016 was more upbeat, with a YoY growth of 8.2% from $11.0 billion in June 2015.

Furthermore, Saxo Bank’s total monthly volume also moved higher; climbing tepidly to $261 billion in June 2016 from $255 billion in May 2016 – this yielded a movement of just 2.4% MoM, though it did reverse and eliminate last month’s losses. Extending this analysis to a yearly interval, the latest figures also orchestrated a growth of 8.3% YoY from $241 billion in June 2015. Despite a pronounced movement, June 2016’s total volumes were the highest at Saxo Bank since January 2015, when the Swiss National Bank crisis enveloped the industry. 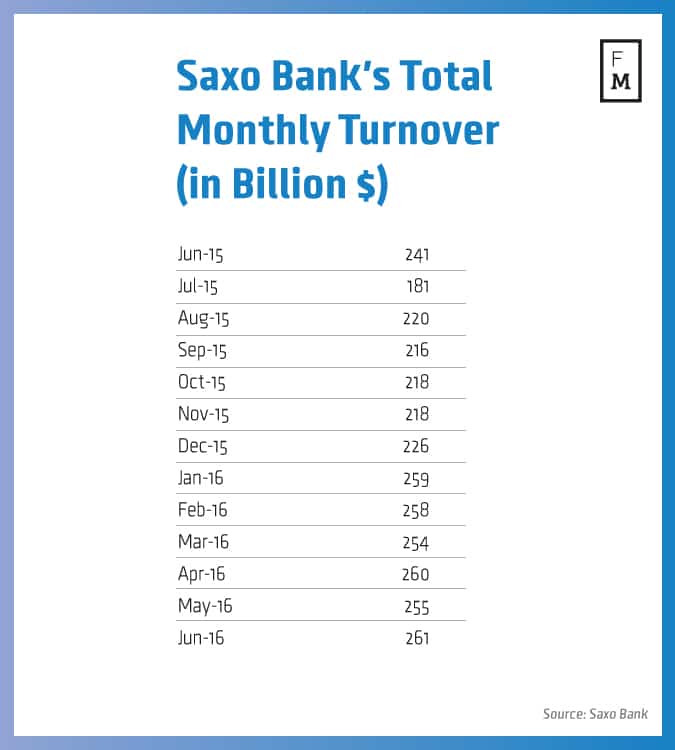