This is the third article in a four-part series which aims to dive into the various aspects of human resources in the forex industry and uncover the current and future trends. You can read the first and second article online now.

Over the past year, the European Securities and Markets Authority (ESMA) has been shaking up the foreign exchange (forex) industry. The regulatory environment has now become more demanding of brokerages and, as a result, professionals working in the industry.

Because of this, there has been a shift in what brokers are looking for – education and experience. Now, for roles that previously did not require a degree, such as the head of compliance, it’s now essential for candidates to have a legal degree just to be in the running in the United Kingdom and Europe.

While this might make candidates nervous, particularly those just starting out in the industry, it has actually resulted in a positive thing for professionals – salaries are exploding.

Brokers Are More Demanding, so Candidates Can Be Too

Speaking to Finance Magnates, Reece Pawsey, the Co-Founder at FinTop Consulting, a recruitment agency specializing in the forex industry, said: “as a result, salaries have increased massively, especially in the UK market. Compliance guys can request a much higher salary than most definitely what they would have got a year, maybe a year and a half ago.”

“If there’s any more uncertainty or any other big regulatory changes that may come out, for companies that maybe aren’t as prepared or companies that are looking to explore other regions, like the Cayman Islands, then candidates will consistently ask for more money. Equally, it’s all about supply and demand.”

According to a report from Global Recruitment Solutions, a provider of human resource solutions, in 2016 a Chief Executive Officer in Cyprus could expect an annual salary of anywhere between €70,000 for the lower end, up to €150,000, with a middle salary around €100,000.

So what can professionals expect now? According to Ioanna Vlassi, an executive director and owner of Unirec, a firm specializing in strategic consulting and executive searching in finance and fintech, salaries have increased dramatically in the past two years. She argues that there hasn’t been a recent boom, but the spike actually happened in the past two-three years and salaries have been consistently high since then.

From her experience in Cyprus, Vlassi has seen an overall increase of 30-35 per cent in salaries during this time for senior positions, with some positions seeing an uptick of up to 50 per cent. Back in the day, an average salary for a compliance offer was around €2,000 per month (€24,000 per year) in Cyprus. Now, that’s more likely to be around €5,000 per month (€60,000 per year), or even higher – with Vlassi pointing out she has seen positions such as Head of Legal raking in more than €10,000 per month (€120,000 per year). This lines up with the figures given by Global Recruitment Solutions. 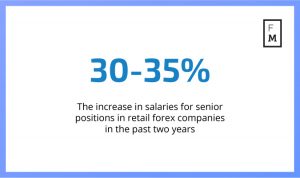 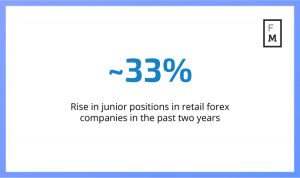 Specifically, she said: “Definitely the demands [of brokers] have changed. Companies are very eager to recruit the best people in the industry, so they pay for that.”

According to data compiled by Glassdoor, the average base salary a forex trader can expect is £62,483 per year (around £5,207 per month) for professionals working in London.

How Will a Potential Market Consolidation Impact Salaries?

In the wake of ESMA regulations, a lot of industry participants believe the forex industry will go through a consolidation. This means the smaller and less established brokers will not be able to withstand the increased regulatory costs and demanding environment and will go out of business or abandon their European operations – leaving only the biggest brokers left standing.

So what does this mean for salaries? Well, it appears it is a double-edged sword.

“I don’t think some small brokers without the expertise, the systems, the background the ability to adapt in this new demanding environment will be able to survive. The costs will be higher for sure and that increases the high salaries of the professionals who know how to develop a good regulatory strategy to be able to save the company and make the company survive in this demanding environment,” said Vlassi.

However, if smaller brokers do have to abandon their EU-operations, that means more people will be out of work. This will have the opposite effect on salaries as brokers will have more candidates to chose from and less market competition.

“I believe if the consolidation happens which is what everybody is expecting, we will definitely have a drop in salaries and we also might see people changing industries and maybe moving again into crypto,” she added.

Even if there isn’t a market consolidation, Vlassi believes the regulation will add balance, stating that the current growth the forex industry is experiencing, including salaries, is unsustainable in the long-term. But for now, at least, all we can do is wait and see. Nonetheless, now is a good time to get into the forex market and capitalize on the rising salary trend – before it’s too late.

Owners will just have to give over more of their profits.

If they operate a half way efficient B Book model (of which 99% of them do.) it is completely sustainable.

In fact it might need to a more productive work force rather than the greedy penny pinching that normally goes on.