This is the second article in a four-part series, aiming to dive into the various aspects of human resources in the forex industry. Specifically, it aims to uncover the current and future trends. To find out what brokers are now looking for in candidates in the ever-changing forex space and more, read the first article in the series here.

Brexit, blockchain, cryptocurrencies and regulatory changes – the foreign exchange (forex) industry has seen it all. In the past few years – even in the past few months – the industry has completely changed, especially for retail brokers.

So where does that leave us – especially in regards to human resources (HR)? Will Brexit and regulation from the European Securities and Markets Authority (ESMA) be the death of the industry? Will brokers go elsewhere? Who are the winners and the losers of the whole situation?

The Brexit deadline is fast approaching and firms are itching to have a clearer picture of what the final outcome will be. With fears around a so-called “hard Brexit” still as present as ever, brokers and financial institutions are having to weigh their options.

So how has this impacted the way firms are hiring? Particularly in regards to citizenship. Are London-based brokers now only hiring UK citizens to avoid any future hassles? On the other side, are European brokers only hiring European citizens?

In Cyprus, Brexit appears to have had no impact whatsoever. HR specialist in the forex and wider financial industry, Nastasia Michael said to Finance Magnates: “I understand that there are so many questions regarding Brexit and how each country will arrange special arrangements regarding employees from the UK. But in Cyprus… I haven’t seen any changes; we’ll still hire people from the UK, we don’t see this as a change yet, because nothing is put into stone.”

Reece Pawsey, the Co-Founder at FinTop Consulting, a recruitment agency specializing in the forex industry sat down with Finance Magnates. In his experience, he said that he has not seen any change in brokers wanting clients with particular citizenship. This is despite fears that Brexit would negatively hurt UK jobs in the finance industry.

Specifically, he said: “In my experience, clients haven’t been shying away from people with an EU/ UK Passport. As clients are more focused on the candidate’s experience and how they can benefit the brokerage, appose to their visa status.”

With such big changes in the industry has there been a shift in focus in regards to the positions that brokerages are looking for? The general consensus is yes. At present, brokers in Europe and the UK are in need of compliance, legal and risk-based roles. As can be expected, this is a direct result of the changing regulatory landscape. With Brexit just around the corner, this is likely to only change further.

However, with technology and automation becoming more and more prevalent in the industry, information technology (IT) and engineering roles are also in demand. In addition, with the regulatory changes adding extra financial pressure, attracting more clients is more important than ever, which is also keeping demand for sales-based positions high.

“Towards the end of last year we had a lot of compliance roles come in, and that was obviously due to MiFID II and people getting ready for ESMA and GDPR over here as well. After that, a lot of salespeople now, especially in the UK… As a whole, definitely, compliance being the one that is most desired,” Pawsey said.

Changing of the Seasons

For some of the top brokers, the biggest areas of employee movement recently were in sales and support. Taking a look at data compiled from LinkedIn, a seasonal hiring pattern emerges. Over the past two years, the most common month for these brokerages to add new employees to their teams was January. 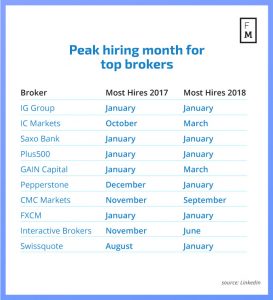 “There is a seasonal pattern for all industries. It’s the same pattern everywhere, including forex. A lot of hirings are happening in January/February,” Ioanna Vlassi, an executive director and owner of Unirec, a firm specializing in strategic consulting and executive searching in finance and fintech told Finance Magnates.

She also sights September and October as being popular hiring months. In November and December, positions begin to taper off and even more so in the summer months. This is in terms of both candidates looking for jobs and positions available.

As can be clearly seen in the graph below, January is a clear leader in terms of new employees added for some of the top brokers. Echoing Vlassi’s analysis, the numbers start to fall in the middle of the year, before picking back up towards year-end. 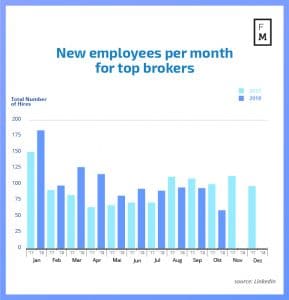 But, Are There Jobs across the Whole Industry?

The short answer is yes; there are definitely plenty of jobs to go around for forex professionals – both in Europe and more specifically, the United Kingdom – despite fears that Brexit was going to gut the financial industry in the region.

The HR department at ATFX also shared their insights with Finance Magnates, saying: “In UK, there are much more talents with professional experience in forex brokers than any other country. The talents are willing to take new ventures to move to another broker. It is a great market to hire marketing, sales, compliance officer and senior management… The U.K. is one of the most active markets in regards to the number of candidates per job.”

Vlassi added to this by saying: “The level of opportunity in general for professionals and for companies to recruit good professionals is there.”

However, while there are jobs to go around, as already mentioned in our first article, candidates need to offer more than they previously had to. Education, consistent, relevant experience and for those working in sales, an existing client book.