Wrapping up another month in the forex industry, we take a look at the major events that took place in October. Changing things up a bit in this column versus previous renditions, this time around we’ll focus on a few headlines and analyze their importance (you can call this my October thoughts on the industry). But, before we do this we will discuss a key general trend.

Without a doubt, the most important trend taking place in the forex market is a return of volatility and volumes. Beginning in September, volumes have rebounded from what had been an altogether weak 2014. When reporting volumes for our Q3 Forex Industry Report, our estimates for the June to August period of the retail sector were the lowest three month periods in two years. Specifically, Japan had hit a wall with many brokers experiencing 6 month consecutive declines in volumes through August. But, we all know that changed in September.

During October, every broker or trading venue issued stellar month-over-month growth for September. Early figures reveal that October forex trading remained active, but overall numbers are expected to be flat or slightly below September’s figure. What is worth noting is that unlike the year plus long period of August 2013 to August 2014, for the first time in a while, the forex market is witnessing follow through activity. Meaning that unlike in the dry spell where a broker’s month was being swung by one or two events, only to see trading fizzle immediately, high impact days are being followed by continued volumes and volatility. The trading action reveals a return of speculation among traders to the asset class which bodes well for the rest of the year.

We all know that a rising tide floats all boats. Among the boats moving higher is ICAP’s eFX platform EBS. In October, ICAP reported average daily volumes (ADV) on EBS above $100B for the first time since June 2013, as they totaled $117.9Bln. The figures reveal a strong rebound from the multi-year low of $68.5Bln traded this past April (see chart below). So is the EBS rebound here to stay, and is their mix of providing both an ECN (EBS Market) and relationship-based liquidity (EBS Direct) on one platform a winning formula?

While providing optimism, we aren’t convinced that EBS volumes are slated to experience continued growth. Despite recent talk from ICAP Executives about the uptake for EBS Direct, this isn’t the first time they’ve been bullish on their products. In 2013, similar optimism was noted about the strengths of their ECN after they had applied new dealing changes, including among items a widening of spreads, but deeper liquidity per tick.

However, despite a proactive attempt by senior EBS staff headed by their CEO Gil Mandelzis to explain the benefits of their offering to old and existing customers and banks around the world, 2013 and 2014’s results proved that their message had mostly gone unheard. For the most part, EBS has remained a last resort venue, as known by its users, where available liquidity could be found during periods of increased volatility. That reputation continued to hold as September’s strength coincided with EBS’s two most traded currencies, the euro and yen, experiencing a spike in volatility.

While intriguing with its combination of EBS Markets and EBS Direct, their offering isn’t unique, with many aggregation products existing in the market. In addition, as technology costs have declined, advantages to accessing the interbank FX market using ECNs have diminished. As a result, before willing to declare that EBS has finally broken out of its multi-year decline, we are awaiting to see how the platform performs during a quieter period, and whether customers will shun the product for lower spread alternatives.

Just barely making it into October was Friday’s announcement that GAIN Capital was acquiring City Index for $118Mln. The two firms have a past history as GAIN purchased US accounts from City Index when its subsidiary brand, FX Solutions, exited from the country. The terms of the deal were similar to those of GAIN’s acquisition of GFT which was a combination of cash, convertible notes and stock.

Following a 21% spike higher in GAIN Capital shares, the deal is currently valued at $125Mln, or 12X City Index’s trailing twelve month EBITDA for the period ending September 3oth, 2014. Compared to City’s last filing available to the public for the period ending March 31, 2013, the broker was able to increase customer deposits by 27% to $344Mln over the past year and a half. However, profitability continued to be a problem with the broker despite rising revenues in 2014. As a result, for GAIN Capital, the deal really rests on performing cost reduction synergies to boost margins from City Index’s flow.

A slight loss in the acquisition terms was GAIN’s early release of their Q3 figures which showed record revenues of $102.8Mln and net income of $14.7Mln. The figures compare to $69.7Mln in Q2. While Q2 was a depressed period of trading in the forex market, Q3 started off even worse. However, the 47% increase in revenues show just how profitable market-making can be for brokers when volatility returns, even if it was only for one month, as was in September. As such, the potential of this deal will probably ride more in terms of whether September’s trading activity isn’t an anomaly.

Returning back to the deal, it’s worth noting that the offer wasn’t made by FXCM which has been very public about it being in talks with several parties, and we can assume had been in discussions with City as well. Yes, GAIN and City do have a past of working together, but why GAIN as acquirer makes more sense than FXCM is due to the vast majority of City Index customers trading on proprietary technology. City did announce two weeks ago that it was integrating its recent MT4 logins with its proprietary Advantage platform. That news makes more sense now as it has foreshadowed the broker’s efforts to unify its customers.

In regards to FXCM, the broker has shown interest in companies offering generic platforms as of late, with it providing easier integration to their servers. Recent examples are their purchase of US accounts of IBFX, Alpari and FXDD which were primarily MetaTrader 4 users. As such, we could be entering a period where despite the advantages of a broker operating their own proprietary platform, valuation-wise the benefit is minimal if any.

Speaking about valuations, October has created a new list of bitcoin millionaires. No, I am not talking about people who unlocked their old USB drives to find their old stash of bitcoins, but company founders.

During October, a record of nearly $80Mln in funding reached the sector, predominately by venture capital funds. The funding was allocated to companies across the board including bitcoin exchanges, wallet companies, hardware providers and payment processing companies. The funding all occurred despite bitcoin prices being well below their 2014 highs and trading most of the month bouncing between $300-$350. 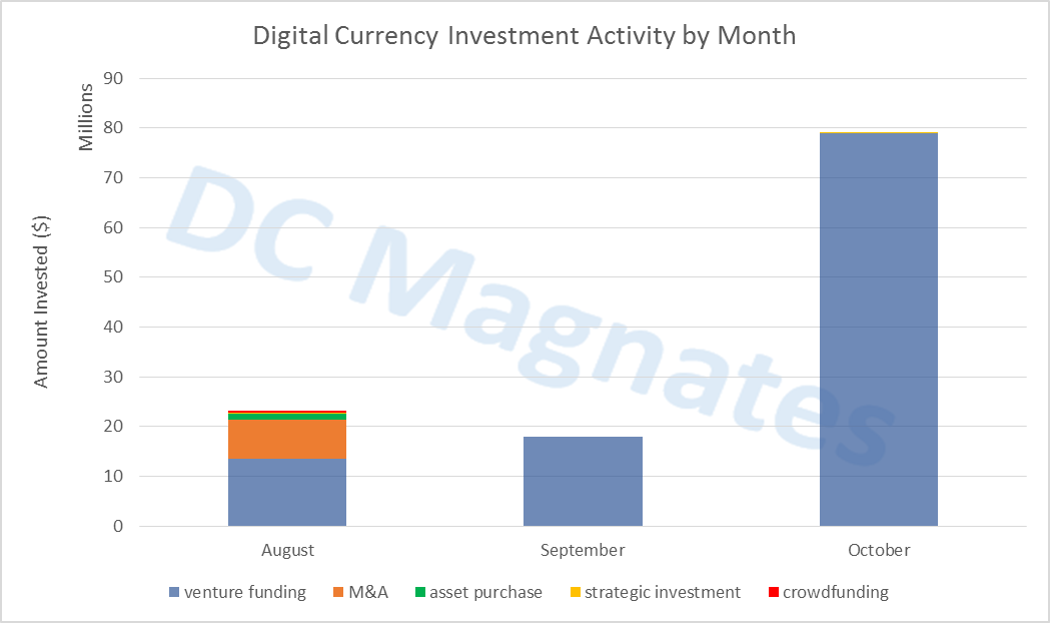 So why should we care? The jury is still out on whether any of these firms will provide value to their investors. However, what is worth taking note of is that these deals are funding the future infrastructure of an ‘all things digital’ world of finance. The dot com bubble of the late 1990’s brought all sorts of busts like Webvan, TheGlobe.com, and Pets.com, but emerging from it were Amazon, Ebay, Google and others which have changed the way we shop and use the internet.

As such, a similar trend appears to be taking place where we may not be feeling the changes to the financial industry being impacted by bitcoins and other digital currencies now, but in ten years, we can look back to all the seeds that were planted this year and how they have emerged to become key ingredients of how currencies are used.

Other Headlines Worth Noting:

Ah, too many cities.. I was reading another article on broker profitability and got this one mixed up. My bad.