October has been a record-breaking month for Bitcoin-related investment activity, with $78.9 million pouring into the industry. This is nearly double the combined $41 million from August and September.

There were 12 deals reported in October, while September had 6 and August had 8, according to the DC Magnates Crypto Deal Table.

Virtually all of the investment activity came in the form of venture funding, at varying stages (Seed, Series A, etc). 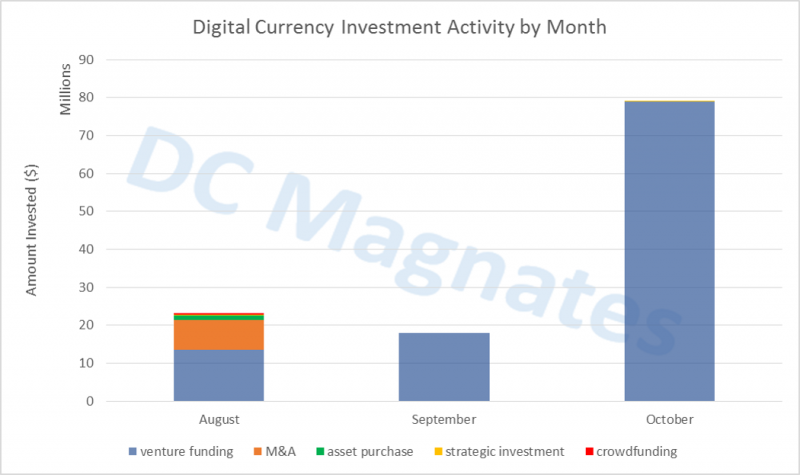 Blockchain saw the biggest contribution- $30.5 million, led by Lightspeed Ventures and Wicklow. Their round ranks among the highest all-time in the industry.

Continuing its aggressive expansion in the space was BitFury- both as investor and as investee. The mining giant got a $20 million injection from Bill Tai and Georgian Co-Investment Fund (GCF). This is in addition to another $20 million from GCF announced in June. They also invested an undisclosed amount into GoCoin, and did the same in September with BitGo.

Crypto traders will also be encouraged by venture capital steps to enhance their playing field. Melotic, a Hong-Kong based exchange with a focus of enhanced liquidity, got $1.175 million in a round led by Ceyuan Ventures.

Also notable was Coinplug’s $2.5 million, which it put together through local investors in South Korea. The company aims to be an all-in-one bitcoin portal, including a wallet, micro-payments, merchant integration, ATM and exchange service.