This is the first online retail forex volume survey report for 2010. Last report was released in August and estimated $118 Billion in daily traded volume.

Many things happened since and I made a few important changes in the current survey:

First and foremost I removed Gaitame – Japan’s largest broker from the list mainly because Japanese Forex market is by far the biggest forex market in the world and deserves its own survey. This however is almost impossible as Japanese brokers don’t tend to report their monthly stats officially or unofficially. I did get hold of a very detailed Japanese volumes survey however it is now a bit outdated and in any case those volume results are no longer relevant as Japanese FSA slashed forex leverage to 1:50 last year and would further slash it to 1:25 later this year. All I can say is that FXCM Japan used to be much bigger than FXCM US however this too probably changed when leverage was reduced.

Other changes I made included raising Oanda’s volume to $500B a month and I suspect the actual figure is even higher than that, especially given Oanda’s recent progress in Dubai, Korea and several other key locations.

FXOpen reported a surge in volume probably due to their new MT4 ECN platform and FXPro were added to the survey for the first time and are pretty big despite withdrawing from the US market.

With the recent US forex leverage earthquake I expect many more developments in the coming months and perhaps the figures in this table will be completely shuffled again. 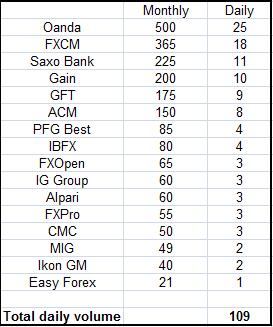 The numbers were officially, and to some extent unofficially, released by the brokers themselves or are based on industry rumored figures:

The figures are still incomplete as some brokers such as Dukascopy, FXDD, FX Solutions and CMS simply don’t report or disclose their numbers.