Within its six month interim results that were posted by IG Group this week, they provided a regulatory update. In terms of Japan, IG stated that, “The new regulatory regime for binary options came into force in December. Although it is too early to analyse the precise impact of the changes, on the surface they appear to be potentially negative for the overall binary options industry in Japan but positive for IG’s position within it.” Explaining the negative implications, they referred to the introduction of “an assessment of client product knowledge for new clients wishing to trade binaries,” which they believed “will inevitably make it more difficult to bring new clients to the industry.” They did add though that, “The clarity which this regulatory change brings may prove to be of lasting benefit to us.” 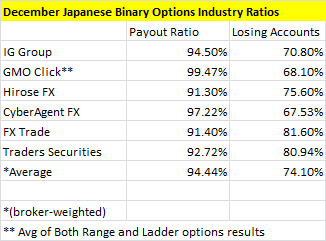 While the new regulations may create a more difficult environment to onboard new clients, it hasn’t had much of an effect on profitability levels of binary options trading in Japan. According to account profitability and average payout figure reports issued by Japanese brokers offering FX binary options, December numbers were similar to those of November.

In IG’s case, they experienced one of the largest changes for the month as losing accounts rose 4.7% to 70.8%, as average payouts fell to 94.5% from 99.1% in November. On the other side, CyberAgent FX saw their clients become more profitable with 67.53% of losing accounts during December, compared to 74.21% in November. Helping the figure was a rise in average payouts to 97.22% from 92.68%.

Among other brokers, GMO Click traders continue to experience the highest payouts with an average of their Range and Ladder option results calculating to 99.47%, with Range options reported as slightly above 100%. The Range options results represent that the broker netted a loss on trades in those products.

(Update: An earlier edition of this post showed CyberAgent FX client losses at 54.58%, the broker updated the figure to actually be 67.53%)

Share this article
Tags: brokers / Japan
Got a news tip? Let Us Know