IG Group has posted H1 interim six month results for the period ending November 30th, 2013. For the period, net trading revenue rose to £182.7 million, 8.1% above last year’s data. After tax profits came in at £71.7 million, a 22% increase from the same period in 2012. On a per share basis, the broker reported diluted EPS of 19.63p. The figures were in line with guidance provided by the firm in its ‘trading update’ given in mid-November, where six month revenues were seen to be in the £181.5 to £183.5 million range.

In terms of H2, IG stated that the period had started well during December. But they mentioned that they expected to experience higher operated expenses than the same period last year. In addition, they pointed out that record profits were achieved during H2 2013. As such, without outwardly stating it, between the lines it was apparent that IG doesn’t expect to surpass last year’s record revenues. On the overall news, shares of IG Group (IGG.L) opened slightly lower but are currently trading unchanged at 627.00p.

Commenting on the performance, IG Group CEO, Tim Howkins commented, “The performance in the first half was satisfactory, with revenue, profit and cash generation all well ahead of what was a particularly subdued prior half year. Importantly, we continue to make good progress in executing on our strategy aimed at attracting and retaining active traders, broadening our offering and product set and developing the business globally. I believe the investment over the next few years in a number of exciting and key long-term initiatives will help us to deliver good levels of growth into the future.”

Beyond the numbers, IG also provided an update on different parts of its business. Some of the main items:

MetaTrader 4 and Spread Betting: The recently launched platform was said to have a “Slow but steady increase in the number of clients using the platform to trade” with them, adding that “It will take some time before we overcome perceptions that we are a firm which does not offer MetaTrader”. The broker also mentioned that it will be expanding its product offering available through MT4, and specifically mentioned that they would be launching spread betting on the platform.

Europe shines: Perhaps one of the most interesting data points was that Europe (excluding the UK) was IG’s best performing region, with six month revenues there rising 25% to £40.2 million. The gains were based on 5% account growth taking place, combined with a 20% improvement in average revenues per client. In terms of client growth, Europe was the only region which experienced customer expansion during the six month period compared to 2012. The decline in overall account growth was partially attributed to the company’s increase of its minimum client deposit size.

Switzerland office and regulation: Speaking about Europe, IG commented that they are in an advanced stage to open a Swiss office and become licensed in Switzerland. However, they don’t expect trading to originate from this office until later in 2014.

US Regulation coming?: IG also stated that, “We are in reasonably detailed discussions with the regulator in another jurisdiction”. But, they added that, “For commercial reasons, until we have that clarity we do not intend to name the country concerned. However, this location is outside the European Economic Area and would, like Switzerland, entail a specific regulatory capital requirement.” While it is too early to speculate that they may be reentering the US, it is worth pointing out that had been marketing until the NFA increased minimum capital requirements of FCMs to $20 million. In addition, with their NADEX binary options exchange unit, they currently do have steady involvement with the country’s regulatory bodies.

Tighter regulations in Singapore: In its regulatory review, the broker stated that it expects Singapore to impose stronger limits on leverage for forex, but they had no estimation when this will take place. In Japan, IG commented that initial impact of new rules to binary options trading are a short-term negative for them and the industry, but a long-term positive as they expect to be better positioned to take advantage of the current regulations.

UK Stockbrokering initiative: In its regional breakdown (see below), IG posted rising revenues, but a decline of 9% in its active clients for the six month period. As its home market, the UK is a key part of the company’s results. As such, IG stated that it plans to expand its product offering in the country and launch a ‘cash equity service’. Expected to go live in the second half of calendar year 2014, the initiative is aiming towards providing services to long-term investors. On this, they stated that, “Our current products are ideal for the active short-term trader with the risk appetite for high levels of leverage, but this is only a subset of the active trader market. Within the UK, a large number of active traders use more traditional cash equities for trading.”

Mobile: Following the overall trend of greater mobile usage among brokers, IG stated that “Almost a third of all client-initiated transactions are now executed using mobile devices and in some countries this exceeds 50%.” As mentioned in our 2014 Industry Predictions article, IG is among brokers that has redesigned its mobile apps to conform to needs of mobile-only customer. 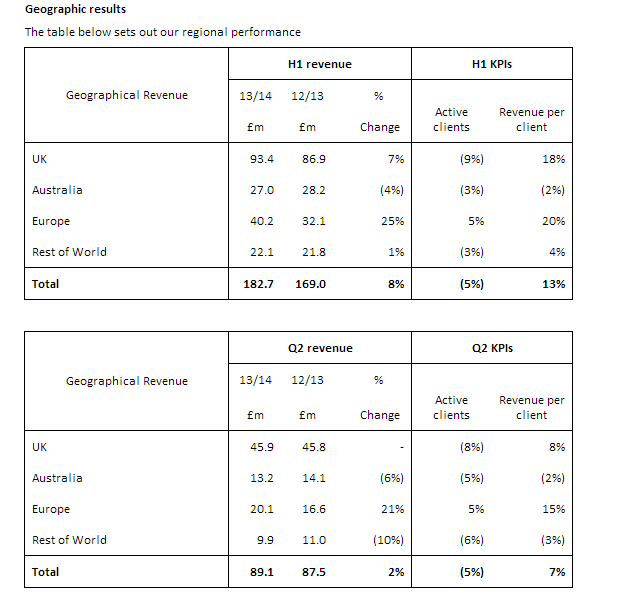