The Japan-based online brokerage operator GMO CLICK Holdings, Inc. has today announced preliminary totals for its February 2016 operating revenues. Results came in lower by ¥699 million month-over-month from ¥2,674 million in January, down to ¥1,975 million in February, a 26.14% drop from the start of the year. This follows the company having a better January when compared to the end of the 2015, as covered by Finance Magnates last month.

The last three-quarters have averaged ¥7,427 million per three-month period, where today’s figures mean that during March the company will need to see nearly ¥2,778 million in operating revenues in order to stay in-line with the prior 3 quarters trailing average. And, as the year-end results coming in for the company’s 2015 financial year-ending March 31st 2016 will be an important focus in coming weeks.

The dip in February shows that despite currency market volatility helping its trading volumes reach new records the increase didn’t help lift revenues for one of the largest retail FX broker’s in the world by trading volume. Finance Magnates had reported about the company’s trading volumes reaching $1.45 trillion (¥164.6 trillion) in February and which were 23.2% higher from $1.18 trillion (¥133.6 trillion) in January 2015, when the company reported binary options related trading figures.

Shares of GMO listed on the Tokyo Stock Exchange (TSE) under ticker 7177 were up 1.57% to ¥778 per share around the time of publication.  Below is an excerpt from the company’s press release today, showing the preliminary figures for February compared to prior months and quarters: 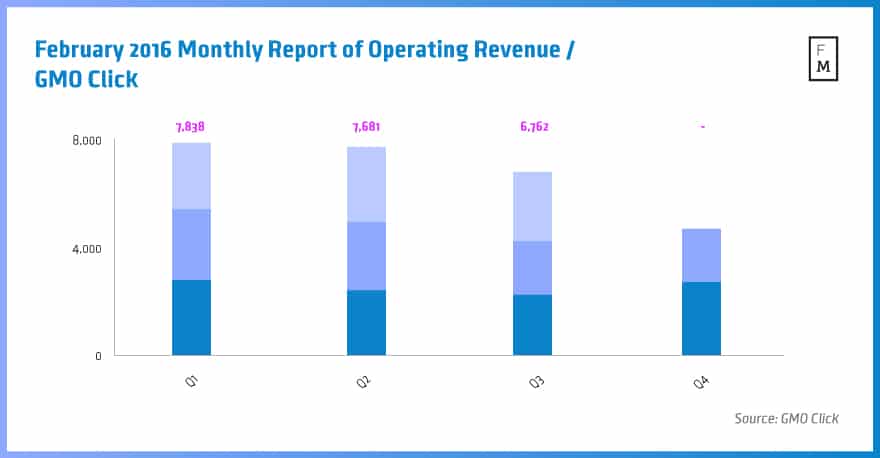