Within the retail review column of our Q4 2013 Forex Industry Report, a section was titled “Evolve or Die”. The section of the column discussed that much of the forex industry was struggling with a multi-year decline in volatility, and brokers are being forced to be innovative with their offerings, stating:

While the previous decade was rich in volatility, and nearly any market maker could put their stick in the ground and strike oil, current trading activity has made it a much more difficult environment for brokers. Market-making is still viewed as a profitable business, but more and more we are hearing from dealing desks that their success is tied to a two or three big days in the market each month instead of any semblance of consistency. As a result, there are becoming two classes of brokers; those whose fortunes (and long-term existence) is closely tied to volatility, and others that are branching out into alternative revenues streams.

Examples where the lack of volatility has put brokers on a death spiral after years of success were GFT and MIG Bank which sold their businesses for small premiums above their liquid asset values. On the other side of the coin, many brokers have been branching out into alternative offerings such as social trading, binary options, and/or B2B sales via liquidity or technology products. In addition, many firms have experienced success by expanding their operations into growing regions such as China, South East Asia and Central/Eastern Europe.

Following this trend and also to appeal to Asian traders, a popular offering from forex brokers (and futures exchanges) over the past two years has been the launch of Chinese yuan pairs. Offerings are nearly always in the form on being priced-based on offshore renminbi (CNH) contract Non-Deliverable Forwards (NDF). Since the beginning of 2013, major names such as Saxo Bank, LMAX, the CME and FXCM have begun to offer CNH denominated forex pairs along with many smaller players. Beyond interest from retail traders, CNH activity has been especially strong among larger players, as Thomson Reuters and FXall have cited it to be a key currency of growth during 2014. The bottom line is the availability of CNH trading which offers a marketable security to bet on the world’s fastest growing economy.

In the same vein, can Bitcoin become the emerging new asset for financial firms to market to their customers?

While a broker may have no interest in whether bitcoins have a real value or not, price charts with multi-percentage daily swings are attention grabbers. In the online retail forex sector, firms offering Bitcoin products include Plus500, FXOpen, AvaTrade, Anyoption and most recently InstaForex. More than just forex firms, the speculative potential has led Bitcoins to attract interest from Wall Street, such as hedge funds, multi-asset market makers and mutual funds. Among the most notable examples was the inclusion of SecondMarket’s Bitcoin Investment Trust in Fidelity Investments’ fund marketplace.

So far, results are mixed among brokers offering trading in bitcoins. The consensus has been that among existing customers there is little uptake of bitcoin trading despite active requests for it from traders as prices were moving. However, similar to the above mentioned CNH, several brokers have mentioned to Forex Magnates that offering Bitcoin trading has availed them the opportunity to market their offerings to new sources of clients and affiliates.

With the exception of FXOpen and its broker partners, bitcoin and litecoin trading is being offered in the form of a CFD. As a CFD, prices mimic those of market prices of bitcoins, but don’t provide actual delivery of the digital currency. However as CFDs, it provides flexibility of trading conditions, where brokers can offer both long and short trading as well as margin. The trading conditions are similar to other broker CFDs such as for crude oil and stock indexes. Unlike other assets though, bitcoins remain difficult to hedge, thus putting brokers at risk if their exposure to the digital currency rises. But, as brokers aim to appeal to their trading constituency, providing comparable conditions to other products become important. As such, while it may sound reasonable to want to offer single-digit leverage and trading of actual bitcoins to customers, such an offering would contrast with a broker’s overall array of CFDs and high leverage trading instruments. 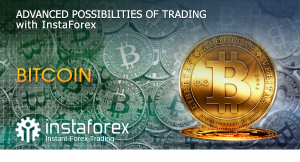 Overall, due to the newness of bitcoins and crypto currencies in general, what we are currently seeing are multiple streams of offerings being deployed by online brokers. On one side of the spectrum is FXOpen with its crypto currency accounts which include more than just bitcoins and litecoins. Customers can both deposit and withdraw digital currencies, but are limited in leverage allotment. This contrasts with brokers such as InstaForex which are featuring bitcoins like any other CFD and offer it with 25:1 leverage. In the middle of the road are other firms such as Plus500 and AvaTrade who offer trading in the form of a CFD, but depending on market conditions will limit leverage to the 5-10:1 range. In addition to those firms, taking a completely different approach is eToro, where the product is being marketed like a stock with appeal to longer-term investors, with only the ability to go long.

Among binary options providers, Bitcoin is also making an appearance. Interestingly, although known for their short-term gambling like products, binary options brokers have been mostly conservative with their Bitcoin offerings. However, this may have more to do with limitations of handling risk management than an aversion to Bitcoins. Nonetheless, in replacement of 60-second expiries which are the norm for the EURUSD, are prevalently two-week duration Bitcoin options. (Tradologic began to offer hourly contracts in March, but as of yet, only a handful of their white label brands have launched them so far).

So, are Bitcoins the new CNH? In a lot of ways they are similar as they provide a marketing tool to a new segment of customers and are leveraged to a hot market. But, like every other asset, Bitcoin’s future as a listed product on traders platforms will most likely be more dependent on its daily price swings, than its technology innovations.

Share this article
Tags: bitcoin / brokers / etoro / plus500 / traders
Got a news tip? Let Us Know