Thomson Reuters has released its March 2014 FX trading volumes today showing a continued decline in its Dealing, Matching and Reuters Trading but a reversal for FXall which led it to a new record. CNH trading volumes that set a record last month continued to grow strong and perform as one of the most traded currencies.

Thomson Reuters average daily FX Spot volume for the month of March 2014 was $110 billion (single count) as traded on Thomson Reuters Dealing, Matching and Reuters Trading for FX. This figure represents a 16% decrease year on year and about 2.7% decrease month on month.

Phil Weisberg, global head of Foreign Exchange at Thomson Reuters commented: “Robust trading volumes in March demonstrate the ongoing confidence that the FX community has in Thomson Reuters FX solutions and the leadership position we take in defining higher standards and providing reliable, efficient access to liquidity. We have seen continued strong performance across all our platforms in CNH which is now typically among our top four currencies on Matching alongside GBP, AUD, CAD and MEX and entered the top 10 traded currencies on FXall this month.” 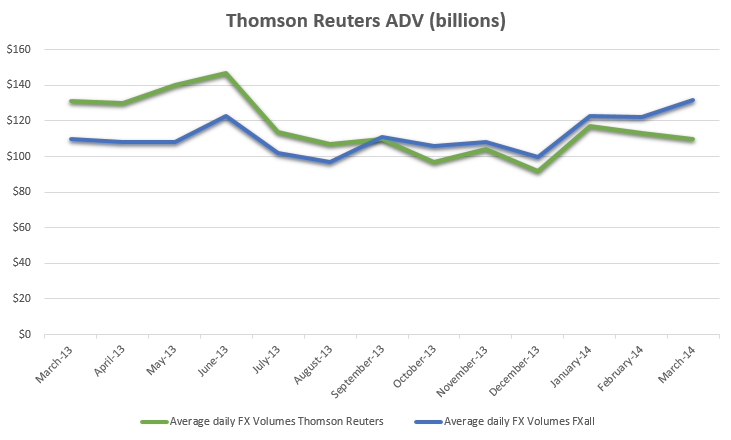 Share this article
Tags: cnh / fxall
Got a news tip? Let Us Know