International forex brokerage Alpari has reported its total trading turnover for August 2017. Jolted by escalating volatility across markets and a steady erosion of the USD, the group registered a healthy gain on a monthly basis en route to its highest figure of H2 2017.

August 2017 was characterized as a highly active month, especially when weighed against the normal seasonal lulls that afflict markets during the month of August. Tensions in North Korea ratcheted up, which helped spur markets and moved several currencies into safe havens. The USD continued its decline to multi-year lows against key majors, creating a highly dynamic market environment.

The total turnover in August 2017 at Alpari was reported at $120.8 billion, easily beating its July 2017 figure of just $106.1 billion – this was good for a growth of 13.8 percent on a month-over-month basis. The aforementioned factors were the paramount drivers of the group’s volumes. The group has seen its turnover edge higher for consecutive months.

Looking deeper into August 2017, the five currency pairs with the highest trading turnover were the EUR/USD, GBP/USD, USD/JPY, XAU/USD, and the USD/CAD. The EUR/USD rose to two-year highs as the dollar found itself under siege for much of the month, which itself saw its respective turnover rise 35 percent month-over-month. 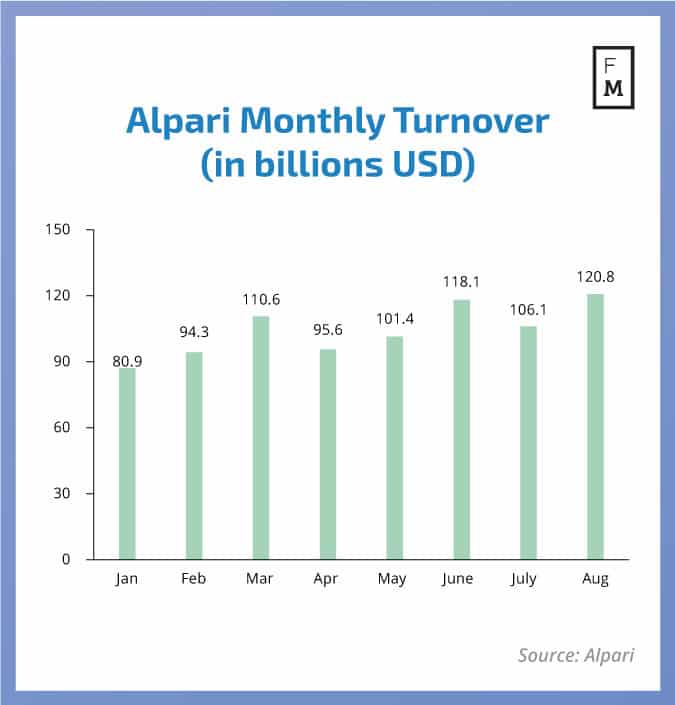 Meanwhile, ongoing Brexit negotiations and setbacks continued to create movement on the GBP/USD front, while the increased activity in the USD/JPY and XAU/USD were largely safe haven plays stemming from fear in the Korean peninsula.

The latest results from Alpari are building off a strong H1. The group recently posted strong H1 results, and the momentum carried into August. With the traditionally slow summer months now behind us, turnover is likely to see an even more pronounced move this fall. A recovery of the USD and unwinding of geopolitical tension could also come into play across the markets.