Although jawboning from OPEC member states has been enough to squeeze market shorts and bring oil prices back above $40.00 per barrel over the last few weeks, these remarks remain a minor distraction in the bigger picture outlook for the energy complex.  Ignoring the commentary and focusing on the fundamentals shows that inventories remain significantly elevated across the globe, with a new glut emerging in refined products as the impact of Chinese teapot refining exports are felt at ports around the world.

Now that inventories are back on the rise following traditional summer stockpile drawdowns, the threat of an output freeze has been enough to dissuade oil shorts at least temporarily.  However, on a more medium-term basis, lack of cohesion amongst OPEC members combined with rising US production and the possibility of resurgent Nigerian output could derail recent price gains, forcing crude back to the downside.

Markets have been preparing for the possibility of another discussion of a production ceiling amongst OPEC and select non-OPEC members in an effort to put a floor in prices that have remained volatile over the last few months. Although rumors about production freezes neatly coincided with a steep drop off in crude oil prices, trying to find a consensus amongst OPEC members these days is nearly impossible.

While plans are for informal meetings on the sidelines of an industry conference in Algeria set for the end of September, conditions remain tense.  Considering that major producers Saudi Arabia and Iran are at extreme political odds, Iran hinting that it might not make a decision on attendance until the day before the meeting could erase all recent price gains.

Despite Saudi Arabia torpedoing the last output freeze talks Doha, it could very well be Iran that walks away from the table during the upcoming round of negotiations as the Islamic Republic works to restore production to pre-sanctions levels.

Meanwhile, Saudi Arabian output continues to climb after reaching a record of 10.67 million barrels per day (bpd) in production during July.  Furthermore, they are expected to show further gains in August towards 10.90 million bpd, overtaking Russia’s 10.85 million bpd as the globe’s largest producer.

While part of this could be attributed to higher seasonal demand domestically, it could be intended as a move to maintain and grow market share during a time of extreme market turbulence.  Nevertheless, bringing all the parties, both OPEC and non-OPEC to the table and enforcing an agreement remains a distant possibility.

Outside of OPEC is the resurgent American growth and rising global inventories.  In the US, inventories rose by an astounding 2.501 million barrels last week after falling by a similar amount the prior week, marking the biggest stockpile build in 3 months.  Rising inventories have also been accompanied by increased domestic production, which was rising at the fastest pace since May of 2015 until falling by 57,000 bpd last week to 8.548 million bpd.  Additionally, a rising rig count could further complicate the outlook.

According to Baker Hughes data, from Friday August 19th, the oil drill rig count rose by 10 rigs, marking 8-straight weeks of increases, leading to higher production potential over coming weeks.  Considering all these factors with the possibility of a revival of 700,000 bpd in output from Nigeria, the stage remains set for oversupply to persist for the second half of 2016. 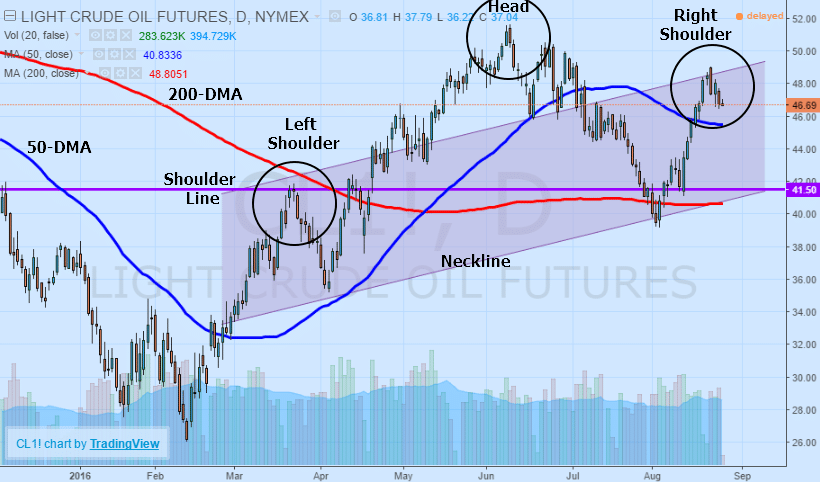 Looking at oil prices from a technical perspective, the bull market in prices remains intact, however, recent gains may be the product of a short squeeze and not necessarily fundamentals.  With CFTC data showing net long positions rising last week, it may indicate significant short covering.  Bearing in mind this factor, the current rally is only supported by few indicators, namely the moving averages which are trending below the price action.

Although OPEC members may release more tape bombs over the coming weeks to keep prices elevated, the smokescreen that is output freeze jawboning should be appreciated for what it is, namely a distraction.  With production levels rising globally and the possibility of rebounding Nigerian production in the fold, the major developments that could seriously derail recent gains in oil prices remains data related to output and stockpiling.

Should Nigeria manage to come to an agreement with the Niger Delta Avengers, it could see output revived, endangering any hope of a market equilibrium that keeps prices elevated.  With very few upside catalysts and significant downside risks, the most recent rally in oil prices may be nothing more than a short squeeze as the speculators reload short positions at higher prices.