The first batch of US economic data confirmed bullish jobs growth in January, but wages performed weaker than expected – how can traders benefit from this?

US economic growth is on an upward trajectory, and that spells good things for the economy at large. Between December 2016 and January 2017, the number of new jobs added to the economy increased by 227,000. This was markedly higher than the December figure of 157,000 new jobs.

The main areas of economic growth included construction-related activity, retail trade and finance. For the period in question, the consensus forecast among analysts was 175,000 new jobs, given that the December figure was just 157,000 new jobs added. However, the positive surprise boosted sentiment in the US economy.

The positive surprise boosted sentiment in the US economy

What’s Up and What’s Down in the US Economy?

The 227,000 new jobs created in the US economy in January is perceived positively. Traders are certainly bullish about this metric, and it reflects in the strength of the USD which is holding its own after a few weeks of lukewarm performance.

However, the Bureau of Labor Statistics (BLS) is quick to point out that wage growth in January performed weaker than expected. Analysts were anticipating growth of 2.7% in wages, but January wage growth only increased by 2.5%. This acts as a counter to the overall assessment of the US economy.

Combined with January jobs figures, the net effect of lower-than-expected jobs growth had a muted effect on the USD and trader sentiment. The actual period in question was December 2016 – the final month of the Obama administration. It comes as no surprise that economic sentiment has been dramatically boosted since the election of Donald Trump as president of the United States.

There has been a strong uptick in overall economic sentiment in the US since Trump came to power. Lofty promises of making America great again, massive fiscal stimulus, repatriation of US profits from abroad, lower corporate taxes, tariffs on imports, and an America first policy are driving traders to place call options across the board.

It is important to remember that the figures we are seeing now have nothing to do with Donald Trump’s performance as president of the United States. Everything that is being measured and reflected in the January data is a spillover from President Obama.

Traders who are looking to grade President Trump on his performance as commander-in-chief will have to wait their turn. The media frenzy around denigrating Trump’s performance as President of the United States is not backed up by any quantifiable data. We do know that the LFPR (Labor Force Participation Rate) of the US economy kicked up from 62.7% to 62.9%.

While this marginal movement may appear to be impressive, it is not. To have almost 37% of the workforce not engaged is a significant indictment of the health of the US economy. There are also other warning signs on the horizon in the form of the unemployment rate. This worsened from 4.7% to 4.8%. However, any figure below 5% is regarded as a full employment figure despite the LFPR stats.

Traders have many ways to capitalize on this avalanche of seemingly contradictory data. For example, the USD reacted strongly to NFP data and warrants call options when actual figures come in above expectations. 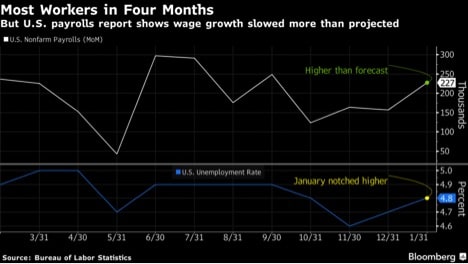 However, when LFPR data is released and it is bearish, this tempers any gains in the USD and it is reflected in currency pairs trading. By the same token, any improvements in the unemployment rate – less unemployed people – will boost the USD.

The US #dollar is up in reaction to the #nfp report. Safe havens – the #yen and #gold – have also gained. Read more: https://t.co/GikJ7oflDi pic.twitter.com/rUgUHZAzLz

This all plays well to hawks at the Fed. It gives momentum to policymakers at the FOMC who are looking to hike interest rates sooner, rather than later. Recall that the Fed has several overarching objectives: economic growth and full employment with an inflation target of 2%.

Every time unemployment numbers decrease, NFP data increases and real wages rise, there is a move towards higher interest rates. What we’re seeing now is mixed data. This paints a slightly confusing picture for the Fed, but we must not lose sight of the most important aspects of the US economic data releases.

What we’re seeing now is mixed data. This paints a slightly confusing picture for the Fed

It should be pointed out that the January figure of 227,000 new jobs was the best performance of the US economy since September 2016. The areas of the economy that improved the most in January 2017 included the following:

This sector increased by 18,000 new jobs, down from the 41,000 new jobs created in December. Over the past 12-month period, the health care sector has added an incredible 374,000 new jobs. However, traders will the cautious about investing too heavily in the sector as major changes are expected with the potential repeal & replace of Obamacare.

Already we are seeing major health care providers revising their contracts with clients in the wake of the Trump administration’s call to dramatically alter the status quo.

Meanwhile, this sector increased by 30,000 new jobs in January 2017. Over the past 12-month period, the industry has added 286,000 new jobs. This is typically a sector of the economy that performs well when the overall economy is doing well. Restaurants, fast food, bars and other franchises have performed well in 2016, and more of the same is expected.

Employment in this space increased by 23,000 in January 2017. This figure dovetails with the average growth in the sector per month.

Construction jobs increased by 36,000 in January 2017. The construction industry was largely unchanged in December, with most of the gains coming from trade contractors (+11,000 new jobs) and residential construction (+ 9000 new jobs). Over the past 12-months, construction has added 170,000 jobs to the economy.

This is an area where traders will want to focus their attention in 2017. With all the fiscal stimulus expected this year and throughout the Trump presidency, we can expect construction activity to spike dramatically. The bulls will certainly be charging in this sector if Congress passes spending bills.

This will bode well for trading activity with call options on stocks like Wells Fargo & Company, Bank of America, JPMorgan Chase, Morgan Stanley, Goldman Sachs and the like.

We can expect these figures to improve, and all attendant industries powering this growth will rally

The Takeaway for Traders

The overall prognosis for the US economy is positive. If we can look beyond the protests and the executive orders that have aroused the ire of liberals around the country, there is plenty of reason to celebrate. US economic growth remains strong, and the economy is fundamentally sound.

We are now seeing the highest number of new jobs being added to the US economy in 4 months, despite a slowdown in wage growth. If the Trump train gathers momentum, we can expect these figures to improve, and all attendant industries powering this growth will rally.

This article was written by Idan Levitov, VP trading for anyoption.com. Read more by Anyoption here.