Over the past year, waves of regulations have made certain regions appear less appealing to retail traders, with Europe being a clear example of this. However, as Finance Magnates has previously analysed, Europe’s pain seems to be Australia’s gain.

As you may be aware, the European and Securities and Markets Authority (ESMA) implemented leverage caps and marketing restrictions for a number of financial instruments in the retail trading space.

These restrictions were implemented for a period of three months, however, already the regulator has renewed the prohibitions a number of times, and may continue to do so indefinitely until they are made permanent.

These restrictions have taken a toll on brokerages operating in this sector. It’s now more expensive and much more restrictive for financial institutions to operate in this space and European and United Kingdom financial licenses are starting to look less and less appealing.

Amid Tightening Regulations, Australia Rises as a Safe Haven

One country, which appears to be the ultimate benefactor of this situation, is Australia. The land down under has the benefit of being a developed country and therefore, has a developed trading market. However, it lacks the highly-restrictive regulation found in Europe.

The local regulator in the country, the Australian Securities and Investments Commission (ASIC), has been ramping up its efforts to create a fair and honest market for retail traders, however, as of yet, it has not put in place leverage caps for contracts-for-difference (CFD), foreign exchange (forex) and cryptocurrencies, as well as marketing restrictions for CFDs and binary options.

As a result, the market has started to view Australia as a safe haven in terms of regulation. However, with rumors surfacing that ASIC might start to go down the route of ESMA and impose leverage restrictions – could Australia’s status as a safe haven be about to end?

Speaking to Finance Magnates, Paul Derham a Partner at Holley Nethercote Commercial & Financial Services Lawyers, said: “I think Australia is a fairly coveted jurisdiction. I think the regulator ASIC is very aware of that and is applying strict questioning to new entrants, who are applying for licenses.

“Asking things like ‘are you going to be targeting European clients directly?’ They’re directly asking questions like that. So there is an overall goal at an international level to reduce regulatory arbitrage.”

Anthony Griffin, Managing Director of OANDA Australia, added to this by saying: “Right now, Australia is very much viewed as a safe-haven for brokers, however we believe this will change in the coming years.

“In September last year, the government introduced a Bill into the Australian Federal Parliament that, once passed, will afford ASIC product intervention powers, allowing them to ban high-risk products such as binary options and cap leverage at levels similar to other major jurisdictions.

“However, while few would disagree that this is an important piece of legislation, it will likely take some time for the bill to pass given the current political climate and the upcoming election in May.”

Safe Haven or Not, Australia Still Has Strict Rules in Place

Although Australia is considered to be a safe haven, that doesn’t mean it’s easy to become licensed in the country. For financial institutions wanting to offer CFD or FX trading, they must first have an Australian Financial Services (AFS) license.

The process of acquiring one of these is both costly and can take a significant amount of time. As Finance Magnates previously reported, from July 1, 2017, until June 30, 2018, the number of applications for AFS licenses was 1,728. From this number, 758 were approved, which is a 44 percent success rate. 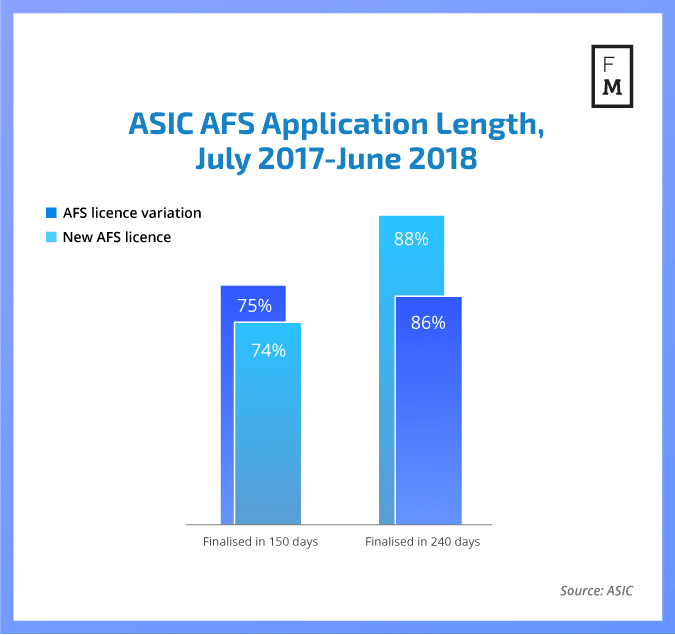 Derham also suggests that to get a license from scratch, brokerages and financial institutions are looking at paying around AU$100,000 (around US$70,600). This includes AU$50,000 for the license application and another AU$50,000 for the legal documentation required.

But this is just for compliance and legal fees and doesn’t take into account the additional costs relating to insurance, audit, derivative trade reporting, bridge, platform and more. Furthermore, Derham outlines that the biggest fee is the cost of competent, experienced staff on the ground in Australia, with a problem-free track record working for regulated brokers.

Commenting on the current regulatory environment in Australia, Griffin added: “The good news is we are starting to see greater scrutiny around new licence applications, so while the Australian regulatory landscape still has some way to go when it comes to the OTC derivatives market, it is becoming harder to set up shop in the interim.”

Regarding the rumors that ASIC might be following in the footsteps of ESMA, Derham had this to say: “I think there is truth in the rumours because ASIC wants to reduce regulatory arbitrage. I think the industry is trying to self-regulate as best it can but whether or not ASIC uses its powers to reduce leverage and impose some of those ESMA-like requirements. No one knows.”

Sophie Gerber, the Director at Sophie Grace, an Australian compliance and legal consultancy business for the financial services industry, and TRAction Fintech, believes that if there are any changes from ASIC, it’s not expected to come in the short-term.

“There are a number of reasons we could expect there to be a change at some point in the future, the primary one being that Australia is a member of IOSCO and will be expected to follow their recommendations at some point. However, I would not anticipate that there will be movement on the issue until after the issue has first been finalised by the FCA and/or ESMA,” Gerber noted.

“The difficulty with introducing more regulation is the need for monitoring and enforcement that comes with it. I think it is important that the current regulations relating to the space are seen and perceived to be enforced well before the introduction of further measures,” she continued.

Finance Magnates discussed this topic at the iFX EXPO in Hong Kong on the Beyond the Basics: Opportunities in APAC panel earlier this year, which featured Paul Derham, Eugenio Accongiagioco MD at APAC Management Consultancy, Marcus Fung the CEO of Invast Global HK and Avner Ziv, the CEO of ZotaPay.

In this panel, we discussed this exact issue – will ASIC be implementing leverage restrictions? The overall opinion was no, at least for the short-term, however, in the long-term things are less clear. You can watch the panel here.

I wont add much more intelligence to this discussion – which can be summed up as , No, Yes, maybe, not now – but some observations = Halifax fell over, hitting account holders with over $200,000,000 unable to access their funds – BBY fell over a few years ago – as well ASIC can take its time to watch the play out of how reduced leverage impacts client loss metrics – but that ASIC has raised more funds via industry fees and is chasing down rogue financial planners and removing them from the industry [similar business model and % number… Read more »