The top brokers in the foreign exchange (forex) industry are constantly changing, although, there are certain brokers that consistently dominate the markets. However, the massive regulatory changes to the sector in the European Union (EU) threatened to throw out that balance – so which brokers managed to stay on top?

Well, it is fair to say that EU based brokers or firms with an EU focus were clearly hit by the regulation. However, there was one broker that did manage to maintain its dominance throughout the whole year, despite it being a UK-based firm.

This is, of course, none other than IG Group. According to average monthly volumes, IG Group consistently topped every quarter from Q4 of 2017 up until the third quarter of this year, and most quarters had a comfortable distance between second place. 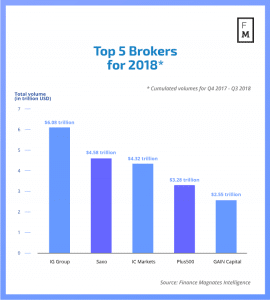 On August 1, 2018, the European Securities and Markets Authority (ESMA) introduced restrictions for contracts for difference (CFD) trading. This included marketing and leverage restrictions.

The rise of the Aussie brokers

Whilst the regulations within the EU have drastically changed the forex industry, the changes were limited to the region. As a result, during the second and third quarter of 2018, we saw the rise of Australian-based brokers.

One such broker is IC Markets, an Australian-based online forex broker firm. During the fourth quarter of 2017 and the first quarter of this year, IC Markets was in third place in terms of FX trading volume, behind IG Group and Saxo Bank, averaging $285 billion and $329 billion per month in the fourth and first quarter respectively.

However, IC Markets moved up the ladder to second place during Q2 and Q3, stealing the spot from Saxo Bank, with an average monthly FX trading volume of $399 billion and $428 billion, respectively.

While this coincided with the ban on selling binary options to retail investors in the EU taking effect in the second quarter and the later restrictions on CFDs in the third quarter, whether IC Markets directly benefitted from the regulation is debatable.

Retail investors look outside of the EU

However, as Finance Magnates has previously reported, many retail investors who previously chose firms within the EU for their investments did look to outside regions where they could choose their own risk, such as Australia.

It is interesting to note that Pepperstone, another forex broker in Australia experienced an almost identical pattern. In Q4 of 2017 and Q1 of 2018, Pepperstone was in eighth place, averaging $167 billion per month and $216 per month in fourth and first quarter respectively.

However, in Q2, Pepperstone jumped up to sixth place with an average monthly volume of $219 billion, and in the third quarter made it into the top five with $212 billion. With Pepperstone, it is easier to draw conclusions as to whether the broker benefitted from ESMA, as the firm mostly made its way up the ladder only as a result of EU-based firms reporting falls in their FX trading volume, as its average monthly volumes didn’t increase drastically during the two quarters.

One EU-based broker, in particular, that embodies the pain inflicted on brokers by ESMA, is FXCM, a retail forex broker based in the UK. In terms of trading volumes, FXCM was in fifth place in the final quarter of 2017, with an average monthly trading volume of $194 billion.

In the first quarter of 2018, although FXCM fell down one place on the ladder, its average monthly volume increased to $233 billion. However, it was all downhill from then, slipping to $199 billion in the second quarter and falling down to $174 billion in the third quarter, pushing it down to seventh place.

You need to correct the article: IC Markets is not an ECN broker. Ask them and confirm it yourself. But for the sake of clarity, think of the mechanics of an ECN as working just like an exchange. A broker offers an ECN-like environment if and only if a trader can act as both a liquidity consumer and provider. The latter is achieved by going on the bid/offer on the inside market, that is, placing resting orders inside the spread for other ECN participants to match against and thus contributing to spread improvement. Not only that, but this style of… Read more »