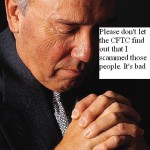 The CFTC complaint, filed under seal on July 2, 2009, in the U.S. District Court for the Northern District of Georgia, alleges that, from at least January 2004, Gresham solicited more than $15 million from more than 75 customers to trade off-exchange forex contracts. Gresham allegedly claimed to prospective customers that he was successful trading forex because the “Lord had blessed him.” Gresham also told prospective customers that he was offering his program to a limited number of fellow Christians for a limited time, according to the complaint.

Gresham, according to the complaint, solicited some customers to invest supposedly by opening and funding an account for them based on their friendship over the years. After receiving a string of emailed statements showing purported extraordinary monthly returns – of between four and 13 percent – many customers began to contribute their personal funds into accounts with Gresham.

Gresham allegedly persuaded some customers to temporarily withdraw their retirement funds by telling them that he could earn five to 10 percent a month on these funds. He claimed that by doing so, customers could attain profits in less than 60 days. According to Gresham this would enable them to transfer the principal — and expected large profits — back into the retirement accounts before an early withdrawal tax penalty would be assessed. Additionally, Gresham told customers that their risk was limited because he was a conservative trader; he told a least one customer that her investment with Gresham was insured by the federal government and the biggest forex exchange in the United States.

According to the complaint, as the Bernard Madoff Ponzi scheme unfolded in late 2008, Gresham communicated to concerned customers that all their funds with him were safe and would be returned to them when due. The CFTC alleges that these statements were lies because Gresham never had sufficient funds on hand to return all customers’ principal, much less purported returns on their investment. According to the complaint, Gresham lost money in the limited forex trading in which he engaged, and any purported profits paid to his customers came from either existing Gresham customers’ original investments or money invested by subsequent Gresham customers.

The complaint alleges that, at most, slightly over $2 million of the more than $15 million that Gresham solicited from customers was deposited into Gresham’s forex trading accounts. Of this slightly over $2 million amount, more than $1.4 million was withdrawn by Gresham. At least 14.4 million, therefore, was either misappropriated by Gresham or returned to his customers as part of the Ponzi scheme.

In addition, the complaint names as relief defendants Werner H. Beiersdoerfer, and Interveston Wines, LLC, both of Calera, Alabama, and Kirk M. Gresham, Gresham’s son, of Newnan, Georgia, because they allegedly received funds as a result of Gresham’s fraudulent conduct to which they have no legitimate entitlement.

At the CFTC’s request, on the same day the complaint was filed, U.S. District Court Senior Judge Jack T. Camp froze Gresham’s and the relief defendants’ assets and allowed the CFTC to seize all relevant records in their possession. A preliminary injunction hearing was set for July 23, 2009.

In its continuing litigation, the CFTC seeks disgorgement of ill-gotten gains against the relief defendants. It also seeks restitution, disgorgement, civil monetary penalties, and permanent injunctions against further violations of the federal commodities laws and against further trading as to Gresham.

The CFTC notes that Gresham has no known connection with Gresham Investment Management, LLC, a registered commodity pool operator and commodity trading advisor.

The CFTC thanks the U.S. Postal Inspection Service, Fort Worth Division, and the U.S. Attorney’s Office for the Northern District of Georgia for their assistance in this matter.