After 2013 and 2014 proved to be strong years for tech IPOs, this year’s crop of companies going public have struggled to find demand for their offerings. In the fintech space, this was most recently seen through the IPO of mobile payment firm Square, whose shares were priced lower than initial expectations. With this backdrop, the year’s final fintech and technology IPO, Chinese based P2P lender Yirendai, struggled with demand on the US markets following going public on Friday. The IPO was the first in the US by a Chinese P2P lender, and was based for 7.5 million American Depository Receipts (ADR), representing two ordinary shares.

Pricing shares between $9 to $11, the stock opened at $10 and after briefly trading above its IPO price, spend most of Friday hovering below $9, before closing at $8.99. Although sporting strong revenue growth for 2014 and the first nine months of 2015, the weakness in shares may not be all that surprising given the public markets’ lack of demand for marketplace lender stocks. Having gone public at the end of 2014, shares of both LendingClub and OnDeck Capital have been underperforming throughout 2015, with prices currently near their all-time lows.

Nonetheless, if any marketplace lender was viewed as having a shot to gain a positive it was Yirendai, due to its connection to China, offering an opportunity for investors to gain exposure to the country’s strong P2P lending market through their shares. According to Yirendai’s SEC accounting filings, for the first nine months of 2015, revenues grew 10x to $137.98 million from $13.12 million in the same period in 2014. That growth followed the similar growth that took place in 2014 compared to 2013. 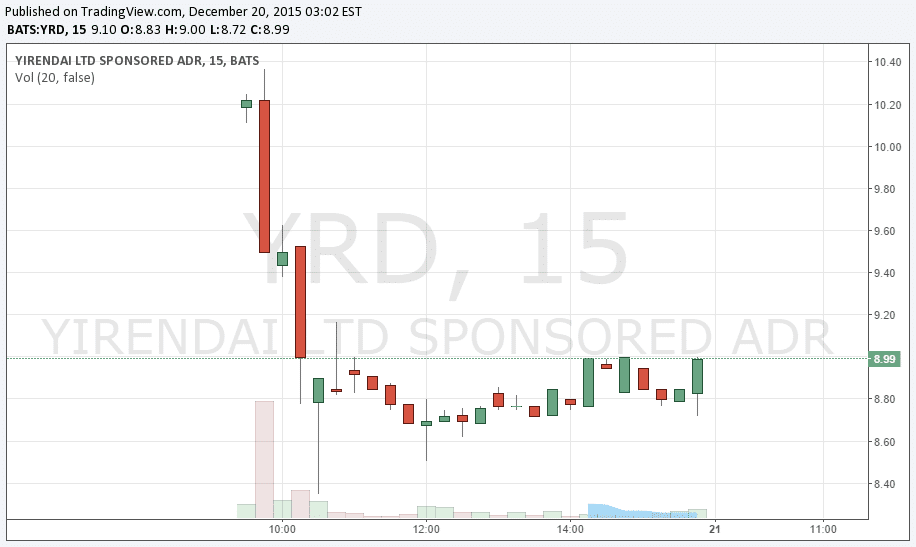 Majority owned by CreditEase, a Chinese financial conglomerate with business lines of wealth management, lending and credit management, Yirendai is the firm’s consumer facing P2P lending brand. Focused on personal loans, Yirendai loans for such things as home improvements, weddings and travel. According to the lender, since launching in 2012, $1.38 billion has been borrowed on their platform to 98,546 borrowers from 185,704 investors.

Despite a strong market for alternative loans in China, several recent developments may have caused US investors to be more cautious of Yirendai shares. Factoring into this are questions of whether the Chinese government will crack down on marketplace lenders. Listed among the IPO’s risk factors are regulatory concerns as the Chinese government has yet to put specific rules in place for P2P lending.

Even without formal rules, the government is taking the initiative in monitoring companies. As such, several lenders have been closed down for providing risky investments, while others have been contacted to refrain from lending to borrowers that use the funds to invest in the stock market.