United States Mint sales of 2014 silver coins rose by 49 percent in November from last year to total 3.4 million ounces sold in November. Silver prices tumbled to four-year lows early on in the month, triggering excess demand for the metal and a global shortage as consumers scrambled to purchase silver coins and bars.

This resulted in the US Mint announcing it had temporarily sold out of its American Eagle silver bullion coins due to increased demand, with combined sales of American Eagle and Buffalo coins totalling 72,500 ounces. Sales this year have increased by 0.2 percent from 2013 with 41.5 million ounces sold November tied with September for the third-highest monthly sales of the year, according to data on the agency’s website. 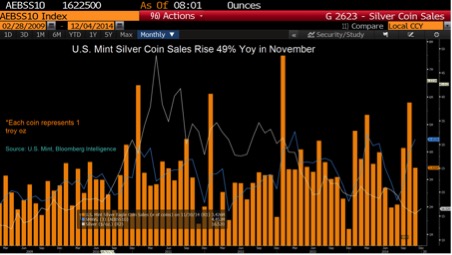 The attached charts show the comparison of the total bullion ETF holdings across gold, silver, platinum and palladium from 2010 to now. It can be seen that gold has been on a downward trend since mid-2012 as people have offloaded their holdings as the price of gold has dropped from the record high in 2011. Gold ETF holdings have fallen 8% this year to date and have fallen to five year lows.

What is interesting in this chart comparison is the apparent negative correlation between gold and the other three precious metals. The upward trends on silver, platinum and palladium has increased as the price weakened, a contrast with the gold ETF market where holdings have fallen along with the metal’s price.

For example, silver ETF holdings have climbed to a record high as the price of silver fell 5.9% in October. Palladium holdings have risen 38% this year and platinum holdings surged more than 50% after a new South African ETF was launched in April 2013.

Share this article
Tags: commodities / silver
Got a news tip? Let Us Know