The capital spillover effects from Bitcoin to competing altcoins are continuing to create amazing trading opportunities in the cryptocurrency market. Over the past twenty-four hours the main top competitor to perform is Litecoin, which completed a rise of over 32% during the day.

After only last week we reported about LTC/USD jumping from around $4 to almost $8 before returning to a level of $6, the price of the first altcoin is now about $12. Litcoin trading volume was remarkably high as well, with about $255 million exchanged over just twenty-four hours period, many times more than the average daily volume. As a result of the rise in price, the market cap of Litecoin is now a bit over $600 million, making it the fourth most valuable blockchain asset once again. 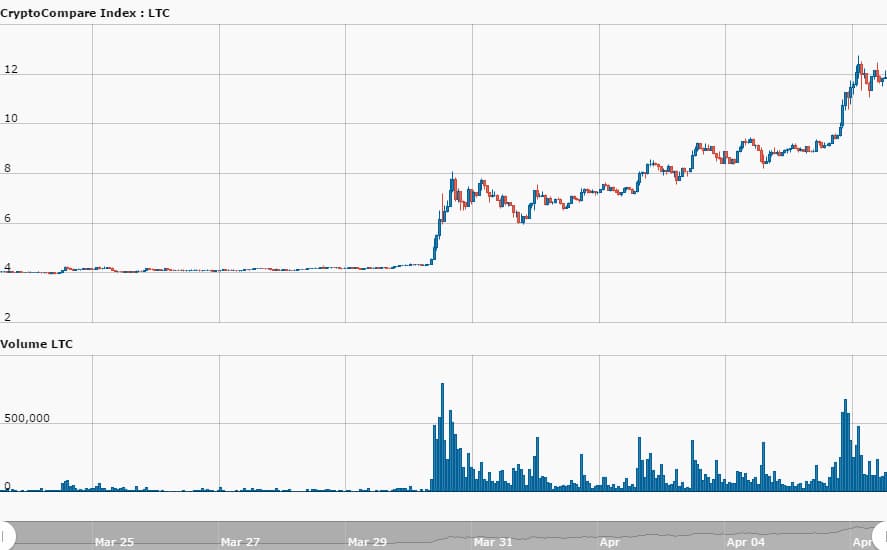 Charles Hayter, the CEO of CryptoCompare.com, explained how SegWit implementation is behind the move: “Litecoin has come alive with the prospect of pipping Bitcoin to the post in adding scalability solutions. Its volumes are off the chart and are showing a strong fiat flow increase for 2017.”

If you are not yet aware, the background for all the recent jumps in altcoin prices is the fear of a possible hard fork that will split bitcoin into two warring camps. As the transactions backlog is growing fast and it is taking more and more time to send funds, the community is torn between two solutions to the block size issue : Bitcoin Core (SegWit) and Bitcoin Unlimited.

Share this article
Tags: litecoin
Got a news tip? Let Us Know