Bitcoin Cash (BCH) has roughly doubled its price since we last reported on it on Friday. The price of the recently forked cryptocurrency has reached a price level near to $1800, giving it a market value of about $30 billion – 30% that of the original Bitcoin (BTC) and higher than Ethereum.

#BitcoinCash is what I started working on in 2011: a store of value AND means of exchange. https://t.co/OPC3TQ2fQK

Bitcoin and Bitcoin Cash will coexist and serve different use cases, just like Bitcoin and Ethereum. Its not a zero sum game. Work on building your project, not on destroying the other

Meanwhile the BTC/USD rate has been crashing, falling from a high of almost $8000 to under $6000. The reason most investors associate with this trend is that some backers of the now cancelled SegWit2x are switching their support to Bitcoin Cash. This in turn has lead for huge demand for BCH, mainly by Asian traders.

After BTC to BCH became the most popular transaction on Shapeshift, the instant exchange had to temporarily suspend Bitcoin trading due to a huge backlog of orders leading to a flood of complaints about delays from users. 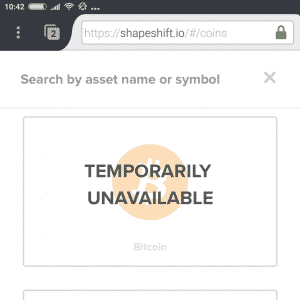